As gang-related shootings and stabbings in the Capital surge, soup kitchen manager MARTIN STONE says: ‘Don’t blame austerity for the homeless on our streets – blame the middle class cocaine users’

An Edwardian Baptist church in a prosperous and leafy North London suburb is not the sort of place you would expect to have to wear a stab vest.

But the fact that I have to wear body armour for my own protection at the Muswell Hill community soup kitchen I run speaks volumes about the real crisis driving Britain’s homelessness problem: not cuts or austerity, but an epidemic of drugs.

I was advised to start wearing protection after a notorious local drug dealer turned up wielding a chain with lumps of metal wedged into the links like an improvised medieval mace. 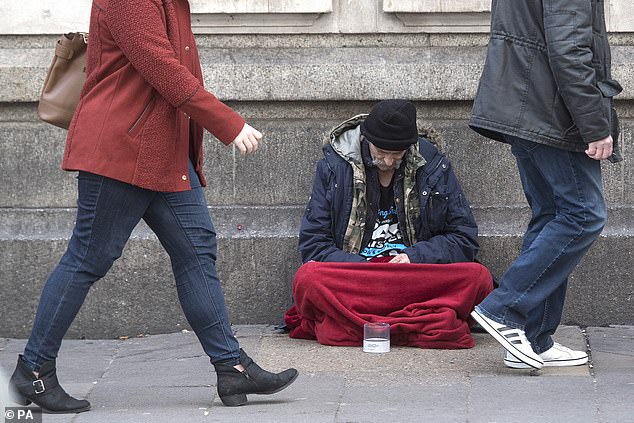 Harrowing: Martin Stone, the manger of The Muswell Hill Soup Kitchen, has to wear a stab vest for his own protection when dishing out food to rough sleepers

I’m 64 years old, resilient and prepared to put my head above the parapet for what I believe in.

But when I tried to stop him entering the church for the safety of those already inside, the dealer lashed out, catching me across the legs with his chain and slicing me open.

Thankfully, colleagues ran out to help and police quickly arrived at the scene.

The man hasn’t been seen here since.

The incident may have been defused quickly with little lasting harm done.

But while it lasted it was terrifying.

It was also instructive about the central problem driving homelessness and street violence. 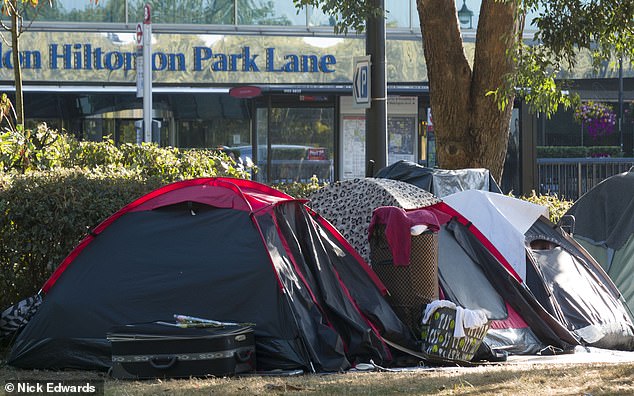 Cocaine: Middle-class drug use is fuelling London to be the cocaine capital of Europe and is behind the homeless on our street, according to Mr Stone

I take time to speak to many of the homeless people who come to our soup kitchen. I hear a lot of heartbreaking, hard-luck stories about promising lives derailed.

But scratch the surface and almost all of the homeless I meet have one big problem: addiction.

So it was no surprise to me to learn that the dealer who attacked me is a drug user himself, a rough-sleeper caught up in a vicious cycle of selling drugs to fund his own habit.

I was quite literally standing in his way, which made me an obvious target.

Others will doubtless not be so lucky.

I have huge sympathy for people living on the streets.

By profession, I’m a lecturer and writer on social housing.

I was a volunteer at this soup kitchen for 12 years and now I run the place.

I’ve often heard that austerity is to blame for the very obvious rise in homelessness and rough-sleeping in our towns and cities over the past few years.

But cuts in Government spending rarely make people live on the streets – in my day-to-day, hands-on experience, drink and drug abuse does.

I work with many drug users and their lives are in chaos. 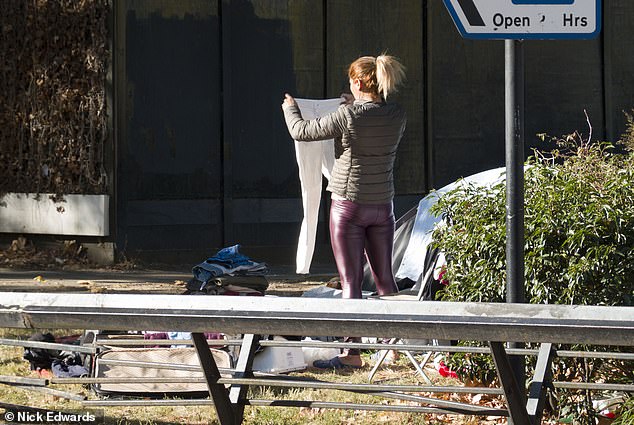 Austerity is not the problem: The charity boss said the only way to curb homeless is to tackle the issue at its root cause – stopping the £1 billion getting to drugs gangs on the streets

Often their health – physical and mental – is poor.

Their life expectancy is drastically diminished.

I have seen nothing sadder than the grieving parents I meet whose children have died because of drugs.

The waste, the tragedy and the misery makes me angry.

But the targets of my fury are not the street-sleepers but the smugly fashionable middle-class drug users who are fuelling this evil trade.

If there was no demand for a few lines of cocaine at well-to-do supper parties or on nights out after work, children would not be getting stabbed and shot pretty much every day in London and around the country.

People prefer to keep quiet about middle-class drug use but this is what drives the trade – the scale is staggering.

Only last week, it was revealed that London is the £1 billion-a-year cocaine capital of Europe.

People in the capital snort more of the drug than the populations of Barcelona, Berlin and Amsterdam combined.

Small wonder that there has been a surge in gang-related shootings and stabbings, and the recruitment of schoolchildren to be ‘county lines’ couriers from the cities to the shires. 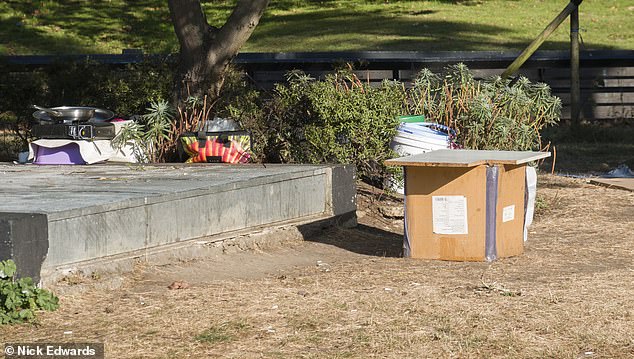 Stabbed: Mr Stone revealed how he was attacked by a drug dealer sleeping rough on London’s streets

It is all funded by middle-class cash, which means that those who blithely dismiss recreational drugs as a harmless bit of fun are either wilfully ignorant of the damage they cause or else they are unspeakable hypocrites.

Either way, they have the blood of children on their hands.

It is the elephant in the middle-class dining room. If you take away the well-heeled buyer and their easy money, the street violence will disappear in a flash.

That’s why it’s time we exposed the fashionable lie that cocaine and other drugs are glamorous.

Drugs aren’t harmless – they are highly destructive and it’s only by accepting this that we can start to build a culture where buying or using illegal drugs becomes socially unacceptable, as with drink-driving and smoking in public.

Public opinion can be changed. We need to create a sense of moral outrage at the terrible price paid by the poorest and weakest among us.

Is the reason that so few fashionable or powerful people speak out about drugs is that many have used them or know people who do?

I know one man who moved to Surrey because of the increasing number of shootings in his smart London street.

Yet that same wealthy individual, who works in the music business, would offer lines of cocaine at parties. 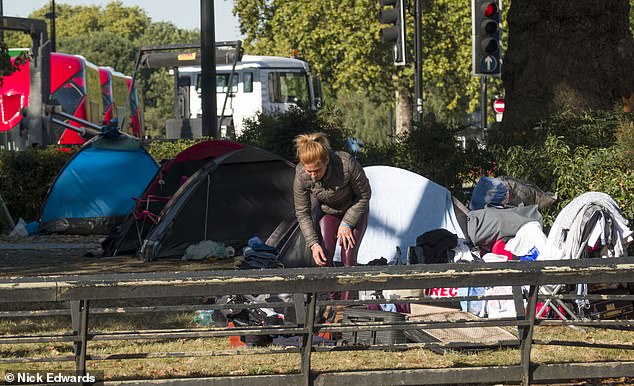 Homeless by choice: The soup kitchen manager said they could sleep in hostels but their spiral into drugs led them to remain on the streets

I’m sure he never made the connection between his drug use and rising gun crime, or link it to the sight of people begging on the streets, which has become the new norm in towns and cities over the past decade.

Don’t blame austerity when you see these people.

They are homeless by choice. There are hostels and beds available to help them, but most street-sleepers will have been banned because of their lifestyle: drug use, selling drugs or anti-social behaviour.

And they often die on the streets – the latest official statistics show the biggest increase in deaths among rough-sleepers last year was from drug-related causes.

I’m not finger-pointing because drug addicts have an obvious susceptibility. But sometimes people need to be protected from themselves, as well as other people.

That is why John Bird, founder of The Big Issue, was correct when he called for people to donate to homelessness and drugs charities rather than give money to street beggars who will probably use the cash to fund their drug habits. 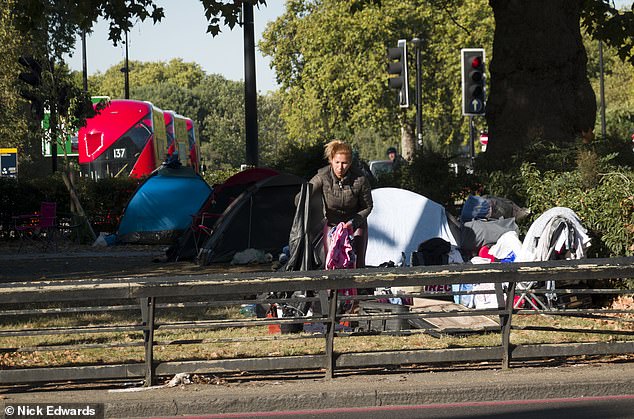 Death toll: Drugs have led to a raise in deaths in rough sleepers, according to Mr Stone

We must get people off the streets, off drugs and into the many centres that can help them.

Two years ago, I helped create a website, Next Meal, which uses GPS-location software to direct rough-sleepers to their nearest soup kitchen, hostel or shelter run by organisations such as Centrepoint, Crisis, St Mungo’s and the Salvation Army.

These places do fantastic jobs for thousands of people, including one man I know whose life was completely turned around by the brilliant Westminster drug outreach unit.

The website was recognised with a Prime Minister’s Points Of Light award last year for making a contribution to reducing homelessness.

But helping from the bottom up can only go so far.

Real change will be made by cutting off the supply of the money to drugs gangs – the £1 billion a year that is spent to keep wealthy Londoners supplied with cocaine.