Debate on transgender ‘issue’ has one thing missing

Before cisgender people offer their two cents on Elliot Page coming out as transgender, you might want to consider whether your voice is needed here. Because cisgender folks have already been a little too vocal this year over an issue that’s not actually about them.

First we had J.K. Rowling, who, after attracting ire for anti-trans tweets, published a crime thriller featuring a murderous "man in a dress" – an act of apparent transphobia that prompted Harry Potter stars Daniel Radcliffe, Rupert Grint and Emma Watson to distance themselves from Rowling and state their support for the trans community. 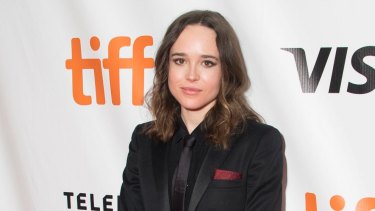 Actor Elliot Page has come out as transgender.Credit:Arthur Mola

Next, Eddie Redmayne weighed in. The Oscar-nominated star of trans biopic The Danish Girl (2015) made pro-trans noises but also defended Rowling against the "absolutely disgusting" backlash. Last month, John Cleese entered the fray, promoting accusations of transphobia after he too aligned himself with Rowling on Twitter.

The last few months have also seen trans politics consume British media, with veteran Guardian columnist Suzanne Moore claiming she was "bullied" into leaving the paper after voicing TERF (trans-exclusionary radical feminist) talking points. Closer to home, The Australian has disgorged a torrent of trans-themed content, publishing 68 articles, 92 per cent negative or hostile, during a six-month period in 2019.

Then there’s Honeybee, the hotly anticipated new novel by Jasper Jones author Craig Silvey, which turns out to be a transgender coming-of-age story. After several reviewers queried Honeybee’s depiction of transness, The Monthly probed Silvey on the politics of trans storytelling. The Monthly also published a feature by Waleed Aly that defended Rowling against accusations of transphobia, assuring readers of her "feminist" and "progressive" credentials. 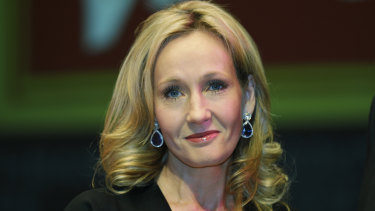 J.K. Rowling is one of the many cisgender celebrities weighing in on trans issues.Credit:AP

All in all, you can hardly open a paper or visit a news website without seeing the word ‘trans’. It’s the topic de jour. But you know what these stories have in common? Cisgender people. They’re all dominated by cis voices and centre cis concerns. Rowling, Radcliffe, Watson, Grint, Redmayne, Cleese, Moore, The Australian journalists, Silvey, Aly, the critics writing about Honeybee – all are outside the trans experience, looking in.

You know what’s missing? Actual trans people. In all the endless talk about transness, our voices are rarely heard. It’s almost as if the ‘trans issue’ only becomes newsworthy when powerful cisgender people choose to comment.

This situation is concerning, not just because Rowling et al spout transphobia, but because the centering of cis voices ignores and silences the real trans people who are the ostensible focus of the story. The word ‘trans’ may be everywhere, but when cis people do all the talking, this becomes just another form of trans erasure – akin to the casting of cisgender actors to play trans roles.

We trans people are endlessly spoken about, as though we were children or animals rather than fully-fledged humans expert on our own lives. The ‘trans issue’ is reduced to what cisgender people feel about transness, leaving little room for trans knowledge and experience. This is similar to the centering of white people – at the expense of Indigenous and Black voices – that too often characterises conversations about race. Again and again, discourse about marginalised communities remains dominated by the instigators of that marginality.

Rather than rehashing the same outsider perspectives, it’s time for cisgender people to realise this isn’t about them. It’s time to give up the mic and sit in the audience. There’s no shortage of trans voices out there, if you’re willing to listen. For starters, check out YA writer Alison Evans, novelists Jordy Rosenberg and Akwaeke Emezi, comic Krishna Istha, singer CN Lester, poet Quinn Eades, podcaster and writer Sam Elkin, actors Georgie Stone and Zoe Terakes, performer Mama Alto – and countless others besides.

It’s not that cis people can’t be useful trans allies; cis folks can and do use their platforms to advocate for trans rights. This is valuable work. The problem comes when cis voices become a deafening chorus that drown out trans perspectives.

Trans and gender diverse people want to tell our own stories. Just as women rail against mansplaining, and people of colour resent white-splaining, trans people are tired of cis-splaining that takes up all the oxygen. Cisgender celebrities have nothing meaningful to say about transness. They’re just famous people who take a bizarre interest in strangers’ private parts. They’re not contributing to debate; they’re punching down at a minority with eye-popping rates of suicidality and a tenuous grip on basic rights.

The problem is not limited to transphobes. Even sympathetic voices are apt to take up space better occupied by trans people. We don’t need cis-splainers to speak on our behalf; we’re more than capable of doing that ourselves – if only we could be given the time of day. Buy our art, boost our voices, hire us. Sit back and listen. We have important things to say.

Dr Yves Rees is a lecturer in history at La Trobe University.

Boar in a China shop: Wild beast charges through a tea store