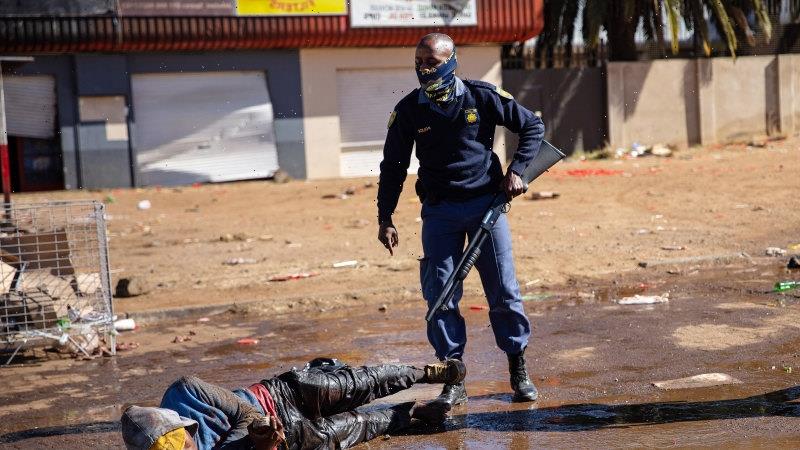 Death toll spirals in South Africa as desperation sets in

Johannesburg: The death toll climbed to 72 from rioting in South Africa on Tuesday (Wednesday AEST), with many people trampled to death during looting at stores, as police and the military fired stun grenades and rubber bullets to try to halt the unrest set off by the imprisonment of former President Jacob Zuma.

More than 1200 people have been arrested in the lawlessness that has raged in poor areas of two provinces, where a community radio station was ransacked and forced off the air Tuesday and some COVID-19 vaccination centres were closed, disrupting urgently needed inoculations. 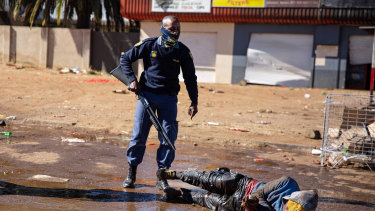 South African police force suspected looters to lie down and roll in muddy water after apprehending them in Soweto, Johannesburg. Credit:Getty

Many of the deaths in Gauteng and KwaZulu-Natal provinces occurred in chaotic stampedes as thousands of people stole food, electric appliances, liquor and clothing from stores, police Major General Mathapelo Peters said in a statement Tuesday night.

He said 27 deaths were being investigated in KwaZulu-Natal province and 45 in Gauteng province. In addition to the people crushed, he said police were investigating deaths caused by explosions when people tried to break into ATM machines, as well as other fatalities caused by shootings.

The violence broke out after Zuma began serving a 15-month sentence for contempt of court on Thursday. He had refused to comply with a court order to testify at a state-backed inquiry investigating allegations of corruption while he was president from 2009 to 2018.

The unrest spiralled into a spree of looting in township areas of the two provinces, although it has not spread to South Africa’s other seven provinces, where police are on alert. 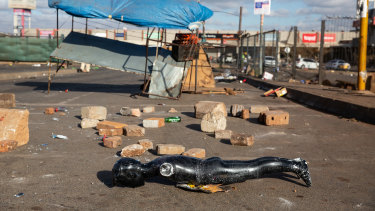 Barricades and debris are seen in front of a shopping centre in Vosloorus, Johannesburg. Credit:Getty

More than half of South Africa’s 60 million people are living in poverty, with an unemployment rate of 32 per cent, according to official statistics. The pandemic, with job layoffs and an economic downturn, has increased the hunger and desperation that helped propel the protests triggered by Zuma’s arrest into wider rioting.

As he spoke, the broadcast showed police trying to bring order to the Ndofaya shopping mall, where 10 people were crushed to death in a looting stampede. Gunshots could be heard in the background.

Makhura appealed for leaders of political, religious and community organisations to urge people to halt the unrest.

The deployment of 2500 soldiers to support the South African police has so far failed to stop the rampant looting, although arrests were being made in some areas in Johannesburg, including Vosloorus in the eastern part of the city.

At least 1234 people were arrested in Gauteng and KwaZulu-Natal, authorities said, but the situation was far from under control.

Looting continued on Tuesday in shopping malls in Johannesburg township areas, including Jabulani Mall and Dobsonville Mall in Soweto. There also were reports of looting in KwaZulu-Natal.

In Daveyton township, east of Johannesburg, more than 100 people, including women, children and older citizens, were arrested for stealing from shops inside the Mayfair Square mall.

Some of those arrested were bleeding from shattered glass on floors slippery from spilled milk, liquor, yoghurt and cleaning liquids that had been stolen from shops.

Running battles carried on as security and the police fired stun grenades and rubber bullets to push back rioters, who were entering the shops by going through delivery entrances, emergency exits and climbing on roofs.

How to Avoid Burnout in an It Company : An Interview With Blockchain Entrepreneur Bohdan Prylepa