Let’s go! Curious cub peeks through house door before mama bear drags it away after the duo scale a 15ft deck, pop a paddling pool and feast on bird seed during night-time visit

A naughty bear cub got a telling off from its mother after popping a family’s paddling pool during a night-time adventure, and was eventually dragged away from the home.

A family, who live in Boone, North Carolina, were woken up at 4am on August 10 by a young bear cub popping their outdoor paddling pool and snacking on birdseed.

The family decided to film the surreal encounter when the cub started walking towards the door of the house, trying to peer inside. 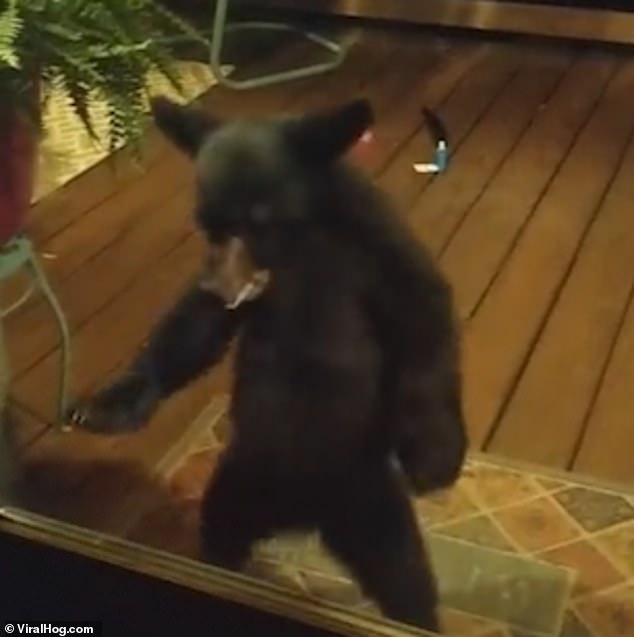 A family, from Boone, North Carolina, were stunned to find a young bear cub playing on their decking and peering into their home at 4am on August 10

Video footage shows the young bear walking across the decking during their night-time adventure before bravely approaching the glazed door of the house.

The curious cub stands on its hind legs and props a paw up against the wall to peer into the house and take a closer look at the family.

But much to the surprise of the woman filming, the cub’s mother scales the 15ft decking and climbs over the balcony to collect its mischievous offspring.

The woman is heard shouting: ‘Oh my God, here’s the mama!’

The mother grabs her cub and drags the animal away from the front door by its ear.

After the cub gets a telling off from its mother, the two bears disappear down the walkway at the end of the video – deciding not to brave the 15ft climb for a second time.

The homeowner said: ‘We had some visitors. We woke up to their pool party, birdseed snacking, and 15-foot deck climbing.

‘I think the cub wanted to come inside to hang out, but his momma wasn’t in the mood to deal with his mischievousness at 4am. 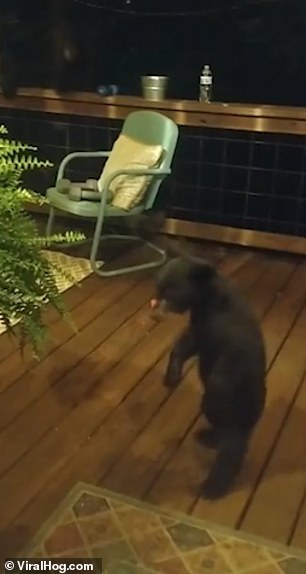 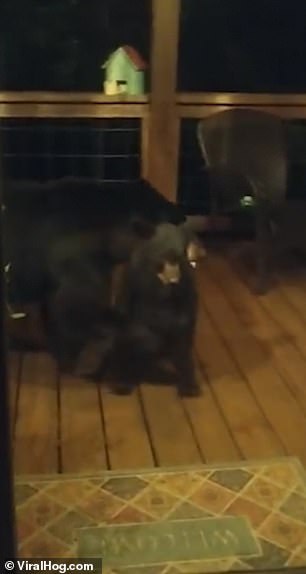 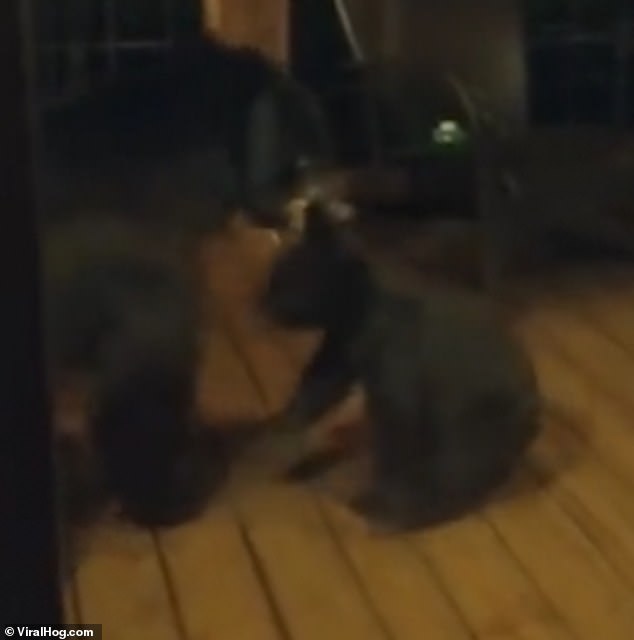 Before the mother bear arrived, the cub had already popped the family’s paddling pool and snacked on the birdseed, leaving behind quite a mess during the adventure

‘I thought the momma would come from around the walkway to find him, I never thought she’d scale our front deck.’

Before the family started filming the bear, the young cub had already popped the children’s paddling pool and made a mess chomping on birdseed.

The resident joked: ‘Little cub popped the girls’ blowup pool and they didn’t even bother to clean up their mess on their way out.

‘Guess I should have gotten the fire pit going for them if I were a good host.

‘Mom’s reaction in my head played out as “Let’s go, I have told you a hundred times not to bother people while we’re raiding their house for goodies. We have to be silent. I’ve told you this. Why can’t you seem to listen? I had to climb 15 feet up a pole to rescue your little butt. Get off their deck now”.’

One dead as magnitude 6.6 earthquake hits the Philippines