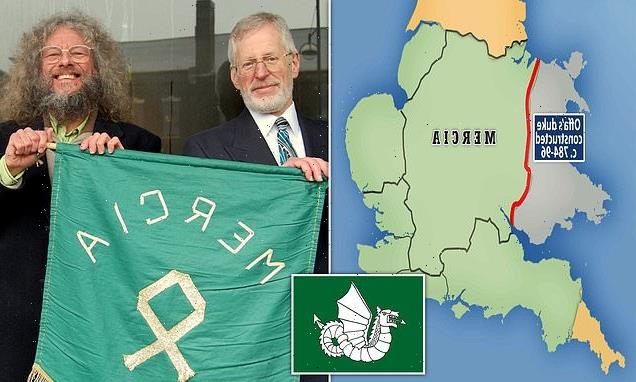 Could the Midlands LEAVE the UK? Meet 'independent Mercia'

EXCLUSIVE: Could the Midlands LEAVE the UK? The radical political group battling for an ‘independent Mercia’ devolved from England with its own government, laws and taxes

An impassioned 2,500-strong group of ‘citizens’ have formed a movement for the independence of Mercia, a region that roughly relates to the modern Midlands.

The Acting Witan of Mercia, more commonly known as Independent Mercia, is a radical political group based in the Midlands who believe the United Kingdom is in illegal control of the Anglo-Saxon kingdom of Mercia.

Independent Mercia claims to be the regions acting government, entirely devolved from England, and its de jure.

It has three aims for the region: organic democracy, ecological balance and co-operative community.

The group’s history stems from the Norman Conquest which it considers to be the beginning of an ‘English holocaust’ and the ‘rape of the land’.

The death of King Harold Godwinson at the Battle of Hastings in 1066 established the first Norman monarch of England and marked the end of the Anglo-Saxons.

Despite occurring almost a thousand years ago, the most famous battle in English history is at the very heart of what it means to be one of its ‘citizens’.

Jeff Kent, 70, is the convener of the Acting Witan of Mercia and one of its founding ‘citizens’.

‘We are just looking into the back garden where there are two jackdaws.

‘We feed birds where we live and they’re a pair, father and daughter, both with white markings,’ says Jeff from his home in Cotes Heath, Stafford, where he lives with his partner Sue Bell. 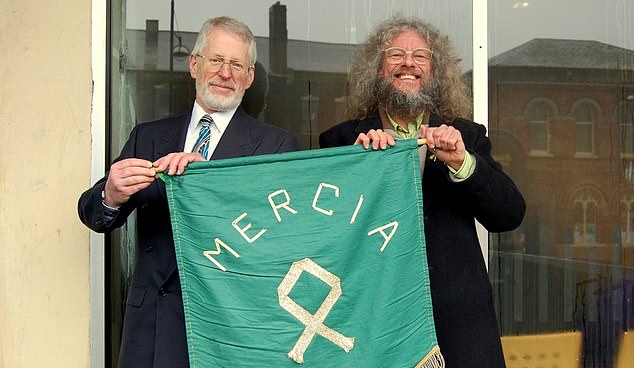 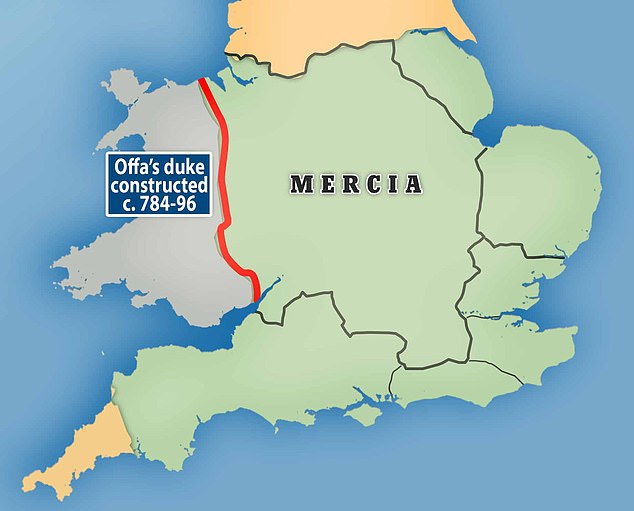 An impassioned 2,500-strong group of ‘citizens’ have formed a movement for the independence of Mercia, a region that roughly relates to the modern Midlands 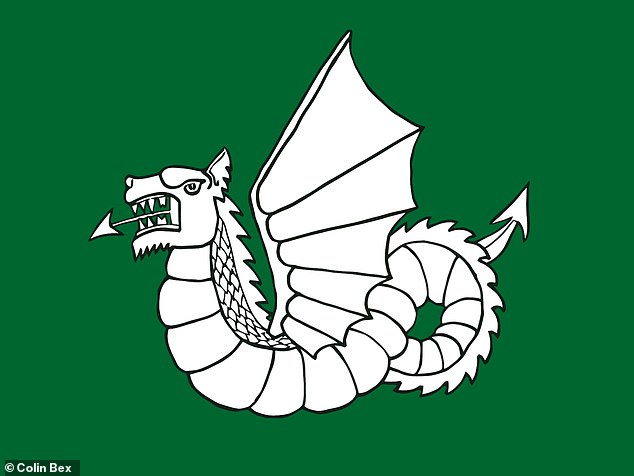 Jeff explains: ‘We start with the Norman invasion and the unfortunate loss at the Battle of Hastings.

‘The Norman Conquest and the English holocaust that followed. The theft, despoliation and rape of the land.

‘The Norman yoke which we tend to call now the Norman British yoke because of the passage of the time.’

Before forming Independent Mercia, Jeff was inspired by a number of works by historians including Christopher Hill’s The Norman Yoke (1997) and Denis Butler’s 1066: The Story Of A Year (1966).

‘Independent Mercia, in an important sense, is nothing new. It isn’t a novelty. It’s continuing a row that has gone on for almost a millennium,’ Jeff says.

‘Independent Mercia isn’t about history. It’s not trying to recreate something that was lost a thousand years ago.

‘What it is doing is identifying the key principles of Anglo-Saxon England and Mercia. That is: organic democracy, ecological balance and co-operative community.

‘It’s attempting to bring those wonderful, and very sensible, concepts which mean we can have a sustainable society for ever more.’ 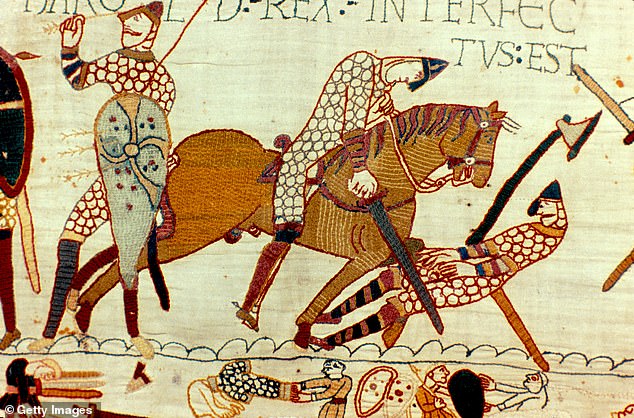 A scene from the Bayeux Tapestry, depicting the death of the leader of the English Confederation (of which Mercia was a member) at the Battle of Hastings. The organisation believe this is the moment the rest of England became a colony of Normandy

How can a country forge independence?

There are three main steps to becoming an internationally-recognised state: declare independence, gain recognition and join the United Nations.

To establish a new country, it must first satisfy the international laws that all free countries generally acknowledge.

A new country must be recognised by existing states within the international community.

Being admitted into the UN goes a long way toward a new country becoming recognised by the international community.

Inspired by his reading, Jeff joined an organisaton called the Movement for Middle England led by a man known only as Woody.

But disgruntled with the lack of members and the unclear ideology of the group, Jeff and Geff Littlejohns left and formed the Mercia Movement in August 19, 1993.

The movement then spent the next four years producing a work entitled The Mercia Manifesto and another four years on a Draft Constitution for Mercia.

They then promoted a Mercian Constitutional Convention in Birmingham between 2001 and 2003 and following deliberation and amendments published The Constitution for Mercia, a 21-page booklet.

Three members of the Convention, Jeff, Joyce Millington and David Bastable, issued the Declaration of Mercian Independence, in Victoria Square, Birmingham, on May 29, 2003.

The Mercian Constitutional Convention renamed itself the Acting Witan of Mercia after the declaration.

A ‘witan’ in Anglo-Saxon times was the gathering of the king’s advisers.

And so Independent Mercia was born.

‘We have 2,500 registered citizens and every single one of them regard the Constitution as the law of the land. 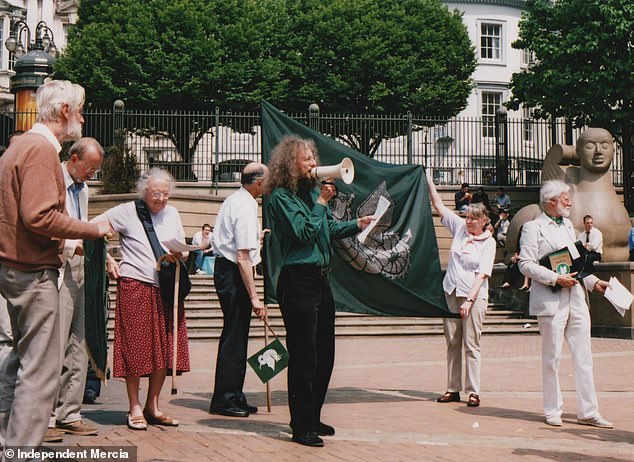 Mercia’s Declaration of Independence at Victoria Square, Birmingham, on May 29, 2003. Pictured: Jeff Kent (middle), David Bastable (second from the left) and Joyce Millington (third from the left) 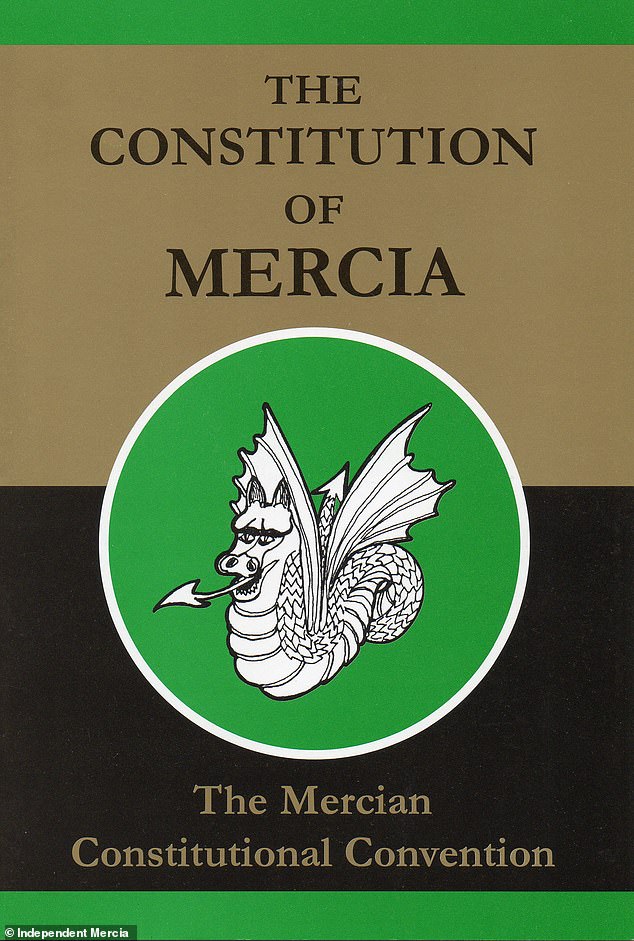 The front cover of the physical Constitution of Mercia document, a 21-page booklet published in 2003

How does the UK currently look?

The UK consists of three countries: England, Scotland, Wales and the province of Northern Ireland.

Most of Ireland seceded from the UK in 1922, leaving the present United Kingdom of Great Britain and Northern Ireland, which formally adopted that name in 1927.

‘In so-called UK law, all of the people are subjects of the Crown. In other words, they are owned by the hereditary monarch who is illegal.

‘I’m not a subject of the Crown and I have resigned from the UK even though I have to cope with certain aspects of it.

‘The United Kingdom is in illegal occupation of not just Mercia, but all of England and Wales. We want our land back,’ Jeff says.

Originally from the town of Hanley, Staffordshire, Jeff does pay his taxes although he argues ‘not by compulsion as I don’t have to pay anything’.

‘If I decide to, I will cease paying tax whatever the consequences. With regards to voting, I have left the UK and don’t vote or recognise the system.’

Independent Mercia is allied with another group named Independent Northumbria and is working on forming an English Confederation. 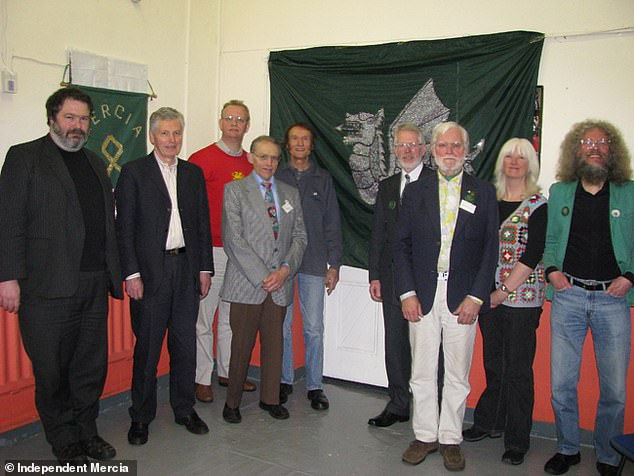 Visions of Mercia Conference: Subheaded The Midlands After Meltdown. This was held in Hanley, Stoke-on-Trent, on March 20, 2010 and the photo shows the event’s speakers, which were from Independent Mercia, Greenpeace, Friends of the Earth and the Optimum Population Trust 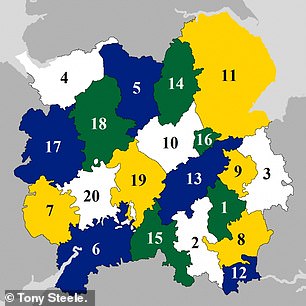 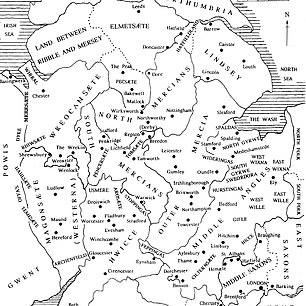 What countries have successfully become independent of the UK?

Several countries have successfully become independent from the United Kingdom including Barbados, India, the United States and Jamaica.

In 1973, there was referendum asking voters in Northern Ireland if they wanted to remain in the United Kingdom or to leave and join with the Republic of Ireland. They voted 98.9 per cent to 1.1 per cent in favour.

The Acting Witan of Mercia is also concerned by climate change and ecological balance is one of its founding principles.

It fundamentally opposes HS2 running through its territory and supports Extinction Rebellion and Insulate Britain.

This is not surprising given that some of its founding members were originally involved with the Green Party.

‘There is no sustainable future on the current UK model. The land cannot support the vast population of the country.

‘Had the Battle of Hastings been won, one might argue that England would be like the more progressive Scandinavian countries today.

‘We want ecological balance to be the bedrock of Independent Mercia. The essence of it is food. People can’t eat computers.

‘If humans don’t get back in synchronization with the planet, then we will be part of the sixth great extinction,’ Jeff explains.

On February 26, 2010, Jeff and the Acting Sheriff of Staffordshire, Philip Snow, made a declaration outside the Potteries Museum and Art Gallery in Stoke-on-Trent claiming the Staffordshire Hoard to be the property of the citizens of Mercia. 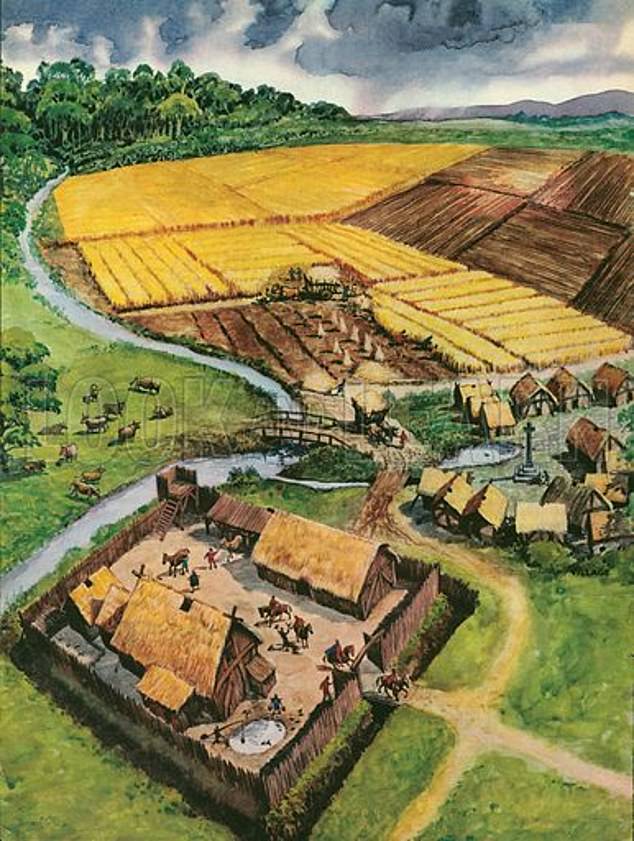 The Acting Witan of Mercia is also concerned by climate change; it fundamentally opposes HS2 running through its territory and supports Extinction Rebellion and Insulate Britain

The ‘war hoard’ collection was discovered by metal detectorist Terry Herbert who was using a £2 metal detector he bought from a car boot sale to explore a field near Lichfield belonging to farmer Fred Johnson.

The haul of 3,900 items is thought to belong to Mercian King Penda, a Pagan leader who ruled until 655AD.

Jeff wrote to the Queen twice to claim that the gold belongs to Mercia and that the British Crown had stolen it. 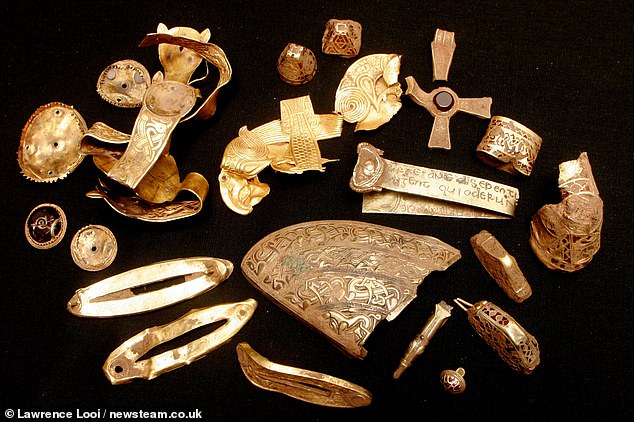 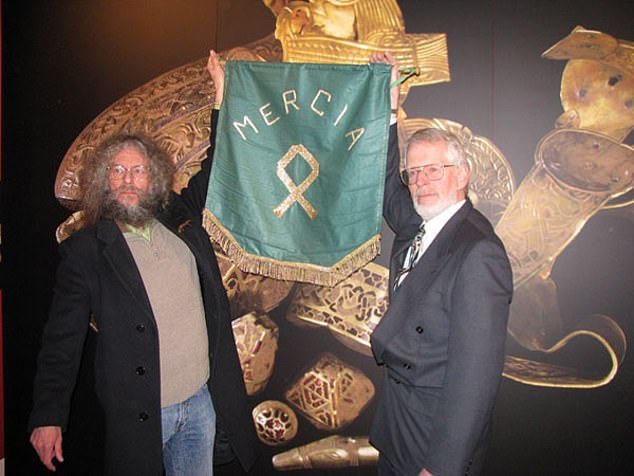 The Acting Witan of Mercia claimed the trove to be in the ownership of the citizens of Mercia. Taken by Sue Bell (current facilitator)

Since then, Jeff has claimed he would be prepared to die for the Acting Witan of Mercia.

‘As the convenor, I am the focal point to the outside world. My name is out there.

‘If we had enough followers, it would be well within the UK’s power to send the SAS, capture me, take me away and stick me in the Tower of London.’

But can Independent Mercia free the Midlands from the oppression of Westminster?

With Brexit and Scottish independence looking more and more likely, Jeff believes the time for Mercia is now. 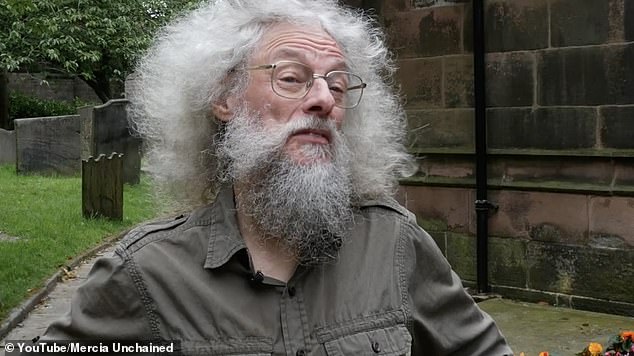 Since then, Jeff has claimed he would be prepared to die for the Acting Witan of Mercia

Long-running tensions between Madrid and Catalonia boiled over in 2017 when the region in north-east Spain held a referendum on independence.

Catalonia, one of Spain’s 17 autonomous regions, has a population of around 7.5 million people and includes the tourist-popular city of Barcelona.

The region has its own language as well as Spanish and generates a fifth of Spain’s 1.1trillion-euro ($1.3trillion) economy, but polls show its voters are divided on the question of independence.

The European Union has said an independent Catalonia would not be allowed to stay in the bloc.

The referendum on October 1, 2017, was organised by Catalan authorities but declared invalid by the central Spanish government, led by Mariano Rajoy. 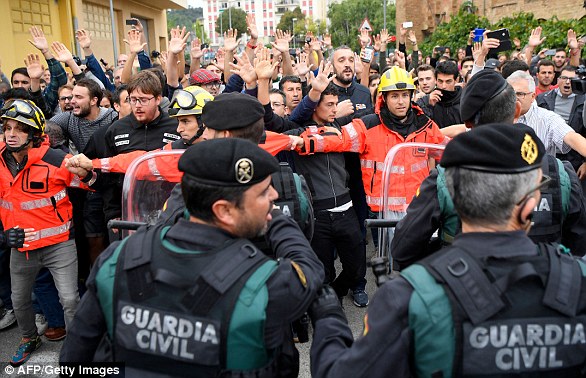 Spanish civil guard officers and firefighters hold back a group of protesters on October 1, 2017, the day of Catalonia’s disputed independence referendum

The pro-independence side won with more than 90 per cent of the vote but turnout was below half and the ballot was considered illegal by the Spanish government.

Spanish national police and Civil Guard officers clashed with voters as they tried to break up balloting.

More than 890 civilians and 430 police were injured when anti-riot squads moved into polling stations and dispersed voters.

But Spanish authorities commended the police, saying their response to the voting was professional and proportionate.

On October 27, 2017, separatist lawmakers declared independence in a session boycotted by opposition parties.

The declaration was not recognised by any UN country and then-Catalan leader Carles Puigdemont fled to Brussels three days later. 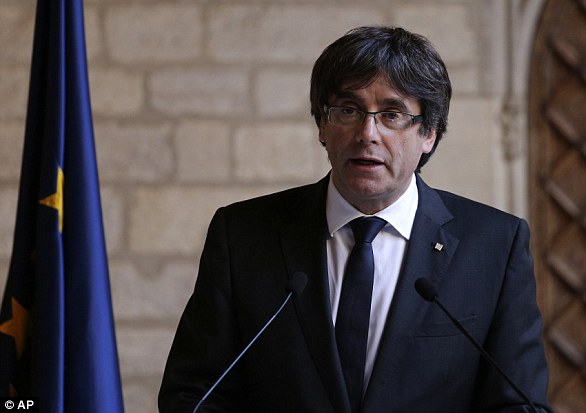 Former Catalan leader Carles Puigdemont, pictured at the height of the independence crisis in October 2017, who fled into exile in Belgium after the declaration

Many Catalan separatist leaders and activists who supported the referendum are either awaiting trial in prison or fled the country.

Direct rule over Catalonia was removed in May 2018 when pro-separatist Quim Torra was chosen as the region’s new leader, replacing Puigdemont.

A month later Rajoy was ousted as Spain’s prime minister and replaced by Pedro Sanchez who had shown more willingness to engage with the Catalan movement.