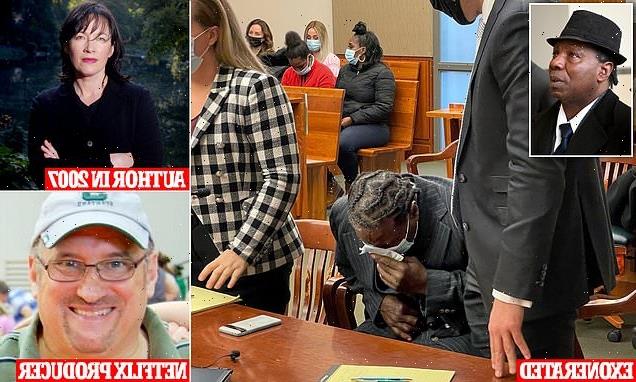 Man, 61, convicted of raping author Alice Sebold in 1981 after she ID’d him in court is exonerated after producer of Netflix movie based on her memoir ‘Lucky’ hired a PI after he doubted the story

A man who spent 16 years in prison for raping award-winning author Alice Sebold had his conviction overturned on Monday – after a team working for Netflix on an adaptation of Sebold’s memoir noticed inconsistencies in the story.

After being exonerated, Broadwater said he ‘hopes and prays’ that Sebold will say, ‘Hey, I made a grave mistake,’ and give me an apology.  I sympathize with her,’ he added. ‘But she was wrong’.

Anthony Broadwater, 61, was found guilty of raping Sebold, now 58, in 1981, while she was a student at Syracuse University.

In court in 1982, Sebold pointed out Broadwater in a line-up, and he ended up behind bars until 1999.

Sebold, author of The Lovely Bones, detailed her attack in her 1999 memoir, Lucky, which sold more than a million copies.

In May 2019, Netflix announced that they were making a film of the memoir, which was to be written and directed by Karen Moncrieff and star Victoria Pedretti as Sebold.

Moncrieff described the book as an ‘unflinching, true story of a fierce rape survivor and her battle to become the person and writer she always intended to be.’

Tim Mucciante, who has a production company called Red Badge Films, had signed on as executive producer of the adaptation but became skeptical of Broadwater’s guilt when the first draft of the script came out, because it differed so much from the book.

‘I started poking around and trying to figure out what really happened here,’ Mucciante told The Associated Press on Tuesday. 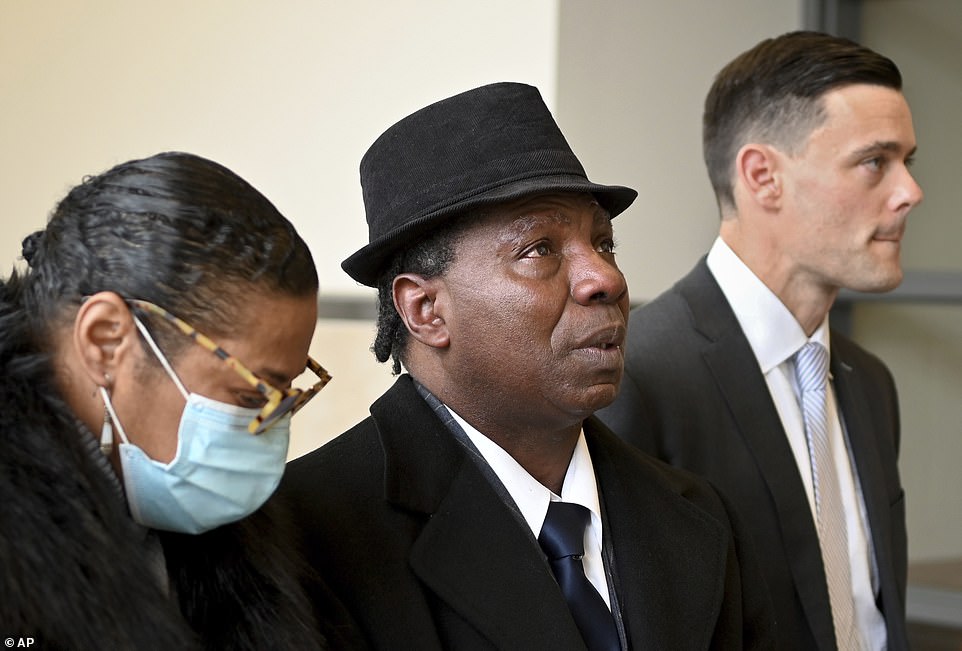 Anthony Broadwater, who spent 16 years in prison, was cleared Monday by a judge of raping author Alice Sebold when she was a student at Syracuse University, an assault she wrote about in her 1999 memoir, ‘Lucky’ 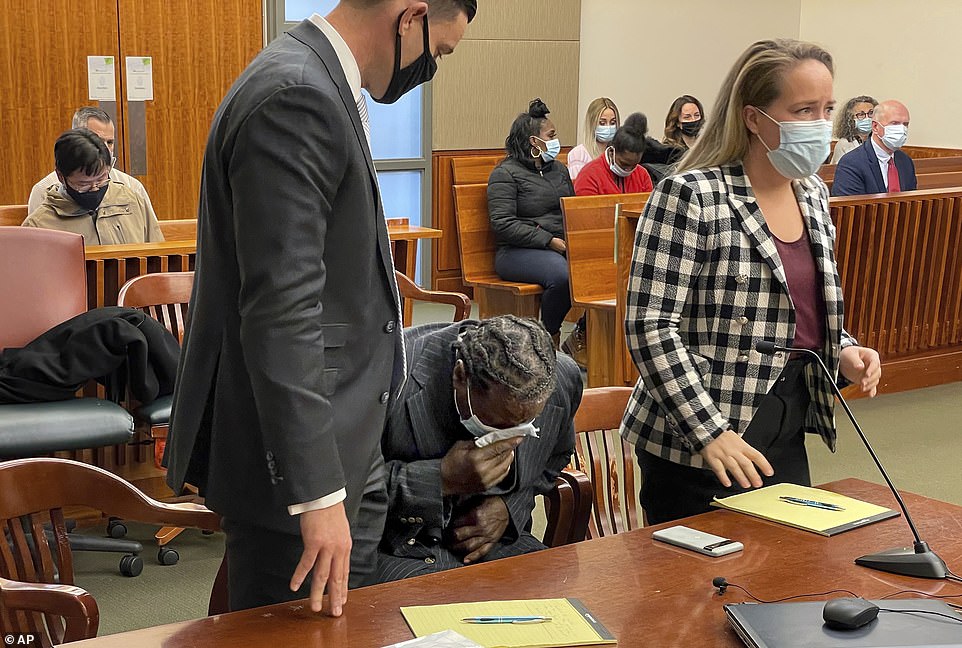 Broadwater, 61, shook with emotion, sobbing as his head fell into his hands, as the judge in Syracuse vacated his conviction at the request of prosecutors 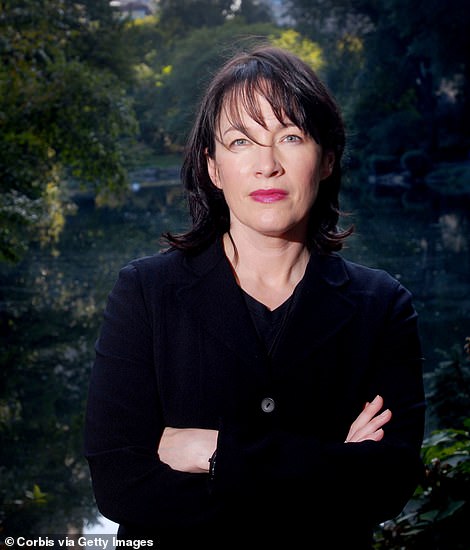 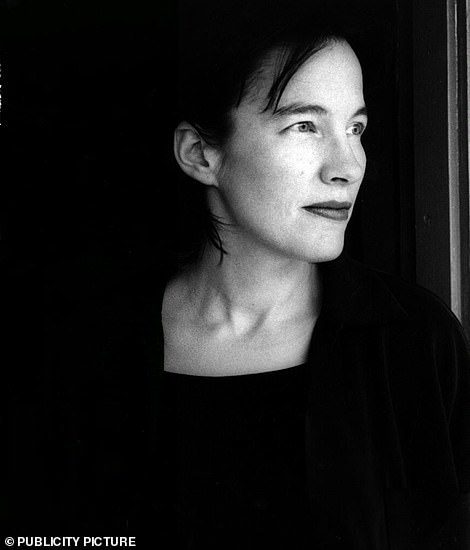 He told The New York Times: ‘I started having some doubts, not about the story that Alice told about her assault, which was tragic, but the second part of her book about the trial, which didn’t hang together.’ 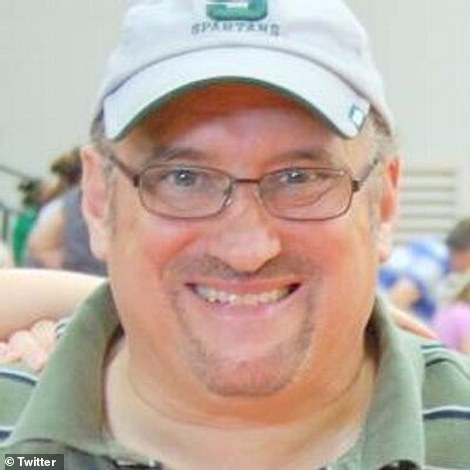 Tim Mucciante, who worked as a producer on the book’s film adaptation, started looking into inconsistencies after seeing that the script differed wildly from Sebold’s source text

Mucciante said that he ended up leaving the production in June because of his skepticism about the case and how it was being portrayed.

After dropping out of the project he hired a private investigator, who put him in touch with David Hammond and Melissa Swartz, of the Syracuse-based firm CDH Law.

The fate of the film adaptation of Lucky was unclear in light of Broadwater’s exoneration.

Messages seeking comment were left with Netflix and with its new executive producer, Jonathan Bronfman of Toronto-based JoBro Productions.

Sebold had no comment on the decision, said a spokesman for Scribner, which published the memoir.

Scribner has no plans to update the text, the spokesman said.

‘I just hope and pray that maybe Ms. Sebold will come forward and say, ‘Hey, I made a grave mistake,’ and give me an apology,’ Broadwater said. ‘I sympathize with her. But she was wrong.’

Broadwater described how his life was destroyed by the false conviction.

He had just returned home to Syracuse in 1981, aged 20, after serving in the Marine Corps in California.

He had gone home because his father was ill, he said.

His father’s health worsened during the trial, and he died shortly after Broadwater was sent to prison.

Sebold spotted him in the street five months after her attack, said he could be her attacker, and he was arrested.

Sebold reported her attack immediately and evidence was collected from a rape kit.

She described her attacker to the police, but the resulting composite sketch did not resemble him.

Sebold did not identify him in a line-up, but later said she was confused.

Sebold said she pointed out a different man as her attacker because ‘the expression in his eyes told me that if we were alone, if there were no wall between us, he would call me by name and then kill me.’

The long-ago trial largely hinged on two crucial pieces of evidence: Sebold’s initial misidentification of the suspect during a police lineup and microscopic hair analysis, later deemed junk science by the federal government.

‘Sprinkle some junk science onto a faulty identification, and it’s the perfect recipe for a wrongful conviction,’ said Hammond, Broadwater’s attorney.

Broadwater was released on New Year’s Eve in 1999. He got married, but said he was a pariah because he remained on the sex offender’s list.

‘On my two hands, I can count the people that allowed me to grace their homes and dinners, and I don’t get past 10,’ he said.

‘That’s very traumatic to me.’ 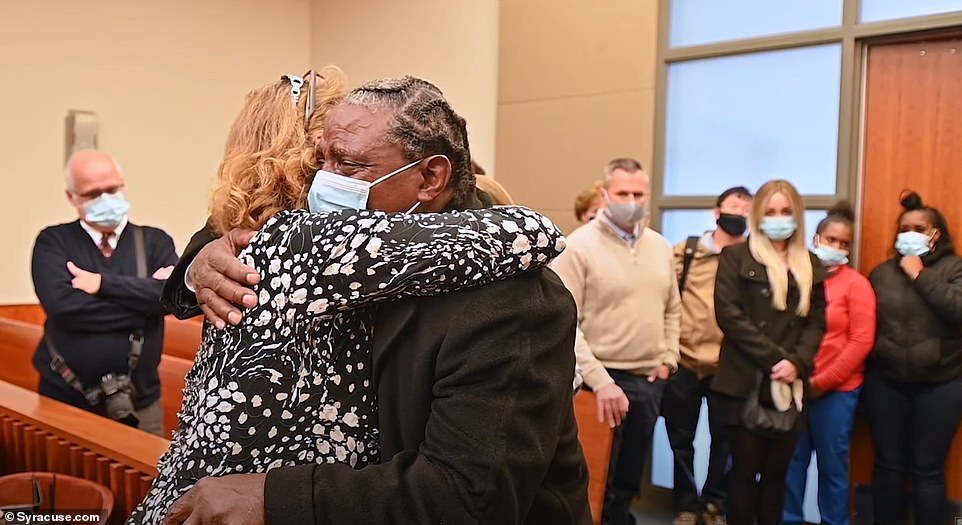 Broadwater, pictured her in court on Monday, said he was still crying tears of joy and relief over his exoneration the next day 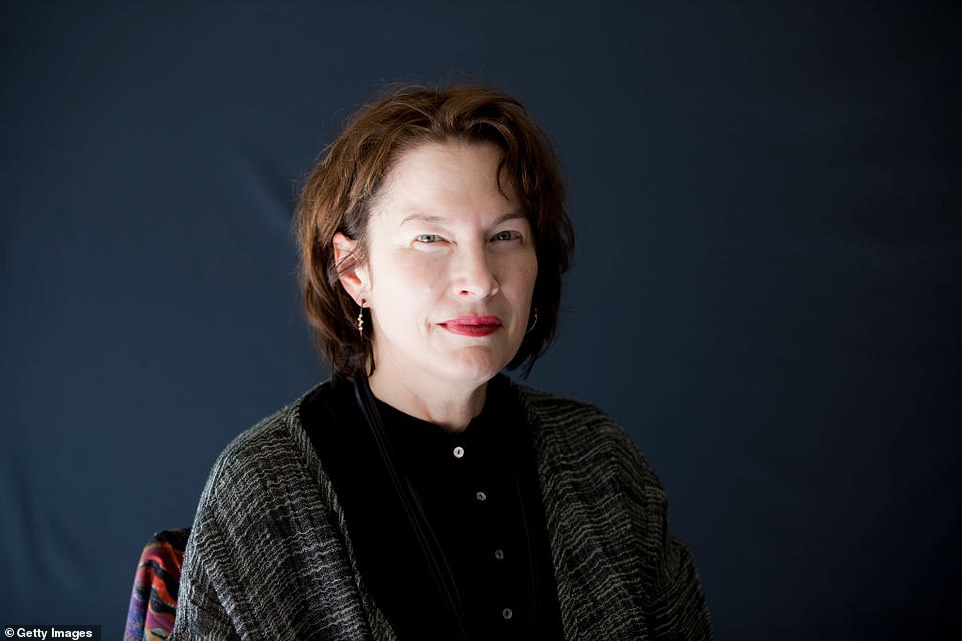 Sebold, pictured in 2018, wrote in Lucky of being raped as a first-year student at Syracuse in May 1981 and then spotting a black man, Broadwater, in the street months later that she was sure was her attacker. During a subsequent police lineup with Broadwater present, Sebold picked out someone else

Broadwater has worked as a trash hauler and a handyman in the years since his release from prison, but his conviction was a constant cloud.

He said he and his wife wanted to have children, but discounted the idea, fearing the shame that would befall their future child.

‘We had a big argument sometimes about kids, and I told her I could never, ever allow kids to come into this world with a stigma on my back,’ he said. 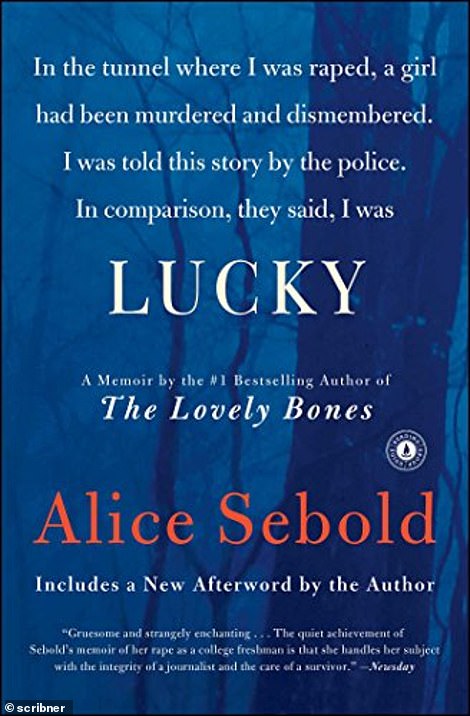 Sebold detailed the assault in her 1999 memoir, Lucky – her first of three books – which was in the process of being adapted as a film for Netflix. The fate of the film adaptation following Broadwater’s exoneration is currently unknown

Broadwater broke down in tears on Monday after being officially exonerated by Supreme Court Justice Water T. Gorman in a Syracuse court.

‘I never, ever, ever thought I would see the day that I would be exonerated,’ Broadwater told The Post-Standard of Syracuse after the emotional hearing.

‘I’m not going to sully this proceeding by saying, ‘I’m sorry.’

‘That doesn’t cut it,’ Fitzpatrick said. ‘This should never have happened.’

Sebold wrote in Lucky of being raped as a first-year student at Syracuse in May 1981 and then spotting a black man in the street months later that she was sure was her attacker.

‘He was smiling as he approached. He recognized me. It was a stroll in the park to him; he had met an acquaintance on the street,’ wrote Sebold, who is white. ‘

She said she didn’t respond.

‘I looked directly at him. Knew his face had been the face over me in the tunnel.’

Sebold went to police, but she didn’t know the man’s name and an initial sweep of the area failed to locate him. 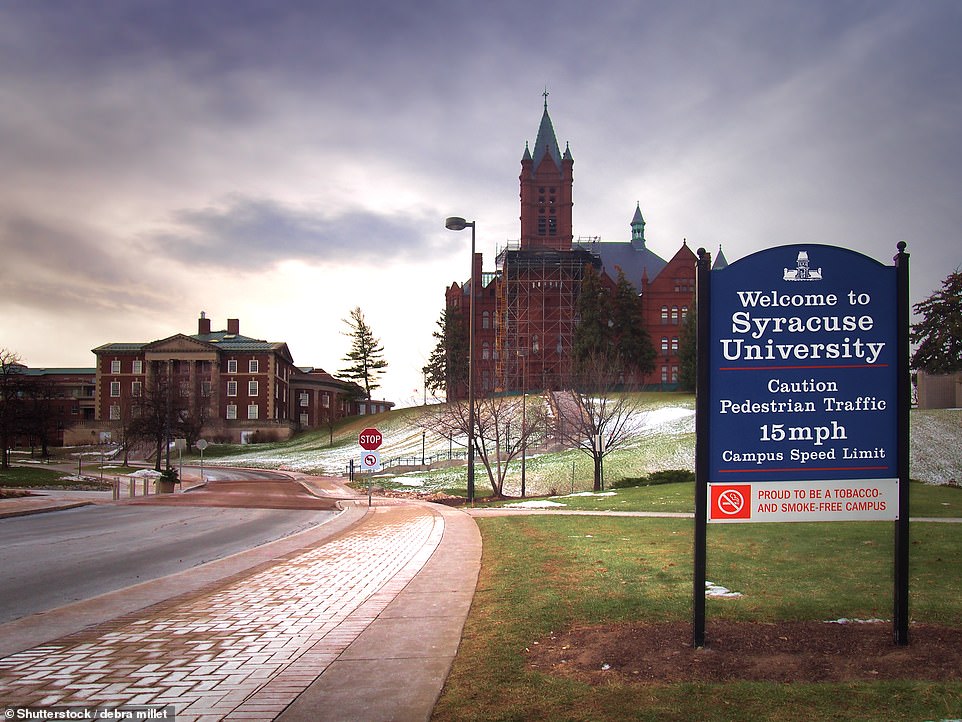 Sebold gave Broadwater the pseudonym Gregory Madison in her book.

Sebold wrote in Lucky that when she was informed that she’d picked someone other than the man she’d previously identified as her rapist, she said the two men looked ‘almost identical.’

She wrote that she realized the defense would be that: ‘A panicked white girl saw a black man on the street.

‘He spoke familiarly to her and in her mind she connected this to her rape. She was accusing the wrong man.’

Messages to Sebold seeking comment were sent through her publisher and her literary agency.

The district attorney apologized to Broadwater privately before the court hearing.

‘When he spoke to me about the wrong that was done to me, I couldn’t help but cry,’ Broadwater said.

‘The relief that a district attorney of that magnitude would side with me in this case, it’s so profound, I don’t know what to say.’

Broadwater said he was still crying tears of joy and relief over his exoneration the next day.

‘I’m so elated, the cold can’t even keep me cold,’ Broadwater said.

In addition to Lucky, Sebold is the author of the novels The Lovely Bones and The Almost Moon.

‘The Lovely Bones,’ about the rape and murder of a teenage girl, won the American Booksellers Association Book of the Year Award for Adult Fiction in 2003 and was made into a movie starring Saoirse Ronan, Susan Sarandon and Stanley Tucci.

Mother-of-three, 27, dies of Covid after constantly 'putting off' jab