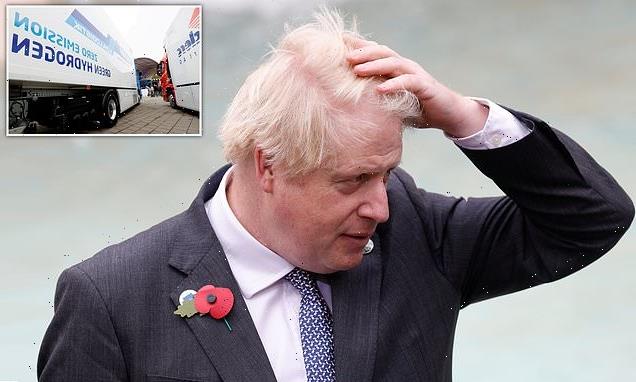 Civil servants could torpedo Boris Johnson’s plans to turn Britain into the ‘Qatar of hydrogen’, it was claimed today.

The Government is exploring how hydrogen gas could be used to power the nation as it moves away from fossil fuels.

But officials in Whitehall are said to be resisting the shift to hydrogen because they have ‘made a bet’ on clean electricity instead.

Civil servants could torpedo Boris Johnson’s plans to turn Britain into the ‘Qatar of hydrogen’, it was claimed today

The Government is exploring how hydrogen gas could be used to power the nation as it moves away from fossil fuels. A hydrogen fuel cell truck is pictured in Luzern, Switzerland in October last year

Hydrogen is being manufactured as a clean alternative to fossil fuels for industry, HGVs and other uses.

It could be put through the UK’s gas pipe network to heat homes with compatible new boilers.

Hydrogen can be manufactured in two ways. So-called ‘green’ hydrogen is made using electricity generated from renewable sources while ‘blue’ hydrogen’ is created using natural gas.

Government sources told The Sunday Telegraph that ministers are having to ‘push back’ against civil servants who are opposing the ‘blue’ hydrogen route.

One source claimed Cabinet Office officials had refused to promote hydrogen as a viable alternative at the COP26 climate change summit in Glasgow because oil and gas giants like BP and Shell are investing in it.

A source close to the Government told the newspaper that civil servants had ‘made a bet several years ago on electricity’ and were resistant to looking at other forms of clean energy.

The source said: ‘Much of what the civil service is doing now is reinforcing the decision that they made years ago at the expense of hydrogen. But it is the wrong horse.’

The newspaper said there is no mention of hydrogen in a 22-page document setting out the Government’s COP26 events.

Mr Johnson said in an address to business leaders earlier this month that he wants the UK to become the ‘Qatar of hydrogen’.

Craig Mackinlay, the leader of the Net Zero Scrutiny Group of Tory MPs, said: ‘I would have thought hydrogen would have been more of a cornerstone of the COP26 offer than it is. It seems to have been entirely sidelined.’

A source in the Department for Business, Energy and Industrial Strategy said the Government is committed to pursuing hydrogen as part of the UK’s clean energy plans.