Christine Keeler’s son is continuing the legal battle to have his mother’s name pardoned of perjury, appointing a QC with expertise in gendered issues.

The sixties icon and model was thrust into the world’s spotlight aged only 19 after her scandalous affair with MP John Profumo rocked British politics when it came to light in March 1963.

In December of the same year she was sentenced to nine months in prison for perjury – the crime of lying under oath in court – following the trial of her former boyfriend Lucky Gordon in which she was found to have obstructed justice.

Now Seymour Platt, 49, Keeler’s son by her brief marriage to businessman Anthony Platt in the early Seventies, has appointed Felicity Gerry QC in the fight to clear Keeler’s name. 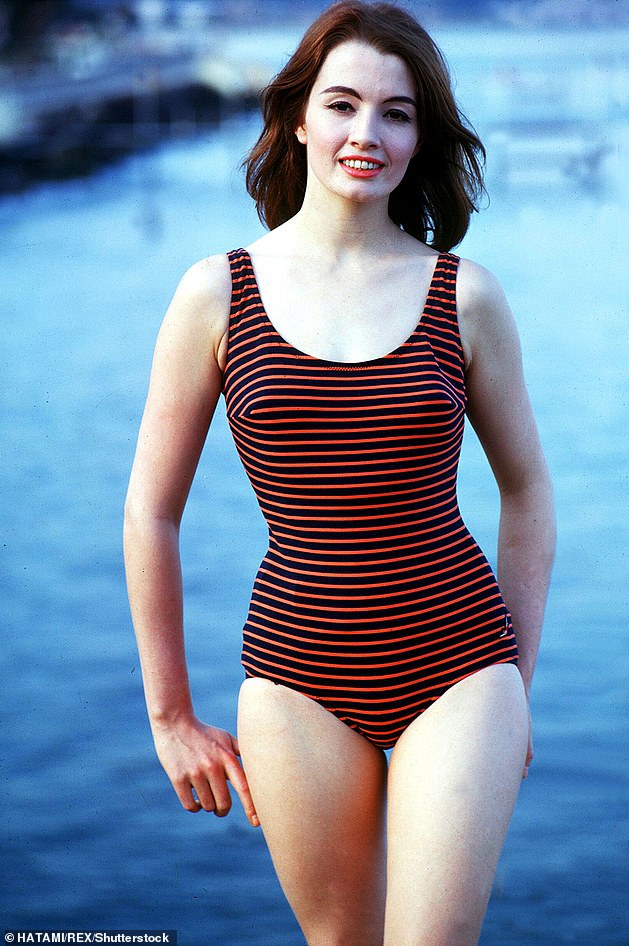 Christine Keeler, who died aged 75 three years ago, found herself thrust  into the spotlight in 1963 when her scandalous affair with MP John Profumo came to light

When the former showgirl died in 2017 aged 75, she pleaded with Platt, the middle child of her three offspring, to ‘do what he can to make sure that the truth is told’.

He believes that his mother was subject to discrimination due to being a woman under the scrutiny of the public eye following the Profumo Affair and that she wouldn’t have been jailed for the same offences now.

Ms Gerry will put the case for Keeler to receive a posthumous pardon from the Queen to the lord chancellor.

The QC told The Times that Keeler’s conviction for perjury had been ‘odd’ due to the fact she had been ‘subjected to a violent assault and lied about who was present, not about being assaulted’. 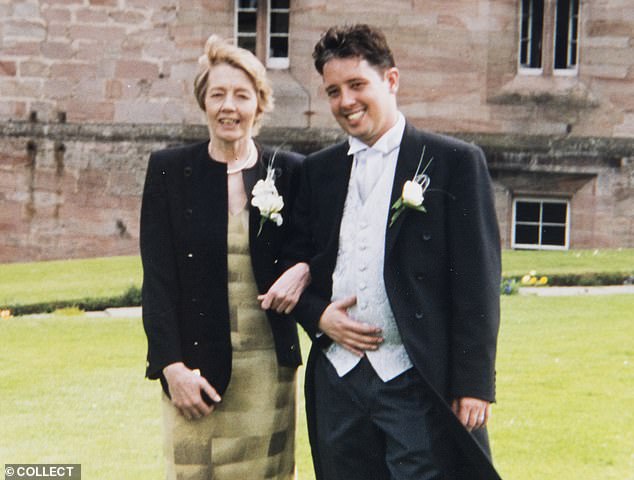 Seymour Platt, 49, (right), Keeler’s son by her brief marriage to businessman Anthony Platt in the early Seventies, pictured with his mother on his wedding day in 2002

She told the publication that modern prosecutors are more considerate of women who are victims of violence and said that a conviction for ‘perjury requires proof of a material lie’. 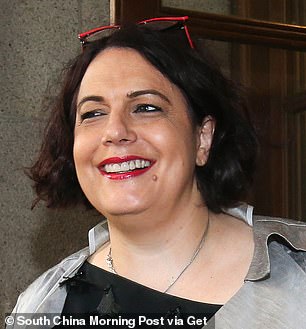 Felicity Gerry QC, who has an expertise in gendered legal issues

Transcripts taken by The Times’ court reporters at the 1963 trial are being scanned for supporting evidence.

Keeler’s affair with John Profumo in 1961 sparked one of the biggest scandals in 20th century political history.

Not only was Profumo married and 27 years older than Keeler, then 19, but she was also enjoying a dalliance with Yev-geny Ivanov, a Russian naval attaché, at the same time.

When this was revealed two years later 1963, MI5 feared Profumo might have inadvertently passed on military secrets to the Russians via Christine.

Profumo initially denied the affair in a statement to the House of Commons, and when he finally admitted it he was forced to resign.

Attention then turned to the activities of Christine, her showgirl friend Mandy Rice-Davies, and their mentor Stephen Ward, the society osteopath through whom Christine met both Profumo and Ivanov. Ward was arrested and charged with living off immoral earnings with his trial heard at the Old Bailey in 1963.

The same year, Profumo resigned his Cabinet post after admitting lying to the House of Commons about the nature of his relationship with Keeler; months later, on the last day of his trial, Ward was found dead at his London home having taken an overdose of sleeping pills.

A jucidial enquiry written by Lord Denning on the case was due to be opened in the Nineties but then British Prime Minister John Major vetoed its release. It will now be made public in 2048. 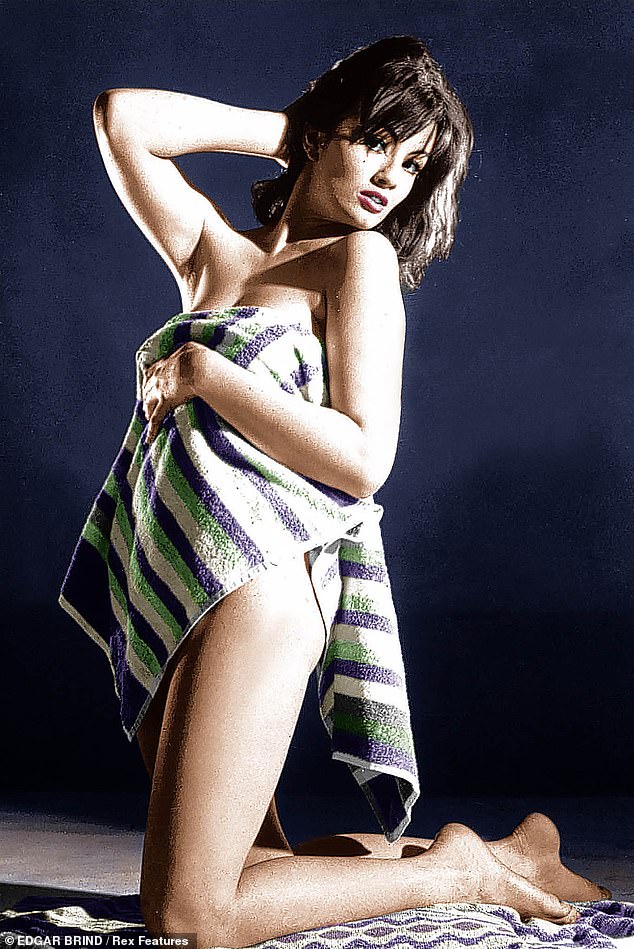 Christine Keeler’s son Seymour Platt, one of the late showgirl’s three children, told podcaster Catherine Mahoney that he plans to launch a legal ‘petition of mercy’ claim to pardon her name for the perjury conviction she received in December 1963 following the Profumo Affair

The campaign for Keeler’s posthumous pardon will centre around the argument she was exhausted after being part of the trial of Stephen Ward.

It is hoped Keeler’s case could follow the precedent set by the Queen’s posthumous pardon of wartime codebreaker Alan Turing in 2013, who was convicted in the 1950s for homosexual activity.

In an interview on journalist Catherine Mahoney’s So I Quit My Day Job podcast earlier this month Platt, who’s lived in Ireland for the last 15 years, spoke about his mother’s alleged affairs following her release from prison, with huge stars of the time including Beatle Ringo Starr, Warren Beatty and George Peppard. 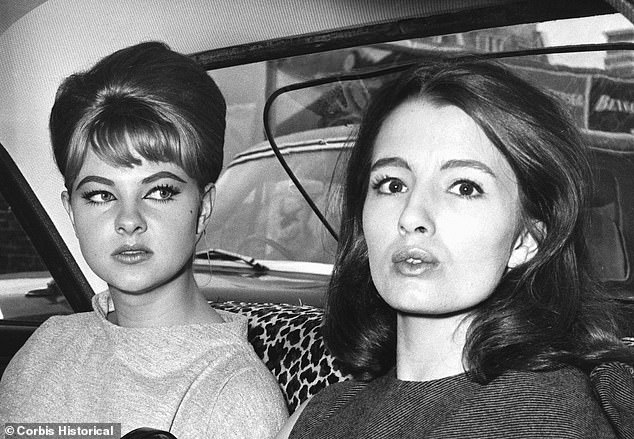 Keeler with her friend Mandy Rice-Davies; the pair became embroiled in one of the biggest political scandals British politics has ever seen in 1961 when they partied with London osteopath Stephen Ward and his high society friends – including John Profumo 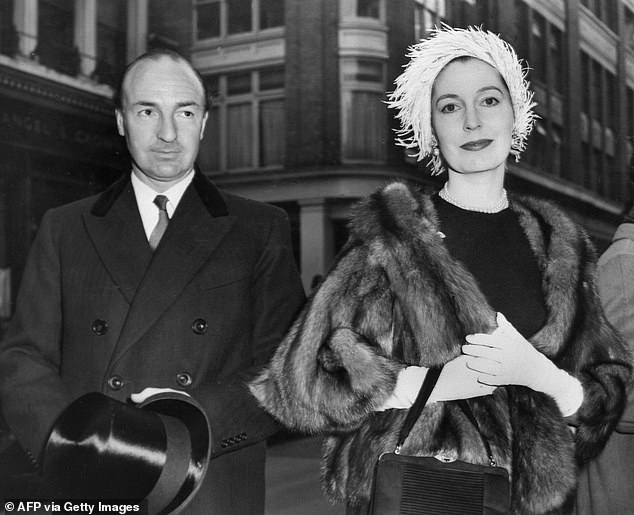 In 1963, Profumo, who had designs on becoming PM, resigned his Cabinet post after admitting lying to the House of Commons about the nature of his relationship with Keeler (British War State Secretary John Profumo and his wife Valerie Hobson in 1961) 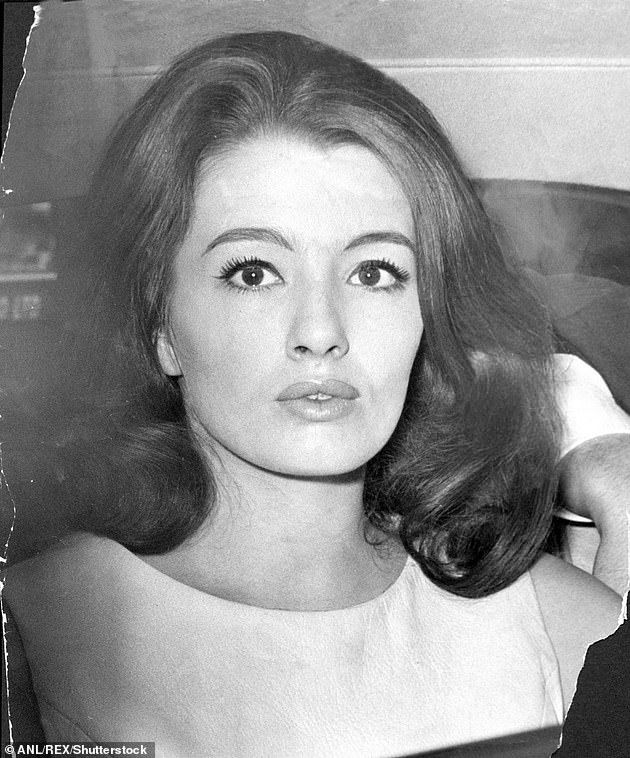 Platt also revealed some of the men his mother became involved with after she was afforded instant fame by the scandal, including Ringo Starr, Warren Beatty and George Peppard

He told Mahoney: ‘I think I’ve got something now that is strong enough that we’re building a pardon for Christine – a petition of mercy.

‘We’ve got a number of points as to why we believe she should never have gone to prison. And today, she wouldn’t have been found guilty.’

While Keeler’s son warned the process would be long and complicated, he said he was confident the family had a strong case. 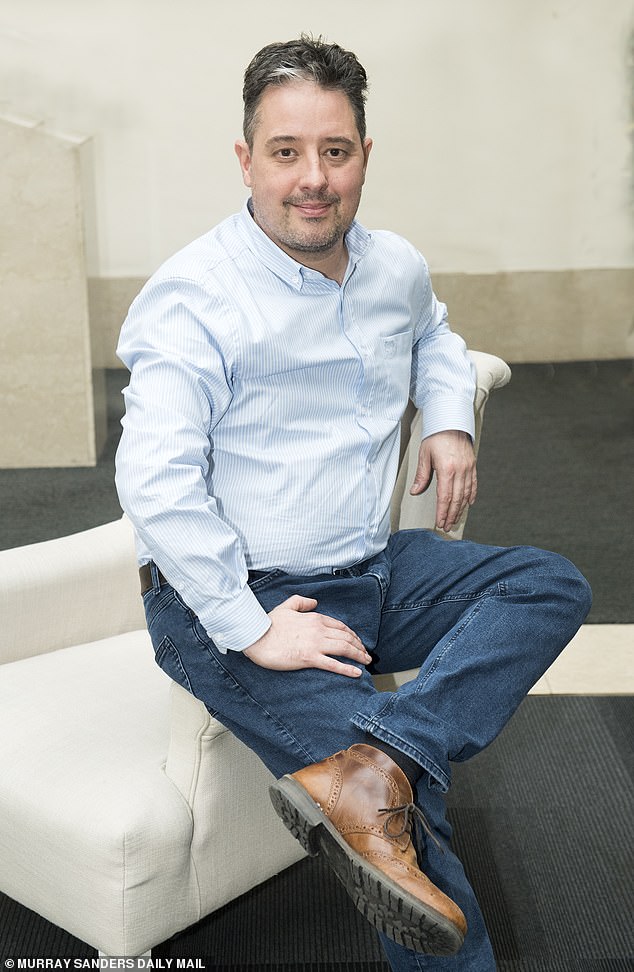 Seymour said that the years that followed her imprisonment saw her party – and play – with some of the world’s biggest stars including a Beatle.

He explains: ‘She actually left prison and morphed into a lot of money because she’d sold all of her stories in newspapers for unbelievable amounts, so she was very, very wealthy.

‘She went to the right parties and she met all the right people and she had affairs with everybody you can imagine from the time… from Warren Beatty to George Peppard and Ringo Starr. Nobody knows she had a short affair with Ringo Starr.’ 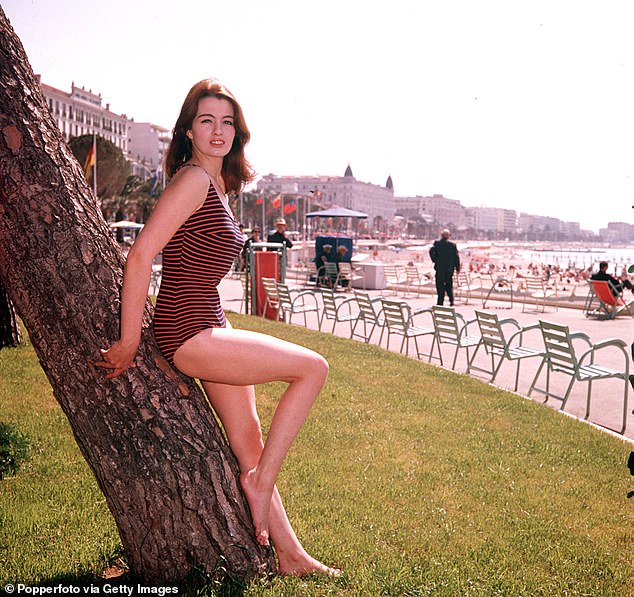 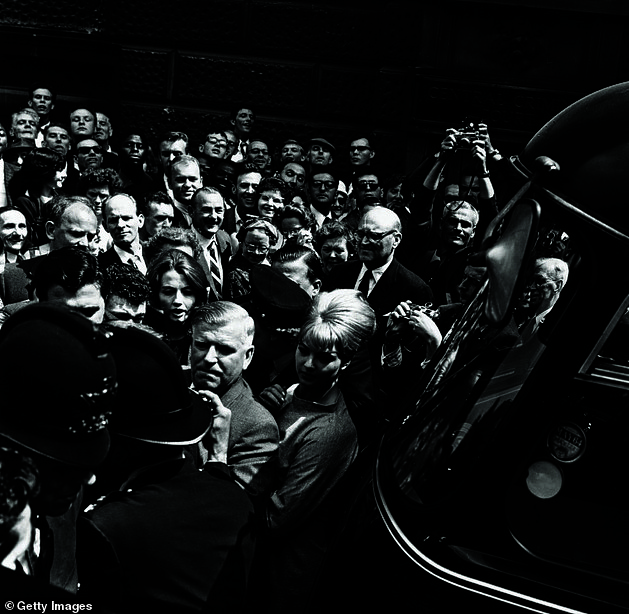 A jucidial enquiry written by Lord Denning was due to be opened in the 90s but then British Prime Minister John Major. It will now be made public in 2048

TIMELINE OF A SCANDAL: HOW THE PROFUMO AFFAIR ROCKED BRITISH POLITICS

The Profumo affair had it all – sex, lies and espionage. It broke at the height of the Cold War, when spying was rife and the threat of war was imminent with the outbreak of the Cuban Missile Crisis. Here’s how it unfolded:

April 1960: At the height of the Cold War, Christine Keeler, having left her home in Wraysbury, Berks, heads for London and begins working at Murray’s Cabaret Club in Soho. It is there that she meets Dr Stephen Ward, a London osteopath. Within weeks she had moved into his Bayswater flat. She soon meets Mandy Rice-Davies at Murray’s and the pair become party companions. 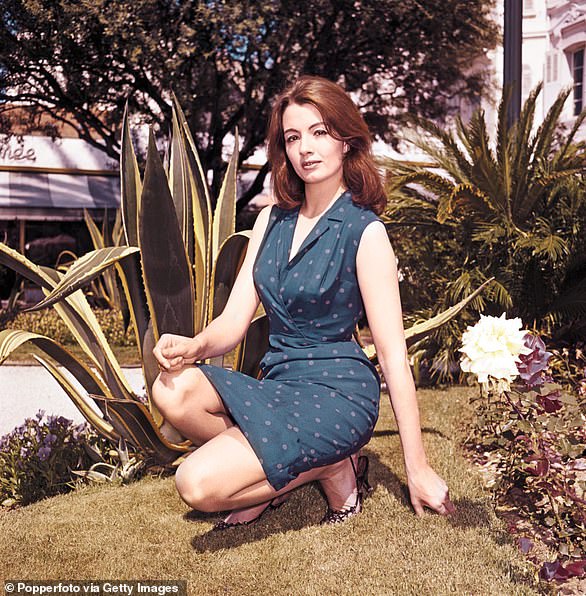 Christine Keeler in Cannes, France in May 1963; her affair with Profumo lasted just a few weeks but transformed her whole life

July 1961: Ward introduces 19-year-old Keeler to Secretary of State for War, John Profumo, while at a party thrown by Lord and Lady Astor at their stately home in Cliveden at Taplow, Bucks. Keeler and Profumo embark on an affair lasting only a few weeks. At the same time, she becomes involved in an affair with Commander Eugene Ivanov, a Soviet naval attaché at the Russian Embassy in London.

March 1963: After months of speculation among MPs, Profumo is forced to face the Commons, where he says: ‘There was no impropriety whatever in my acquaintance with Miss Keeler and I have made the statement because of what was said yesterday in the House by three honourable members whose remarks were protected by privilege.’

June 1963: Ward is arrested in Watford and taken to Marylebone Police Station where he is charged with living off immoral earnings. His trial soon begins at the Old Bailey.

June 5, 1963: Profumo resigns his Cabinet post after admitting lying to the House of Commons about the nature of his relationship with Keeler. 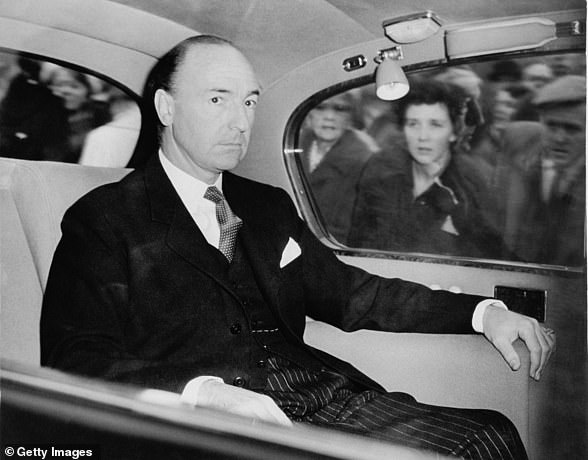 A career in tatters: Profumo was forced to admit he lied about his affair with the then 19-year-old showgirl 27 years his junior

August 1963: On the last day of his trial, Ward is found dead at his London home having taken an overdose of sleeping pills.

December 1963: Keeler is found guilty of perjury in the trial of her former boyfriend Lucky Gordon and imprisoned for nine months.