Beijing: China has formally arrested two Canadian citizens it is believed to be holding to pressure Canada into releasing a Chinese telecoms executive, bringing the two men closer to trial on vaguely defined state security charges. 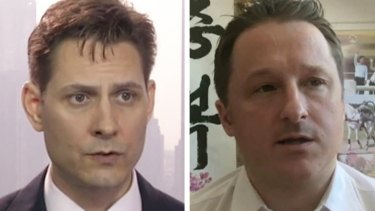 "We always act in accordance with the law, and we hope that Canada will not make irresponsible remarks on China's legal construction and judicial handling," Lu said at a regularly scheduled news conference.

Lu gave no other details. Kovrig is a former Canadian diplomat and expert at the International Crisis Group, and Spavor is a businessman with lengthy experience in North Korea.

China had earlier accused the two of conspiring together to steal Chinese state secrets. 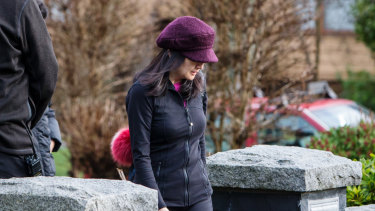 Meng Wanzhou, chief financial officer of Huawei Technologies, leaves her home while out on bail in Vancouver, British Columbia, Canada.Credit:Bloomberg

Canada condemned the "arbitrary action taken by the Chinese."

"In the case of the two Michaels they should be released. We believe that very strongly. There is no evidence that has been produced that would indicate any validity to the allegations made against them."

Both were detained on December 10 after Meng Wanzhou, a senior executive with telecoms giant Huawei, was arrested in Vancouver, Canada, on December 1 at the request of US authorities who want her extradited to face fraud charges.

Meng, the daughter of Huawei's founder, is accused of lying to banks about the company's dealings with Iran in violation of US trade sanctions. Her attorney has argued that comments by US President Donald Trump suggest the case against her is politically motivated.

Meng is free on bail and a judge this month granted her request to move into a larger Vancouver multimillion-dollar home that recently underwent renovation.

The judge also ruled that she will hear arguments on evidence disclosure in late September and October. A decision on whether Meng is extradited to the US could take years.

Kovrig and Spavor are being held in detention facilities and have yet to be granted access to lawyers.

The US has pressured other countries to limit their use of Huawei's technology, warning they could be opening themselves up to surveillance and theft of information.

China and the US are currently embroiled in a trade dispute that has beleaguered global financial markets. Many of the US complaints revolve around China's drive to acquire advanced intellectual property and dominate fields such as latest-generation 5G mobile phone technology that Huawei has pursued.

Another Canadian held in China, Robert Schellenberg, was re-sentenced to death in a drug case following Meng's detention. His case is currently under appeal.