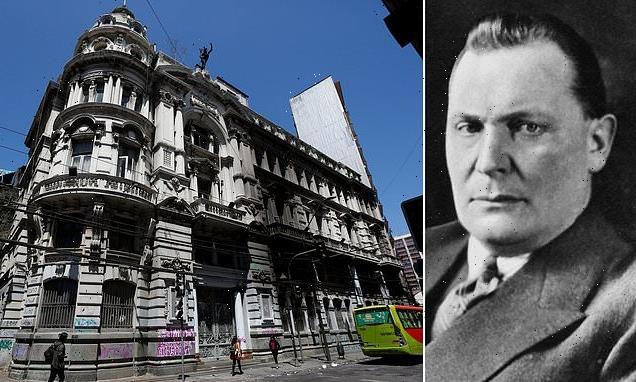 The main conservative newspaper in Chile has been accused of celebrating the life of Nazi high brass Hermann Göring.

El Mercurio published a full-page illustrated article on Sunday, which detailed the life of the German war criminal.

The page, which was found in the society section of the paper, marked the 75th anniversary of Göring’s death.

However, the article quickly came under fire from Chile’s Jewish community which branded it an ‘apology for Nazism’. 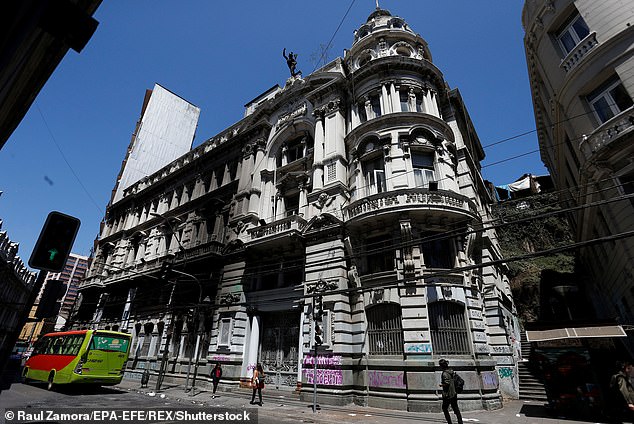 El Mercurio published a full-page illustrated article on Sunday, which detailed the life of the German war criminal. Pictured: The El Mercurio newspaper building in Valparaiso, Chile, in 2019

Additionally, the German embassy in Chile took to Twitter to issue a frank response to the article.

Across two Tweets, the embassy said: ‘It is not customary for the Embassy to publicly comment on newspaper articles. We just want to make it very clear: This character, H. Goering, committed crimes against humanity and was one of the pillars of the Nazi regime.

‘That leaves not the slightest room to justify or minimize morally and politically – and much less in legal terms – its nefarious role during the Nazi regime and in the Holocaust.’

After receiving a letter describing the piece as a ‘direct affront’ to Holocaust victims, El Mercurio yesterday said it ‘deeply regretted’ that the article on Göring had been interpreted in that way. 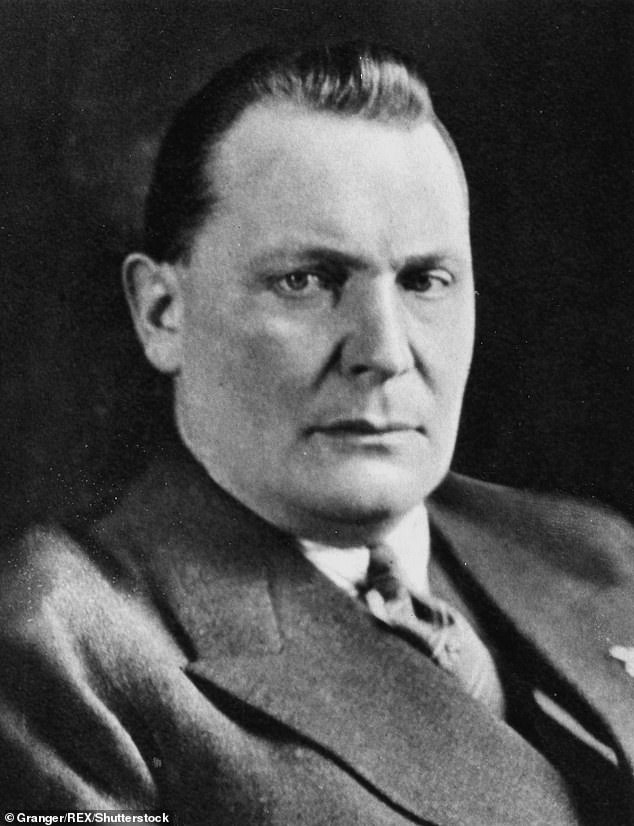 The page, which was found in the society section of the paper, marked the 75th anniversary of the death of Göring (pictured) 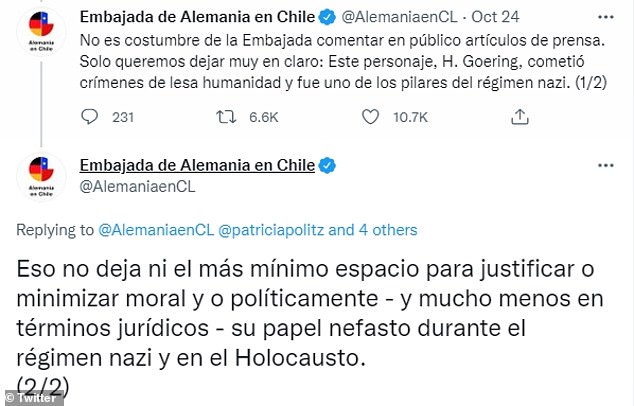 Speaking to the Guardian, Mónica Maureira, a professor at Diego Portales University’s journalism faculty in Santiago, said: ‘El Mercurio has a long history of representing the interests of a select, conservative sector of Chilean society and has pushed their narrative in Chile for generations.’

Hermann Göring was one of the most influential members of the Nazi party, having established the Gestapo secret police, as well as being named as the most senior officer in the German army following the fall of Paris in 1940.

Towards the end of the Second World War, he was banished from the party by Hitler, after asking to assume overall leadership of Germany, believing the Red Army to be close to securing Berlin.

Hitler viewed the request as an act of treason and had him arrested, before he was later tried at the Nuremberg Trials.

He was found guilty and sentenced to death for his war crimes, but before his execution, he swallowed a cyanide capsule to kill himself.

Who was Hermann Göring?

The son of a judge, Hermann Göring was born in Germany in 1893.

He fought in the air force during World War One and at the end of the conflict was recognised as a hero – even being awarded the Pour le Mérite, which was only awarded for extraordinary personal achievement.

Göring became a leading figure in the Nazi party and was awarded a high position in Hitler’s Government after he became Chancellor in 1933.

He went on to play a key role in establishing the Gestapo and created early concentration camps for political opponents of Hitler.

In 1935 he became commander in chief of the Luftwaffe and held the post until the final days of the war.

And in 1940, after the fall of Paris, he was bestowed the specially created rank of Reichsmarschall, which gave him superiority over every other German officer.

After learning that Hitler intended to commit suicide in 1945 he sent Hitler a telegram asking if he could assume control after his death.

Seen as an act of treason, Hitler had Göring removed from his position, expelled from the Nazi party and arrested.

Göring was indicted by the International Military Tribunal in Nuremberg in 1946, and was the second-highest ranking official to be trialled.

Goering was found guilty of war crimes and sentenced to death by hanging.

Ahead of his execution he took cyanide and died.

An Unusual Year is About to End on a High for Asia Broadband, Inc.