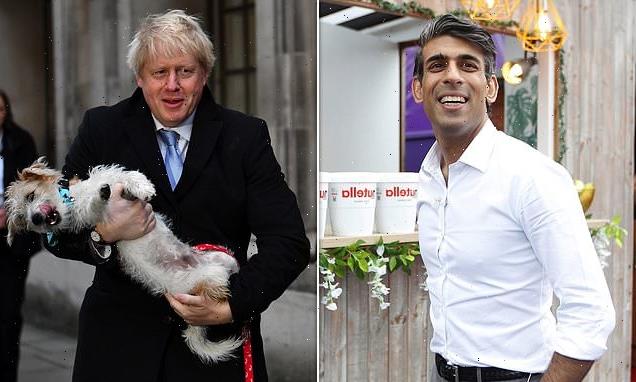 Chancellor has got a new dog to rival Boris Johnson's Dilyn

Rishi Sunak bares his teeth: Chancellor has got a new dog to rival Boris Johnson’s Dilyn – and a newly assertive attitude to the PM’s spending plans

Most Prime Ministers are not being paranoid when they worry about the Treasury – their Chancellors really are out to get them.

Even if they genuinely don’t covet the top job – in the broody, obsessive manner of Gordon Brown – few can resist the temptation to fight guerrilla battles with No 10.

After nearly 18 months in the job, Rishi Sunak is unmistakably doing the latter – even if he denies wanting to succeed Boris Johnson.

‘He is clearly much less worried these days about challenging Boris, and very pointedly talks about the need to make the ‘right’ decision rather than chase short-term headlines’. 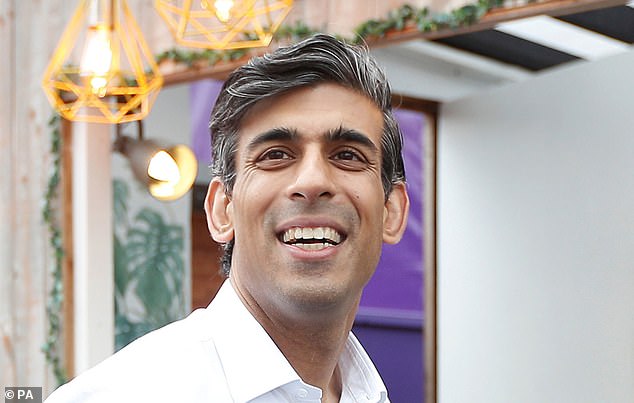 Even if they genuinely don’t covet the top job – in the broody, obsessive manner of Gordon Brown – few can resist the temptation to fight guerrilla battles with No 10. After nearly 18 months in the job, Rishi Sunak is unmistakably doing the latter – even if he denies wanting to succeed Boris Johnson

In recent weeks Sunak has clashed with Johnson over the costs of his policies on social care, climate change and pensions, rebuked the PM over the UK’s chaotic foreign travel rules and was accused of a power-play by holding a meeting at No 11 with Lynton Crosby, the ‘Wizard of Oz’ election strategist whose number-crunching skills were critical to Johnson’s political rise.

His manoeuvres have coincided with internal party polling which puts Sunak way ahead of his Cabinet rivals as the favourite to succeed Johnson, just as the Prime Minister’s approval ratings have dropped sharply.

The ‘optics’ – as Whitehall watchers like to phrase it – are of ambition and ‘branding’; perhaps most suspiciously of all, he has just taken delivery of Nova, a labrador retriever puppy in what could be seen as an attempt to out-cute Dilyn, the leg-humping Jack Russell cross owned by Johnson and his wife, Carrie.

A Sunak ally says that is unfair: ‘It was not Rishi’s idea. The children had been pestering him for ages for a dog and he had resisted, saying he had enough to worry about as it was. Now of course he is infatuated.’

Nova and Dilyn met for the first time last week in the Downing Street garden and ‘got on famously’, the ally added.

Until recently, Sunak had adopted a posture of conspicuous loyalty to the Prime Minister, doling out billions of pounds to prop up the economy during the Covid crisis while letting it be known that he was a ‘hawk’ in favour of easing restrictions as quickly as possible.

But as the Chancellor has started to grapple with the near half-trillion-pound hangover of the crisis – the ‘economic long Covid’ – he has become increasingly vocal about the need for fiscal restraint in the face of the Prime Minister’s populist spending promises, such as the new, unloved £250 million Royal yacht. 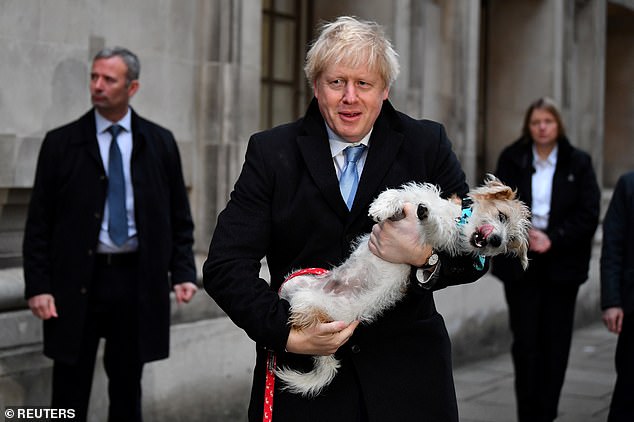 The PM is pictured with Dilyn on polling day in the 2019 election. Nova and Dilyn met for the first time last week in the Downing Street garden and ‘got on famously’, the ally said

The Chancellor’s aides bridle at descriptions of ‘ambitious’ Rishi plotting his way to No 10, insisting that he and the Prime Minister are in ‘lockstep’.

But last week’s leak to the media of a letter written by Sunak to Johnson objecting to the travel rules have soured relations.

Although the Treasury is blaming Grant Shapps’s Transport Department for putting it in the public domain, the letter was regarded in Downing Street as ‘a failure of political judgment’ by the Treasury.

A Tory MP ally said: ‘The Prime Minister shared Rishi’s views. It didn’t need to be written. It was designed to be leaked. Boris regarded it as a failure of political judgment.

‘He hadn’t even received the letter – and said that maybe Rishi ‘could do a very good job’ at Health instead of the Treasury.’

No one can question Sunak’s work ethic: the 41-year-old teetotaller, who has two young girls with wife Akshata Murthy, the daughter of Indian billionaire and co-founder of technology company Infosys, N. R. Narayana Murthy, rises at 6am to start a 13-hour day.

After a session on his Peloton exercise bike – usually led by New York-based instructor Cody Rigsby to the soundtrack of Britney Spears – he has a modest breakfast of Greek yogurt and blueberries.

Sunak will fast intermittently to maintain his svelte frame, with friends saying his only vice is a habit of ‘bingeing on fairy cakes’ when hungry.

But the Prime Minister is in super-healthy mode, too, having vowed to shun alcohol until Christmas to be at the top of his game for what he knows are the formidable challenges that lie ahead this autumn.

If Sunak did win the top job he would become the fourth Conservative prime minister in a row – something which has never happened in modern times.

But with Johnson expected to lead the party into the next election in three years, Sunak risks losing his patina of political freshness by the time he finally gets the chance to take a tilt. To try to bend these rules of political gravity, pro-Brexit Sunak has established a formidable Commons operation to love-bomb the Red Wall MPs in the Midlands and the North who won Labour seats for the first time at the last election – and hold the key to the continuation of Tory rule.

One Red Waller has privately boasted he has held four meetings in almost as many months with Sunak and his officials to discuss area-specific issues such as the return of the coal miners’ pension scheme. Another of the MPs said that when they asked Sunak’s office for a picture to run on a leaflet they had responded within an hour – while no other Cabinet Minister bothered.

Career-minded MPs who have fallen out of favour with No 10 have started to cluster around Sunak – particularly select committee chairs such as Huw Merriman, head of the Transport Committee, who are determined to win jobs in a Sunak administration. They, in turn, are being monitored by party whips who feed information about their activities, political and otherwise, back to Downing Street.

Despite Sunak’s wider popularity in the party, one Government source said he was regarded as something of a loner: ‘He is actually quite isolated in the Cabinet, I can’t think of another Minister he is close to. MPs and even Ministers complain that he doesn’t respond to their texts or WhatsApps.’ The source added that, while ‘it sounds ridiculously old school’, the fact that Sunak is teetotal ‘doesn’t help that process’.

However, his allies say that Sunak – who avoids alcohol because he ‘doesn’t like the taste’ – is always ‘the first into the pub’ in his Yorkshire constituency of Richmond ‘buying all the drinks’.

Others accuse him of letting problems pile up in the department, saying ‘he is so busy worrying about his profile that he has forgotten to do the day job’.

One Tory insider who has watched Sunak at close quarters claims he is ‘overly preoccupied’ with his public image. The insider said: ‘When he does events, public functions etc, he’s very interested in how the photos are going to look. All politicians are to an extent but Rishi more than most.’

The Chancellor won his job when he was still in his 30s, with only a junior ministerial position under his belt. He was parachuted into the Treasury after Sajid Javid fell victim to a brutal assassination by Dominic Cummings, the PM’s then all-powerful consigliere.

To Sunak’s discomfort, Cummings has been praising the Chancellor during a series of outspoken attacks on Johnson, claiming Sunak shared his concerns about Johnson’s handling of the pandemic. Cummings also praised Sunak’s handling of the economy during the crisis, which the former adviser’s critics described as ‘a parasite looking for a new host’. Sunak’s friends say the love from Cummings is unrequited.

As The Mail on Sunday has chronicled in recent weeks, Sunak has made increasingly determined interventions over Johnson’s spending plans, including the spiralling bill for No 10’s proposed climate change policies to hit the target of ‘net zero’ emissions by 2050. Johnson wants to show the world that he is a leader in Green reforms before the Cop26 climate change conference in Glasgow in November.

In what laconic Treasury officials describe as ‘death by Cop’, estimates of the cost of decarbonising the economy by the middle of the century have hit £1.2 trillion – and are still as high as £400 billion after energy savings are factored in.

Sunak is not only concerned about the cost to taxpayers: his Red Wall friends have told him the word ‘green’ jars with voters in their constituencies, many of whom regard the policies as luxuries which can only be indulged in affluent areas.

Sunak also felt he was being ‘bounced’ by Johnson and new Health Secretary Sajid Javid into stumping up £10 billion a year to tackle the Covid operations backlog and reform long-term care for the elderly – with sources telling this newspaper that Javid had been given the job on condition he joined forces with the PM to put pressure on Sunak.

The Chancellor struck a hard bargain, telling Johnson that it could only be funded with a dedicated one per cent rise in National Insurance, which worried Tory backbenchers conscious of the manifesto commitment not to raise taxes.

Sources say that ‘the final wrinkles’ in the NI plan are being ironed out. Sunak is also close to securing agreement from No 10 that the ‘triple lock’ which protects the level of the state pension should be reformed to limit the expected £4 billion hike next year.

Officials have tried to reduce some of his workload by working through his red boxes of official papers – but say he insists on doing them himself anyway. Said one: ‘We have a big autumn coming up with social care reform, the Cop climate summit and possibly a Budget at the end of October – he hasn’t decided yet – so we don’t want him to burn himself out before then.’

Insiders agree that the relationship between No 10 and No 11 is not ‘toxic’ as it was under Blair and Brown or Theresa May and Philip Hammond – but nor is it as harmonious as it was under David Cameron and George Osborne.

Johnson’s strongest relationships are with Javid and his age-old ‘frenemy’ Michael Gove.

One friend of Sunak – who was not speaking with the Chancellor’s knowledge or authority – put the counter view, saying: ‘Boris doesn’t listen to anyone. He thinks he is right 100 per cent of the time, as with vaccine passports, which shows Boris in pure Fuhrer mode – ‘ver iz your papers?’ ‘

They added: ‘It has been noticeable that Boris has been carving up decisions with Sajid since he came back to the Cabinet, far more than he has with Rishi. Boris likes to keep people in their boxes. It’s how he operates.’