‘Tell me the designer was already drunk’: CAMRA is blasted for launching ‘tasteless and insensitive’ covid-themed pint glass decorated with images of virus microbes

Bosses at the Campaign for Real Ale have been blasted for their ‘tasteless and insensitive’ covid-themed festival pint glasses.

The limited-edition glass for this year’s ‘virtual’ Great British Beer Festival has been printed with images of white virus cells.

The group has now apologised for the design after the design sparked fury on social media.

Hundreds of people criticised the move, with many saying they would cancel their CAMRA memberships because of it. 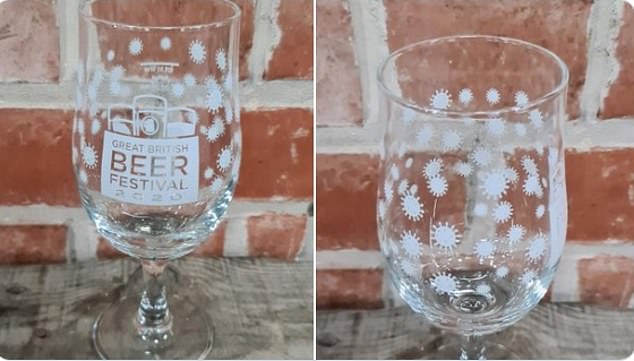 CAMRA has been blasted for this ‘tasteless and insensitive’ Covid-themed pint glass for its 2020 beer festival glasses.

Twitter user @WithintheWalls was outraged that the company was seen to be celebrating 41,449 deaths with the Corona virus branded glasses adding ‘What utter disrespect?’

Another Twitter user @ashleymeerkat was in such disbelief she queried whether the designer was already ‘drunk’ when coming up with the idea.

TheTwitter user @Jesslionman said: ‘Uh…Well here’s a short sighted promotion. Shame on you CAMRA, I suspect you will lose a lot of respect over this!’

And Twitter user @Gary_Anderson said he couldn’t believe the glass design had ever been ‘approved’ stating: ‘I know it’s ‘only a glass’ but how the entire chain of personnel involved in the design, commissioning, approving and manufacture of this glass all agreed that this was a good idea is unbelievable’

Manchester brewery Beer Nouveau retweeted CAMRA’s post and added: ‘I can see what their intentions were with this. But this is a seriously bad execution of idea, and the following non-apology doesn’t help.’

Some have defended the glass design, saying: ‘It’s the most quintessentially British thing to do, to take what has hurt, oppressed and impacted you adversely and make it a figure of fun.’

The design has been released in support of this year’s Great British Beer Festival, which has gone virtual for its 2020 edition and is due to take place next weekend.

Total disgrace: CAMRA officials have apologised for their insensitive decision but Twitter users are sickened

Following the backlash, CAMRA has posted a public apology and statement.

Festival organiser Catherine Tonry said: ‘As someone who has suffered lasting lung damage after contracting COVID-19, I am all too aware how serious the illness can be and the devastating and long-term impact it has had on so many of us.

‘I sincerely apologise to anyone who has taken offence to the glass theme.

‘We choose a theme every year and wanted to ensure the design recognised what was at the front of everyone’s mind.

‘COVID-19 has been the defining event of 2020, and has severely impacted the beer and pub sector – as well as many of our personal lives.

‘In fact, this is the first time we have held the festival digitally in over 40 years of hosting the Great British Beer Festival.

‘We hope that despite the difficulties faced by many, the festival will give people the chance to come together over a pint and discover new brewers and cider producers to support throughout this period of uncertainty.’