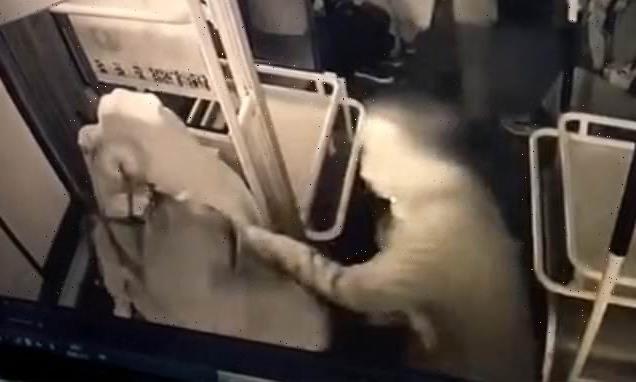 Bus driver knocked out by passenger frustrated by slow-moving vehicle

This is the disturbing moment a bus driver in northern China was knocked unconscious by an elderly man.

The CCTV footage, filmed in the city of Harbin in Heilongjiang Province on October 25, shows a 68-year-old man swing a trolley at a bus driver’s head.

Reports state the attacker was irate because he felt the bus was being driven too slowly.

After a heated argument between the driver and his attacker, the elderly man lashed out at the bus’s operator.

Jin, the driver, was knocked out cold by the blow for a few seconds.

After coming round, Jin called police and the elderly attacker was arrested.

Having suffered a mild concussion and soft tissue damage, Jin is reportedly resting at home.

The irate passenger’s dangerous behaviour echoes a similar incident from June 2020 in the southern Chinese province of Fujian.

The woman had missed her destination during sleep and was furious when she woke up on a different street in the southern province of Fujian.

She kicked the bus doors angrily, yelled at the transport worker before launching the assault on him while he was still driving.

Police have imposed ‘criminal compulsory measures’ on the woman on suspicion of ‘endangering public security by dangerous means’.

Those who are found guilty of the crime can be sentenced to death if the circumstances are particularly serious, according to China’s top law-enforcing authority.

Why Shiba Inu Is Far Better Than ‘Boomer Memecoin’ Dogecoin, According To Bloomberg Editor
Technology