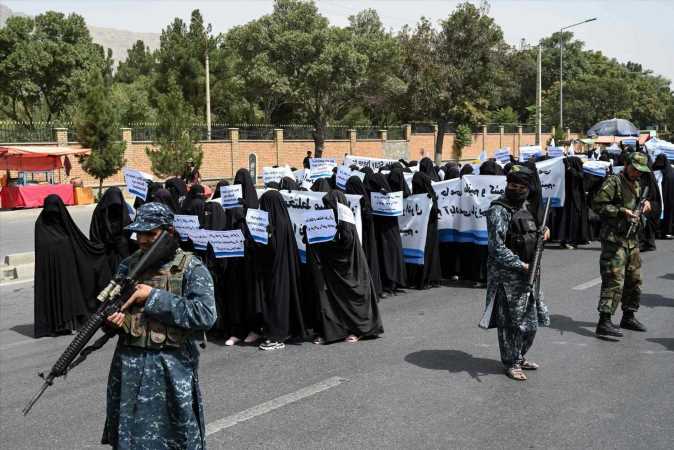 HUNDREDS of Afghan women wearing full-face veils were reportedly forced to take part in a pro-Taliban rally outside a university flanked by armed fanatics.

The terror group is continuing to brutally clamp down on women's freedoms as thousands live in fear for their futures after the brutal, oppressive and sexist laws enacted by the group in the 90s. 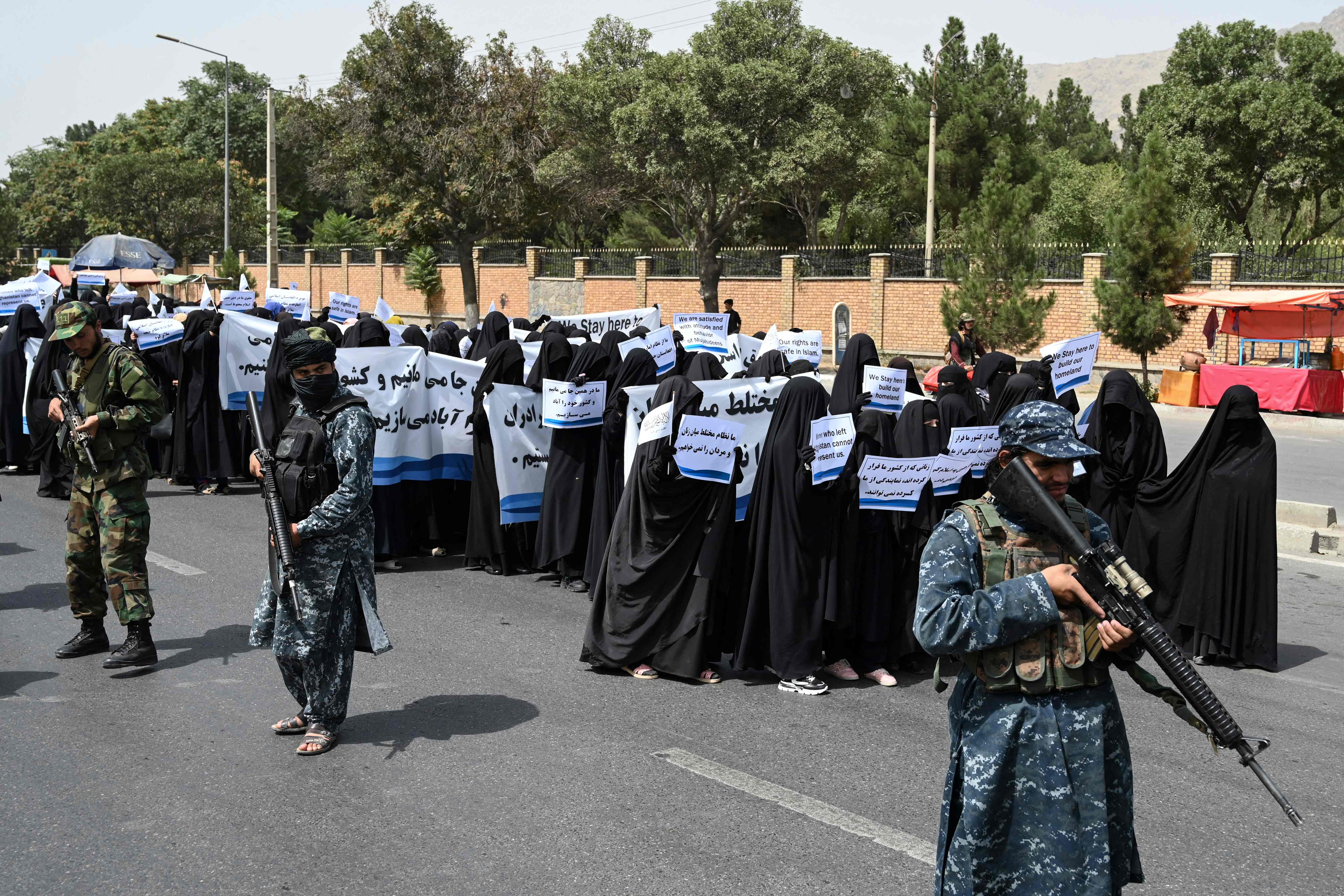 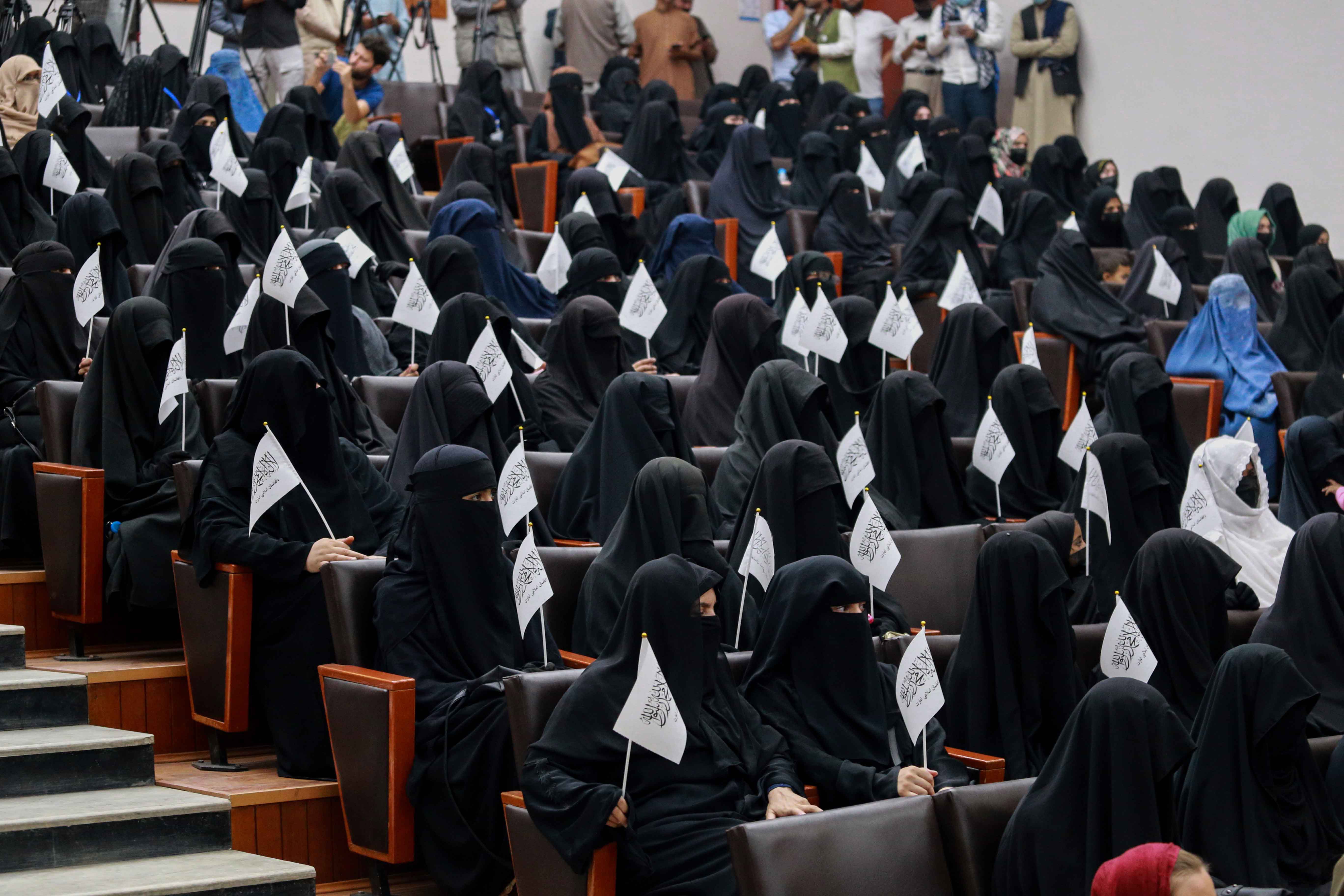 But today, about 300 women – covered head-to-toe in accordance with strict new dress policies for education – sat in rows at a Kabul university lecture theatre, pledging commitment to the Taliban's hardline policies on gender segregation.

They waved Taliban flags as speakers railed against the West and expressed support for the Islamists' policies.

A handful wore blue burkas, which have only a small mesh window to see from, but most wore black niqabs covering most of the face apart from the eyes. Many also wore black gloves.

Women's rights in Afghanistan were sharply curtailed under the Taliban's 1996-2001 rule, but since returning to power last month they have claimed they will implement a less extreme rule.

This time, women will be allowed to attend university as long as classes are segregated by sex or at least divided by a curtain, the Taliban's education authority has said.

They must also wear an abaya robe and niqab.

The women, who organisers said were students, listened to a series of speeches at Shaheed Rabbani Education University in the capital, Kabul.

Large Taliban flags were poised on either side of the podium, as the female speakers criticised women who have protested across Afghanistan in recent days.

They also defended the new government of the Islamic Emirate of Afghanistan, which has banned demonstrations unless permission is granted by the justice ministry.

Daud Haqqani, director of foreign relations at the education ministry, said the protest was organised by the women, who had asked and been granted permission to demonstrate.

"We are against those women who are protesting on the streets, claiming they are representative of women," said the first speaker, covered head to toe.

Some in the audience held babies, who occasionally cried during the speeches, while others were young girls clearly too young for university.

A student named Shabana Omari told the crowd she agreed with the Taliban's policy that women should cover their heads.

"Those not wearing the hijab are harming all of us," she said, referring to the headscarves worn by many Muslim women.

"The hijab is not an individual thing."

Women will be safe after this. We are supporting our government with all our strength.

Omari concluded her speech by leading a chorus of "Allahu Akbar", or "God is greatest".

Another speaker, Somaiya, said history had changed since the Taliban came back.

"After this we will not see 'bihijabi' (people not wearing headscarves)," she said.

"Women will be safe after this. We are supporting our government with all our strength."

After the speeches in the meeting hall, the women walked in organised lines a short distance on the street outside, holding printed banners and flanked by Taliban soldiers carrying rifles and machine guns.

The public demonstration was in stark contrast with scenes in Kabul and elsewhere earlier in the week, when Taliban fighters fired into the air to disperse a number of protests against their rule, shooting two people dead.

"Women who left Afghanistan cannot represent us," one pro-Taliban banner on Saturday read.

"We are satisfied with attitude and behaviour of Mujahideens (Taliban)" read another.

The Taliban say they want to distance themselves from the harsher policies of old, when half the population was excluded from work and education.

Under new rules, women may work "in accordance with the principles of Islam", the Taliban have decreed, but few details have yet been given as to what that exactly might mean.

Meanwhile, women in some circumstances have stay in "waiting rooms" until men have left the building.

And it has been reported the Taliban executed a pregnant female police officer in front of her kids because she took down one of their flags.

Women already face being whitewashed from public life – with shop fronts featuring female faces being painted over and female newscasters being replaced on TV.

The brutes have already reportedly burnt to death a woman they said served below-par cooking to its members.

And Taliban squads have been going door to door in Afghanistan kidnapping children as young as 12 to use as child brides and sex slaves since they swept back to power in Afghanistan. 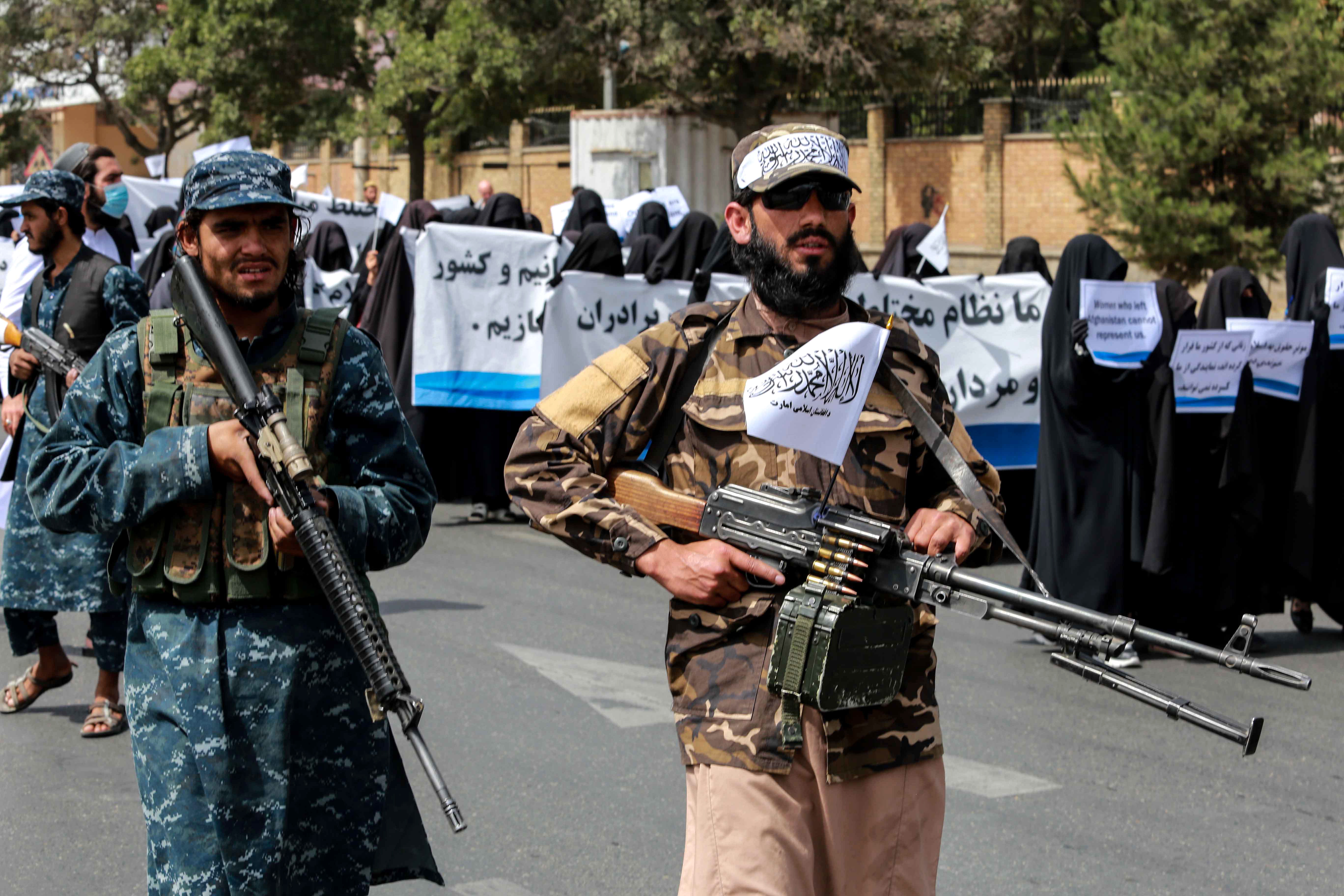 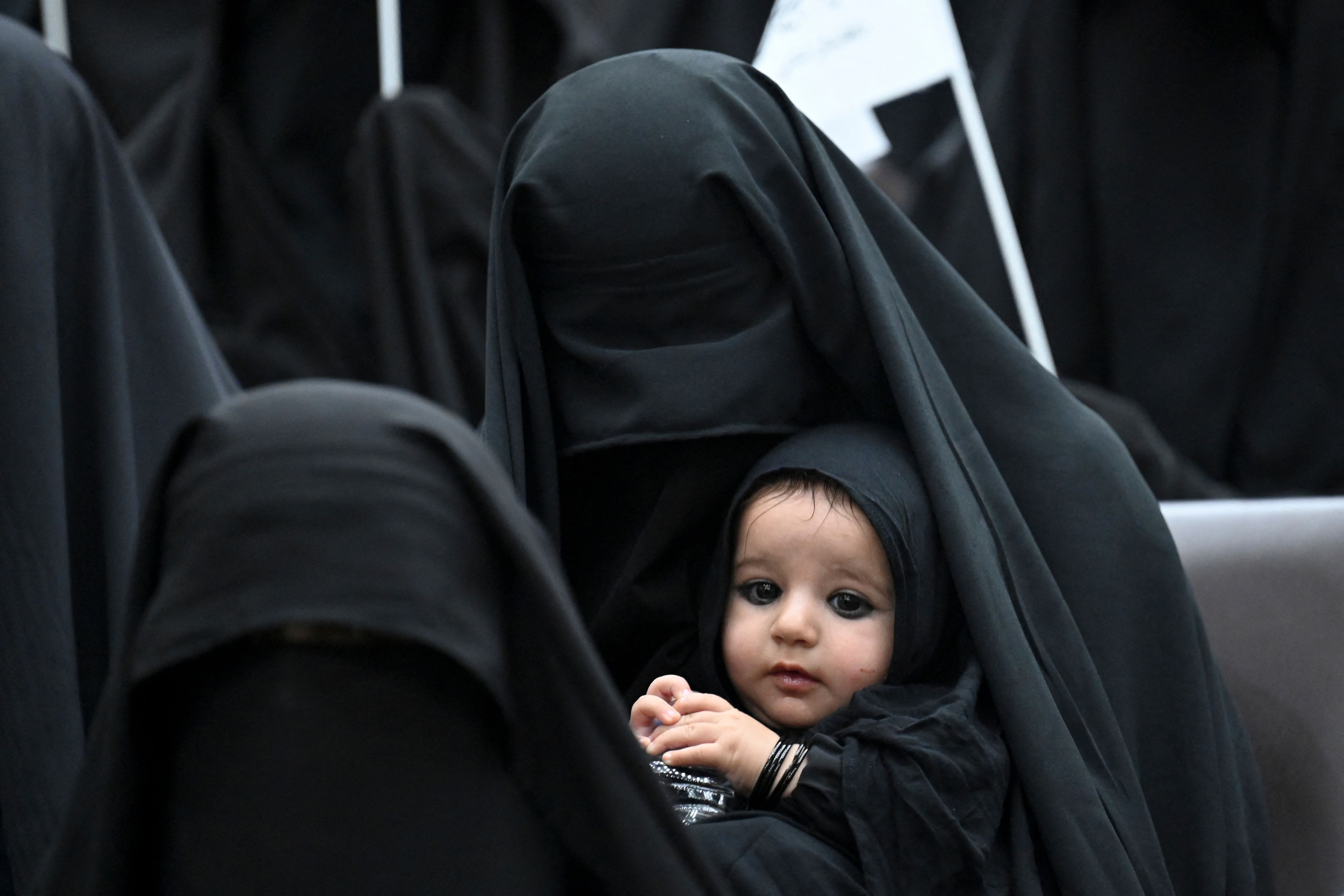 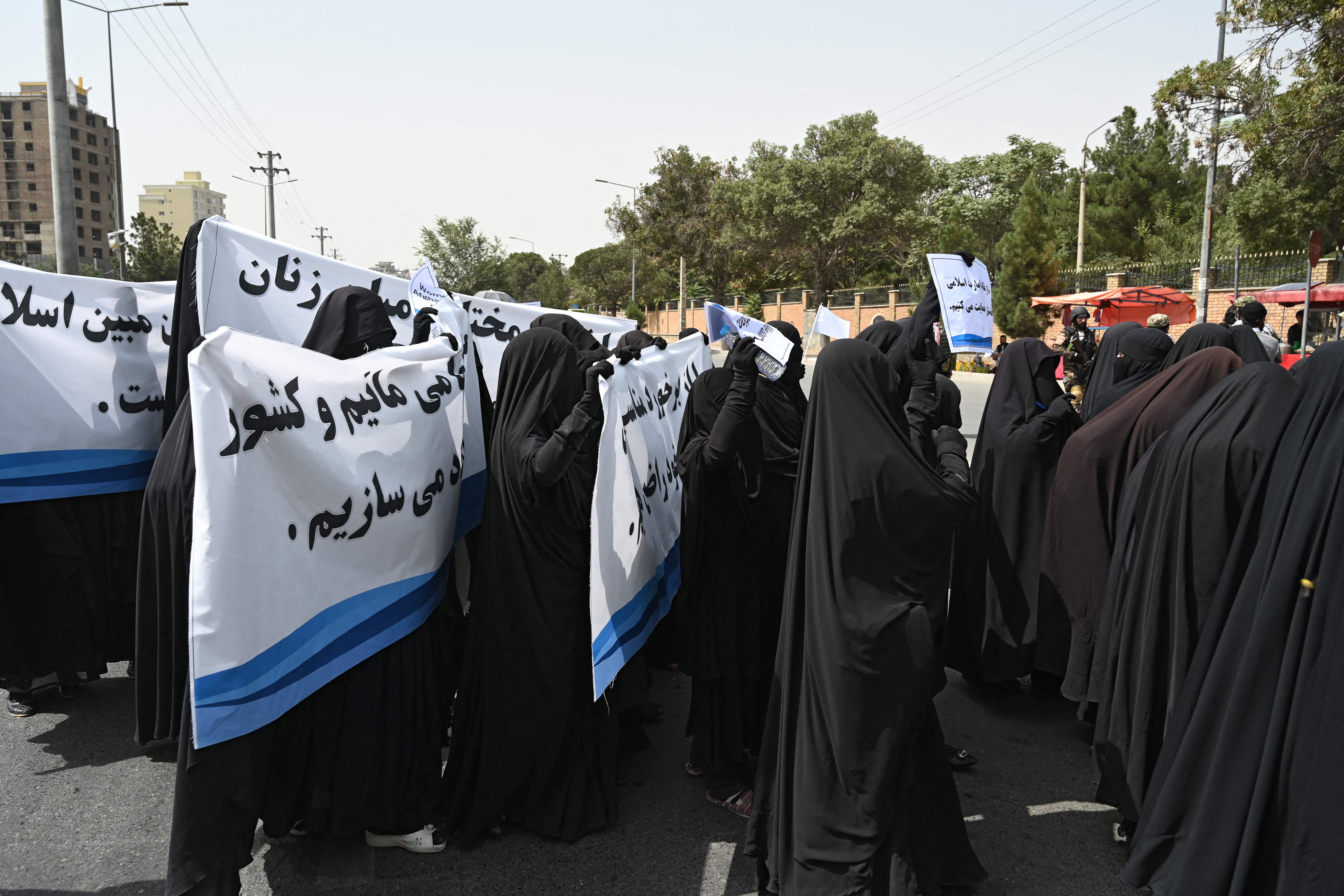