What remains unforgivable is that the fear campaign appeared to be a calculated election strategy. 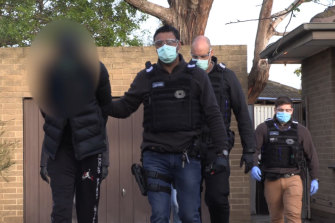 Many people of African appearance suffered as the result of a 2018 Liberal Party campaign which claimed there was an African crime crisis.Credit:Victoria Police

In that election we saw, as observed by Misha Ketchell, editor of The Conversation, “the most shameless opportunism dressed up as leadership”. Ketchell wrote in this masthead that more than a year before the African gang crisis, he had found himself in a private conversation with a senior minister in the Turnbull government. The minister told him that he was concerned about African violence in Victoria. He then “made it clear that he and his colleagues saw a political opportunity to get involved and use the issue to help the Liberal opposition win the next state election in Victoria”. Prompted by criminal acts committed by young people, described by the media as of “African appearance”, the campaign of fear began in January and lasted until November 2018.

The consequences of the fear campaign, more likea racist campaign, were devastating and unrelenting. Community legal centres reported a more than 50 per cent increase in racist attacks on African Australians and other people of colour, according to the Federation of Community Legal Centres. Victoria’s Equal Opportunity and Human Rights Commissioner reported that “racially divisive statements about the African Australian community had contributed to a 34 per cent increase in the number of reports of racial discrimination over the past financial year”.

A survey of 2500 people living across 150 suburbs in Melbourne by Associate Professor Rebecca Wickes of Monash University found that one in four people reported “very low levels of warmth towards African people”.

There were threats of violence by vigilante groups against African communities. Nationalist and neo-Nazi groups warned of planning to “take a stand on the streets” in response to Melbourne’s so-called “African gang crisis”. Online, there was a Facebook group where people were being called on to “get together and do some night walking … [and] hunt these so-called human beings”.

The real fear is that the return of Matthew Guy may be a return to these realities. What is a political strategy to some can be a tragedy to others. It may be debatable whether the campaign was racist; what isn’t debatable is the racism it unleashed and the ongoing impact of such a dehumanising campaign. Even then, it was apparent that when the voting was done, and political careers were secured or lost, when the journalists put down their pens and headed to their families, and when the publishers were onto the next story, the resultant scars from the campaign of fear and the subsequent moral panic remained carved into our lives.

I was reminded recently by Ajak Kwai, a prominent South Sudanese singer living in Melbourne, how raw everything still feels. She wrote that she wanted to disappear this time because she has no “skin left to tolerate Matthew Guy”. She said: “He left a big scare on us last time and now he is back and we [have] barely recovered from his wounds.”

It will take a long time to recover from the fear campaign. Although South Sudanese Australians were its targets, they were not its only victims. The divisive nature of that campaign sought to corrode and weaken the ties that bind us into a shared identity as Victorians. As he steps into his role as Opposition Leader, we will wait to see whether Matthew Guy will be a leader for all.

There is no denying that there are serious issues to be address, there is no excuse for criminal conduct. There also should be no place for politics that pit Victorians against each other, especially in these times. It is important to remain alert that divisive cracks in society have the potential to be filled by the “worst” of us. It is not surprising that some of the individuals who weaponised the “African gangs crisis” are part of neo-Nazi groups that now present a real challenge to security bodies.

For those who felt vilified and dehumanised, the best apology would be leadership, not opportunism.