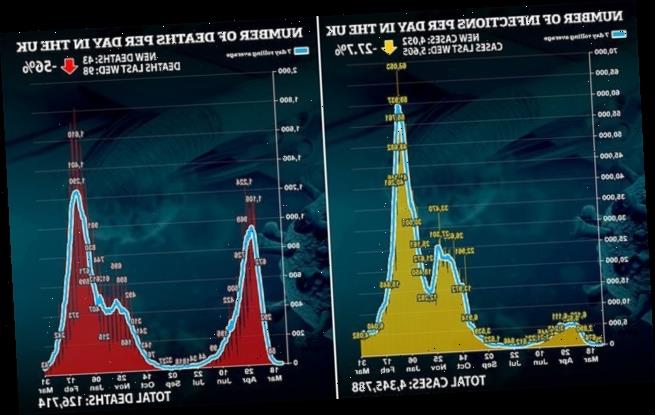 Britain’s daily Covid cases have fallen by 28 per cent in a week, official figures revealed today as crowds flocked to parks and beaches amid the second day of record-breaking March heat.

Department of Health bosses posted 4,052 lab-confirmed cases and another 43 fatalities – down 56 per cent on last Wednesday.

The vaccination drive also dished out more second doses (270,526) than first shots (224,590) for the first time since it was launched in December. Ministers warned the inoculation drive would have to focus on dishing out booster jabs towards the end of March and throughout April to ensure vulnerable Brits had their top-ups within the crucial 12-week deadline.

Dr Yvonne Doyle, Public Health England’s medical director, said it was ‘encouraging’ to see that deaths were still falling but warned Britons ‘we cannot drop our guard’ against the virus.

‘There are still as many people in hospital now as there were at the start of the second wave, and tens of thousands of us are getting infected every week and could become seriously ill,’ she said. ‘As restrictions lift and the weather improves, we cannot drop our guard. We’re not out of the woods quite yet.’

She urged Britons to continue washing their hands, wearing facemasks and social distancing to stop Covid from spreading, adding: ‘Case numbers are still high in certain places and looking forward they are certainly not predictable, so your actions are still saving lives.’

It came as revellers were making the most of their newfound freedom this week after Covid restrictions were partially lifted on Monday, allowing up to six people or two households of any size to meet outdoors.

But many threw caution to the wind, with hundreds enjoying a sundown party on the beach in Brighton last night while seafronts, parks and promenades were packed in Leeds, Sheffield, Nottingham, Birmingham and London.

Communities Secretary Robert Jenrick today urged people to make the most the latest easing of lockdown restrictions in England in a ‘sensible, cautious’ manner, enjoying the sunshine but also being careful and sticking to the rules.

Their comments come after Boris Johnson said he hoped people would take advantage of the ‘beautiful weather’ to play sport or exercise, while also emphasising the country should still ‘proceed with caution’. 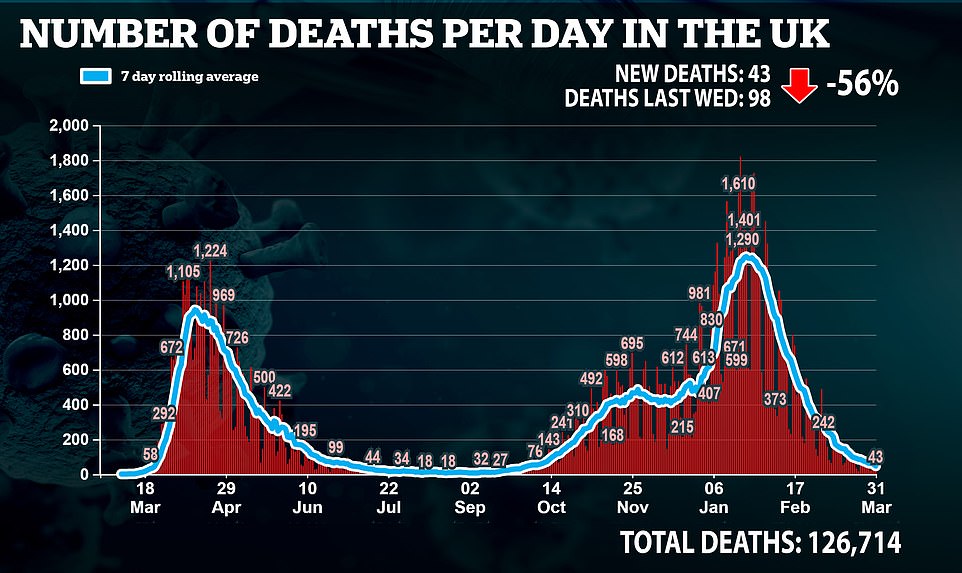 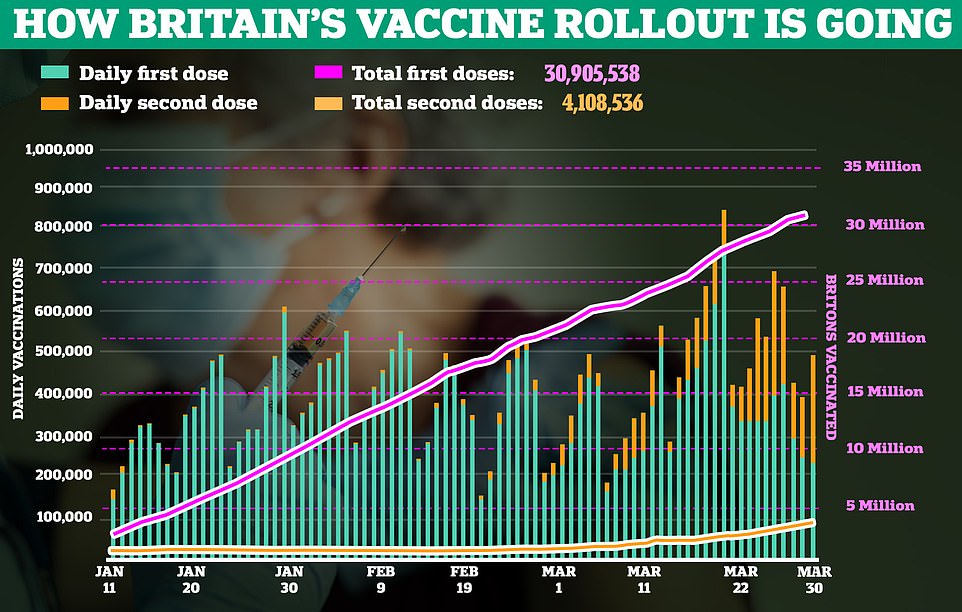 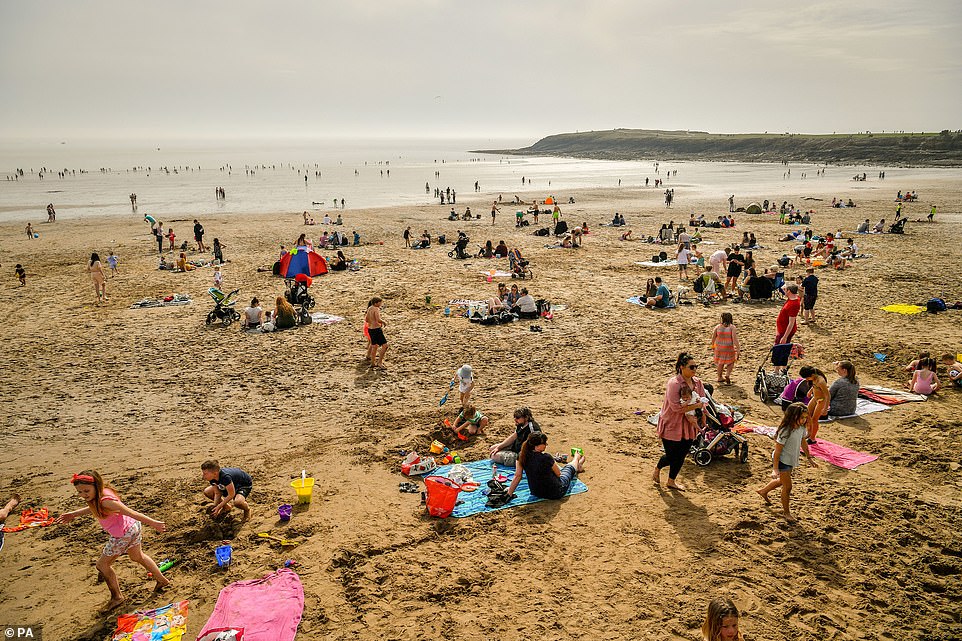 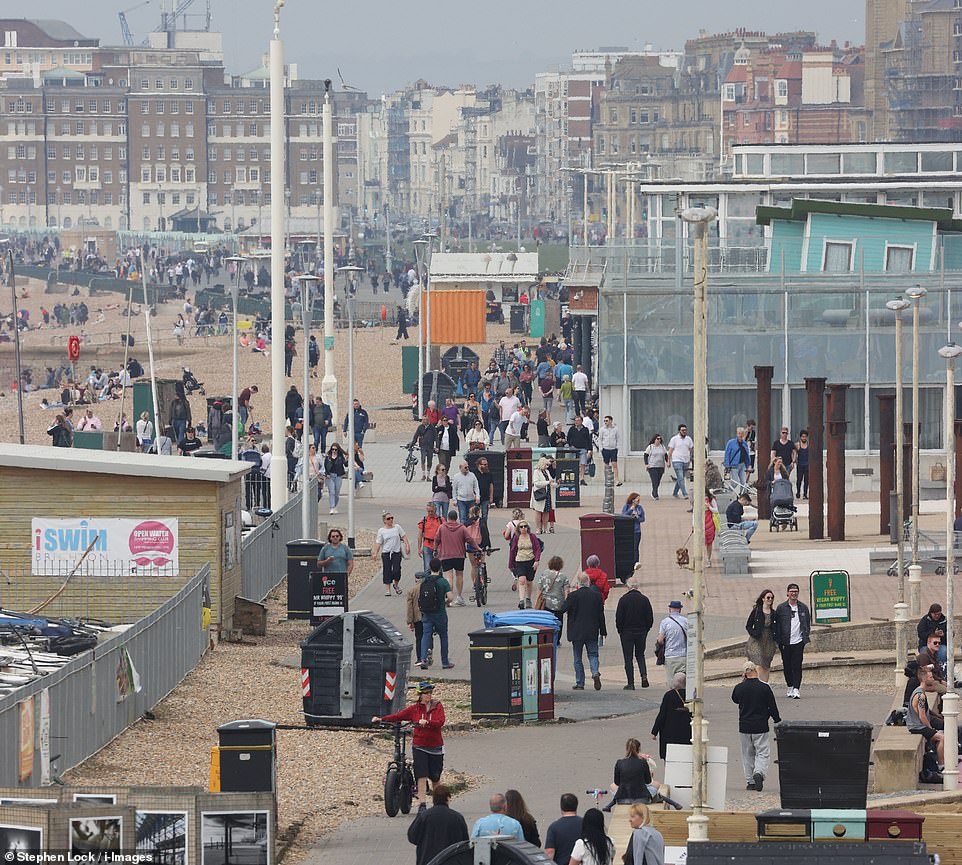 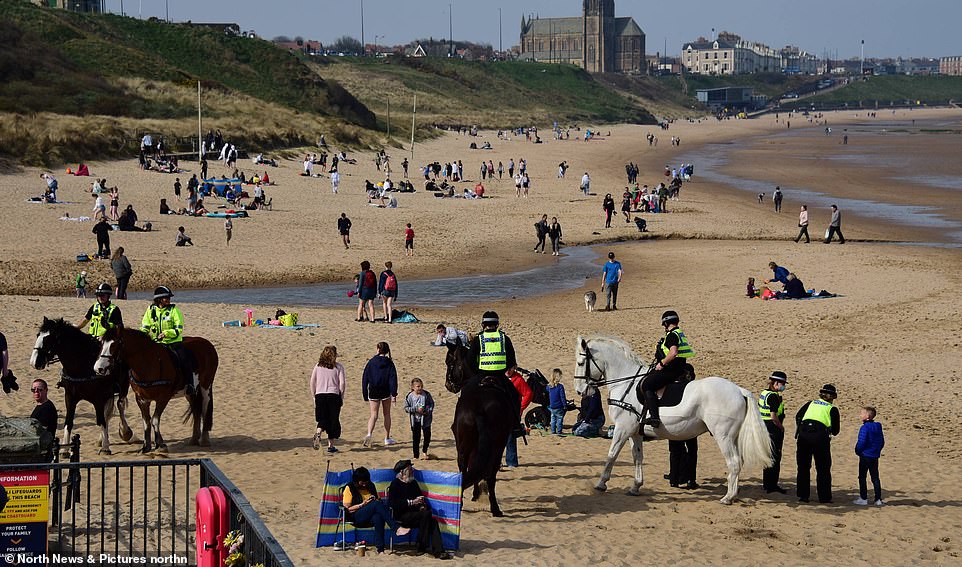 The European Medicines Agency (EMA) said there was ‘no evidence’ to support halting the jab for people under 60, adding that the benefits of protecting against Covid far outweighed the risk of the extremely rare condition.

Analysis by the regulator found just 62 out of 9.1million people vaccinated with the British-made jab worldwide had developed the brain clot, known as cerebral sinus venous thrombosis — a rate of about five per million.

Emer Cooke, the EMA’s executive director, told a press conference this afternoon there was no proof the vaccine had caused CSVT in any of the cases and admitted those people might have developed the condition regardless.

The EMA’s ruling puts the watchdog at odds with many other major EU member states which have also restricted the jab’s rollout in certain age groups, including France, Spain and Norway.

Cases of CSVT have been most common in Germany, where 31 out of 2.7million vaccinated people suffered the deadly brain clot – a rate of one in 90,000. It led to the nation banning the vaccine in under-60s last night.

The EMA revealed twice as many women had received AstraZenca’s vaccine in Europe than men, before adding that the people normally most at risk of CSVT are females aged 35 to 45, possibly explaining the higher rates.

Until recently Germany had banned the AZ jab for over-60s due to initial fears about blood clots, meaning its rollout had for weeks targeted those most susceptible to CSVT.

Ms Cooke said: ‘At present, the experts have advised us that they have not been able to identify specific risk factors, including age, gender or previous medical history of clotting disorders, for these very rare events.

‘And, as I mentioned previously, a causal link of the vaccine has not yet been proven but it is possible, and further analysis is still ongoing. According to the current scientific knowledge, there is no evidence to support restricting the use of this vaccine in any population.’

In another day of Covid news:

Birmingham council suspended mowing across its parks today so they could focus on litter picking instead – while Nottingham closed two of its parks this afternoon after ‘appalling scenes’ of crowds there in recent days.

The biggest crowds appeared to be at Woodhouse Moor in Leeds, where hundreds of people gathered – and West Yorkshire Police warned they would ‘disperse groups of over six, using fines where appropriate to do so’.

Elsewhere in the region a 14-year-old boy died after getting into difficulty at a waterfall. He was spotted struggling in a pool at about 6pm yesterday below the Goit Stock Waterfall beauty spot at Cullingworth near Bradford.

And there was a major clean-up in parks and beaches today after people left behind mounds of litter including disposable barbecues, beer cans and takeaway boxes on the hottest March day in Britain for 53 years yesterday.

Warwick University viruses expert Professor Lawrence Young warned people mixing in parks could turbo-charge the spread of the virus, telling MailOnline today: ‘We all expect the rates of infection to increase when these restrictions are removed. That’s why we built gaps into the roadmap. But this (yesterday’s scenes) is a real worry.

‘What we’ve got is a serious situation where the younger population, who are responsible for the majority of the spread of the virus, are then mixing in parks. They think it’s OK to mix outside and you won’t get infected but if you are near someone who has the virus – is shedding the virus – then you are at risk.

‘The transmission of the virus is clearly reduced when you are in a well-ventilated space and the sun is shining, but if you are in close proximity with someone who is infected you could get infected too.’

In North Tyneside, the picturesque Longsands Beach in Tynemouth was strewn with rubbish this morning after sunseekers flocked to the coast to enjoy the hot weather as temperatures soared to almost 68F (20C) in the area.

There were dismal scenes on the sands today – with cans, coffee cups and plastic bags scattered across the shore. One onlooker said: ‘It’s heartbreaking to see. This is one of the most beautiful beaches in our region.

‘We’re very lucky to have access to such a stunning coastline. It is so upsetting to see so much rubbish. People should have more respect for nature, and stay away, if they can’t clean up after themselves.’

Nicola Smith, 40, had planned to watch the sunrise with her eight-year-old daughter Leah, but instead of relaxing as the sky turned red, the pair began to clear the sands of litter left behind.

The health and social care worker said: ‘It’s absolutely awful. We got up at 5.45am as we wanted to enjoy the sunrise. But when we got here we just could not believe the amount of rubbish.

‘We decided to start picking up the litter instead. There’s so much. People have had barbecues and left behind beer bottles, clothes, shoes, even phone charges. You’ve got to be so careful where you tread. It’s just not safe. My daughter has been collecting rubbish for an hour and a half now.

The European Medicines Agency (EMA) said there was ‘no evidence’ to support halting the jab for people under 60, adding that the benefits of protecting against Covid far outweighed the risk of the extremely rare condition.

Analysis by the regulator found just 62 out of 9.1million people vaccinated with the British-made jab worldwide had developed the brain clot, known as cerebral sinus venous thrombosis — a rate of about five per million.

Michael Bolton wants you to break up with Robinhood
Technology