An independence referendum for the Pacific island of Bougainville has been delayed again by the governments of the island and Papua New Guinea (PNG) but will be held this year, the referendum commission said.

Voting in the referendum will now open on November 23, having been pushed back from a revised date of October 17 that was announced in March. 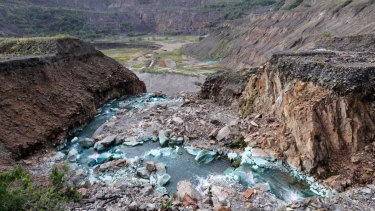 The Panguna copper mine in Bougainville was closed in 1989.Credit:Alamy

Under a peace agreement signed after a nine-year civil war with the PNG mainland ended in 1998, Bougainville has until mid-2020 to hold the referendum, which had originally been scheduled for June.

"The referendum will be held this year," Bougainville Referendum Commission chair Bertie Ahern said in a statement after the two governments had decided last week that extra time was needed to create a more credible electoral roll.

"We will use these precious few weeks wisely, and we ask for public support to make this referendum roll as inclusive as possible and one that people can trust," said Ahern, a former prime minister of Ireland.

The civil war was largely about how profits from a giant copper mine, Panguna, should be shared, and it forced resources giant Rio Tinto to abandon the mine.

At the time, the mine was the largest source of export revenue for Papua New Guinea and comprised about 7 per cent of global copper production.

The conflict between Bougainville's rebel guerilla army and Papua New Guinea forces left as many as 20,000 dead, the worst conflict in the Oceania region since the World War II.

Rio Tinto divested its stake in the shuttered mine's operator, Bougainville Copper, in 2016.

The outcome of the referendum, which analysts expect to support independence, is then subject to ratification by PNG's Parliament. (Reporting by John Mair; Editing by Simon Cameron-Moore)

Indian troops lock down its only Muslim-majority state, Pakistan warns of war
Technology