‘There’s every chance of getting a deal’: Boris Johnson boosts hopes of a Brexit breakthrough in EU trade talks as deadline looms

Boris Johnson last night declared ‘there is every opportunity of a deal’ as he boosted hopes that a Brexit trade agreement will be struck with the EU.

The Prime Minister ditched his warning that No Deal is the most likely outcome as negotiators revealed fishing quotas are the last stumbling block.

MPs and peers will rise for the Christmas recess today, but have been told they could be recalled with as little as 48 hours notice to approve a deal if one is agreed.

Downing Street said a Commons vote could be held as soon as Monday, although officials have pencilled in the week between Christmas and New Year as more likely. 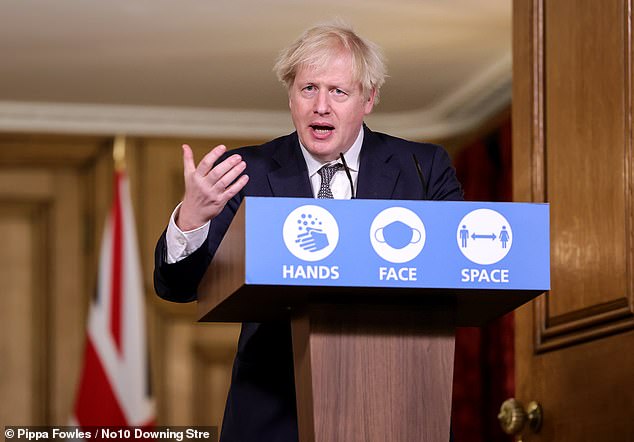 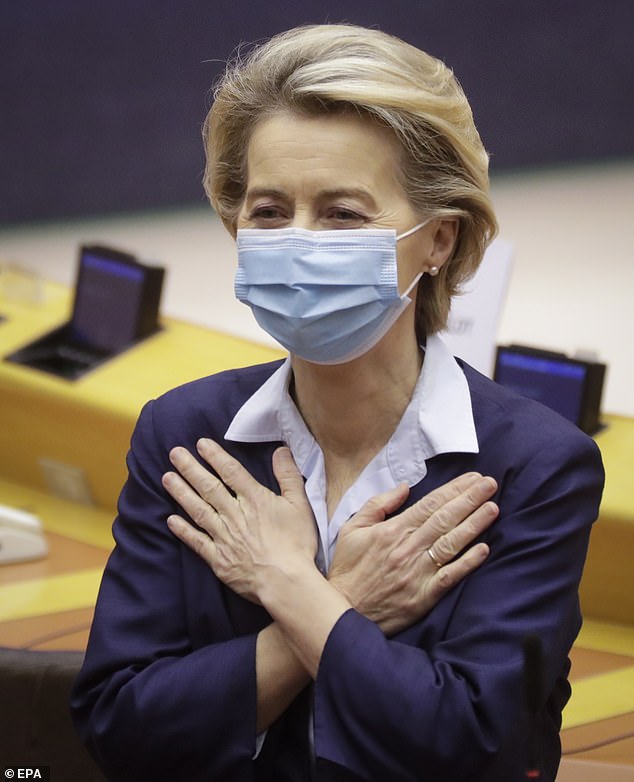 MPs and peers will rise for the Christmas recess today, but have been told they could be recalled with as little as 48 hours notice to approve a deal if one is agreed. Pictured: European Commission President Ursula von der Leyen

The Government has drafted plans to fast-track the legislation through Parliament in just a couple of days, including by sitting for longer hours.

The negotiating teams in Brussels are now trying to find an agreement on fish quotas, while putting the final touches to a joint mechanism to deal with disputes if the UK and EU in the future want to vary standards on labour, environment and state subsidies.

One source close to the talks last night said: ‘The general mood is more positive, but the whole thing could collapse on fish.’

Brussels wants EU trawlers to retain almost all their existing rights to fish in British waters, while Boris Johnson has demanded that their share of quotas should be cut by around 70 to 80 per cent in terms of value.

The Prime Minister is understood to have offered to put off most of the changes for three years, but France is taking a hard line.

Fishing accounts for just 0.12 per cent of the UK’s GDP but is seen as hugely symbolic. British fisherman argue their industry was sacrificed to secure the country’s place in the European Economic Community in 1973.

The EU has ditched its demand for a ‘ratchet clause’ to keep the UK tied to future changes in Brussels’ standards on labour, the environment and state subsidies

Mr Johnson has said that no prime minister could accept a situation where the EU could automatically ‘punish’ the UK with tariffs if it failed to follow future regulations from Brussels.

Negotiators are finalising plans for a joint dispute mechanism that could be triggered if a difference in rules was causing a significant distortion in trade.

EU officials said the teams of UK negotiator Lord Frost and his EU counterpart Michel Barnier have still been unable to agree on access for foreign boats to Britain’s waters. ‘I don’t have the impression that we are getting anywhere on fishing,’ said one French source.

At Prime Minister’s Questions yesterday, Mr Johnson struck a much more optimistic tone just days after he warned that it was most likely that Britain and the EU will fail to agree a trade deal.

He told MPs: ‘There’s every opportunity, every hope that I have, that our friends and partners across the Channel will see sense and do a deal.

‘And all that that takes is for them to understand that the UK has a natural right like every other country to want to be able to control its own laws and its own fishing grounds.’ As he appeared at Downing Street press conference yesterday afternoon, Mr Johnson declined the opportunity to repeat his warning about the likelihood of No Deal.

Asked if it was still his view it was the most likely outcome, he replied: ‘Well, again, that is very much a matter for our friends, they know what the parameters are and we’ve just got to make sure that we control our laws and control our own waters.’

On a Zoom call with Tory MPs last night, Mr Johnson joked: ‘The only mandatory thing from Brussels next year will be sprouts on Christmas table because we will have left the orbit of the ECJ (European Court of Justice).’

In Brussels, European Commission president Ursula von der Leyen said there is a ‘path’ to an agreement, but she conceded it is ‘very narrow’.

The senior EU official indicated that it is on fishing where the two sides remain furthest apart.

‘We do not question the UK’s sovereignty on its own waters,’ she said. ‘But we ask for predictability and stability for our fishermen and our fisherwomen.

‘And, in all honesty, it sometimes feels that we will not be able to resolve this question.’ German Chancellor Angela Merkel said the Eurpean Commission and the UK will keep talking ‘until the end of this week’.

Downing Street last night put parliamentarians on notice to return in haste in the event of a breakthrough. ‘Parliament has long shown it can move at pace and the country would expect nothing less,’ No 10 said.