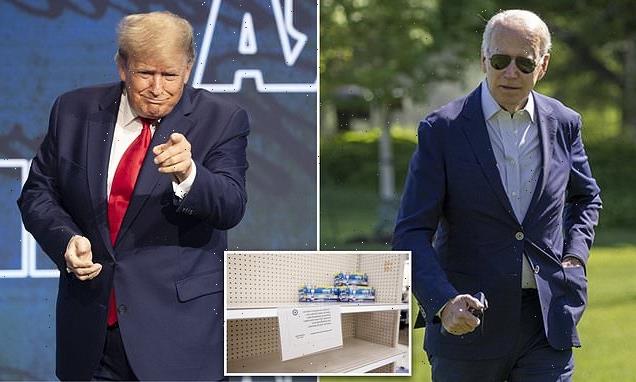 Biden is furious he is trailing Trump in the polls, erupted over ‘being kept out of the loop in the baby formula crisis’ and is trying to avoid being compared to Jimmy Carter, report claims

President Joe Biden has repeatedly complained to aides that he is less popular to Donald Trump and expressed frustration that he was not briefed properly on the baby formula crisis, according to officials and allies.

In a White House filled with complaints that it is failing to get its message to voters, a new report reveals that biggest source of concern is the president himself.

The result is plunging morale amid fears that a string of crises is painting him as the worst Democratic president since Jimmy Carter’s calamitous time in office.

Sources told Politico that Biden recently erupted about the way he was not kept up to speed about the enormity of the baby formula shortage that gripped much of the country.

He made his feelings clear in phone calls to allies after seeing cable news coverage of young mothers in tears as they described how they worried they could not feed their children.

The result of the crises – from high gas prices and soaring inflation to shortages on shelves – has been plunging poll ratings. 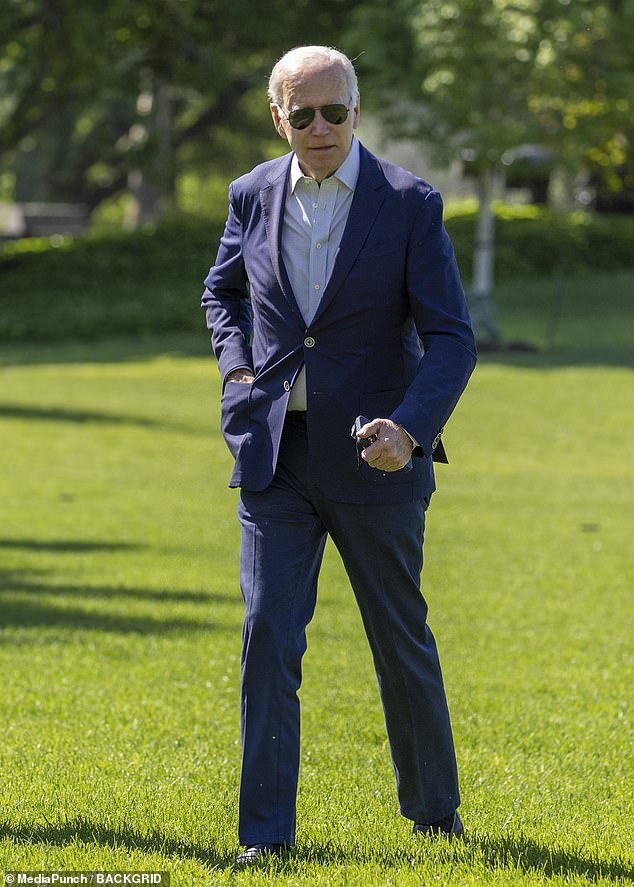 President Joe Biden returned from a weekend at the beach on Sunday. A new report details his frustration at the crises facing his troubled administration and his anger that he ranks as a less popular president than Donald Trump at this point in his presidency 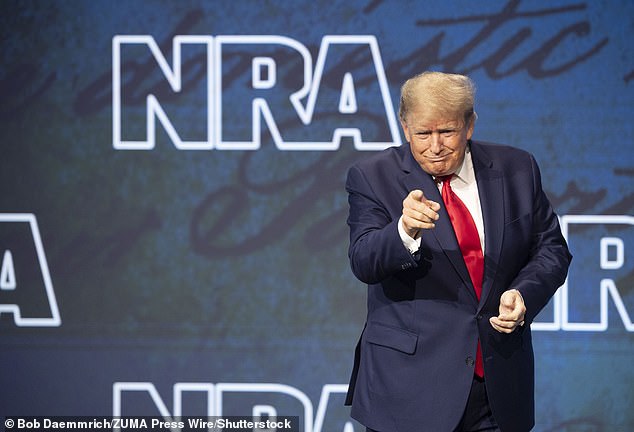 At this point in his president, some 41.6 percent of voters approved of Trump’s performance, according to an average maintained by FiveThirtyEight. Biden is at 40.7 percent 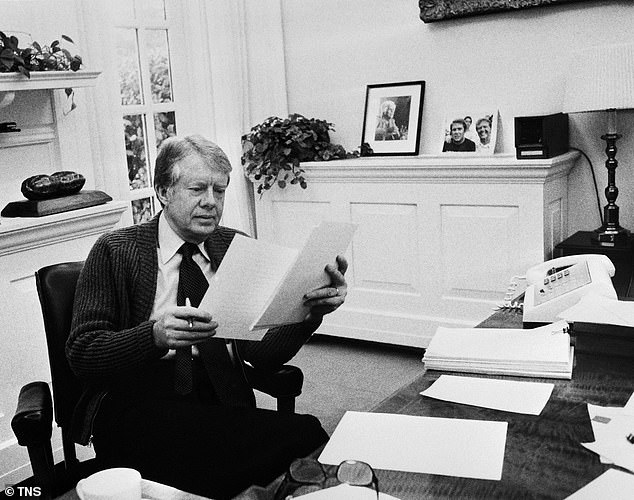 Morale in the White House has reportedly plummeted at the way Biden’s performance compares with that of Jimmy Carter, another first-term Democrat plagued by soaring prices

‘It’s something that has bedeviled quite a few previous presidents. Lots of things happen on your watch but it doesn’t mean there is a magic wand to fix it,’ said Robert Gibbs, who was a press secretary under President Barack Obama.

For Biden, the plunging polls mean his approval numbers are worse that Donald Trump’s at this stage in his presidency.

The president’s approval rating hovers just above 40 percent, while 41.6 percent of voters supported Trump at this point in his term, according to FiveThirtyEight’s average of multiple recent polls.

The number is now below that of every one of his predecessors since the end of World War II. Trump’s rating had long been an exception to that benchmark.

Biden reportedly refers to his predecessor as ‘the worst president’ in history and an existential threat to the nation’s democracy.

‘This depiction of the White House is simply divorced from reality,’ he tweeted.

‘And if these claims had been brought to us before publication, we would have said as much then.’

The baby formula crisis has been a particular source of anger for the president. It has had a disproportionate effect on the sort of blue-collar families with whom he identifies. 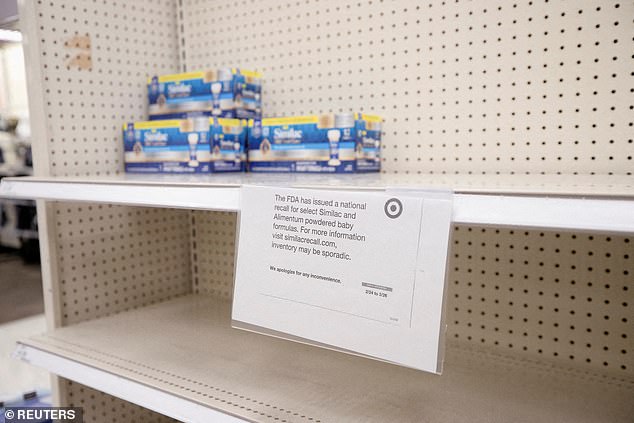 As a result he publicly claimed it took weeks for details of the crisis to reach him, leading aides to reportedly fear he looked out of touch.

The result has been a lack of clarity about who knew what and when, and at times farcical press briefings when Biden’s new press secretary, Karine Jean-Pierre, refused to say who had briefed the president.

‘Senior officials’ and the ‘usual channels,’ were the only details she offered last week, adding a layer of murk to an already unclear picture.

Adrienne Elrod, a senior aide on Biden’s transition team, summed up the frustration.

‘A lot of things are out of his control and we are frustrated and all Democrats — not just the White House but anyone with a platform — need to do a better of job of reminding Americans of how terrible it would be if Republicans take control,’ she said.

Biden hits the road this week, heading to California for the Summit of the Americas and to New Mexico to highlight his climate change push.

Aides hope that getting him out and about will allow him to take a message of progress to voters, while allies sharpen their attacks on Republicans as out of touch. 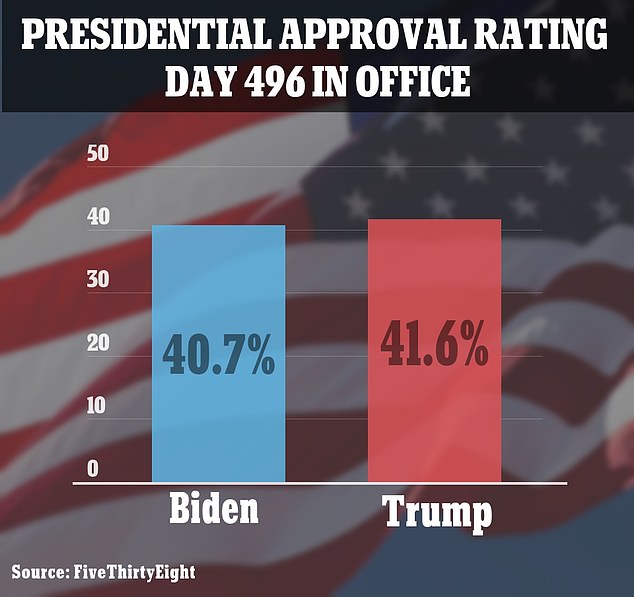 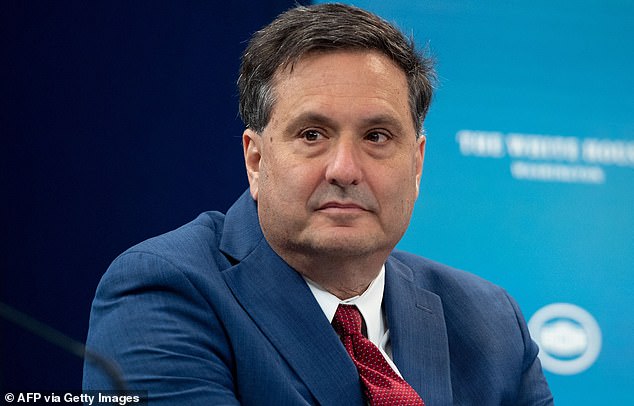 His staff might face another shakeup soon too on the heels of Press Secretary Jen Psaki’s departure, with reports that Chief of Staff Ron Klain might leave after November’s elections

The latest report comes after stories surfaced last week that Biden was furious at the way his aides kept walking back his public statements.

Biden believes his credibility is damaged by staffers when they correct his so-called ‘gaffes’, which reached boiling point in March when he said Vladimir Putin ‘cannot remain in power,’ NBC News reported.

He is also ‘twisted’ and ‘mystified’ by the fact that he is trailing by Donald Trump in the polls – as his approval ratings struggle to get above 40 percent – and has to remind those in his inner circle he is president.

It also suggests the Biden administration is headed for yet another staff shake-up, with Chief of Staff Ron Klain – known for putting up a vociferous defense of his boss on Twitter – expected to leave after November’s midterm elections.

Biden’s search for a potent midterm strategy to help Democrats keep their razor-thin control of Congress is also reportedly gaining urgency, even as the president grows more unpopular in the polls.

‘He shares the view that we haven’t landed on a winning midterm message…And he’s putting a lot of pressure on people to figure out what that is,’ an unnamed White House adviser told NBC.