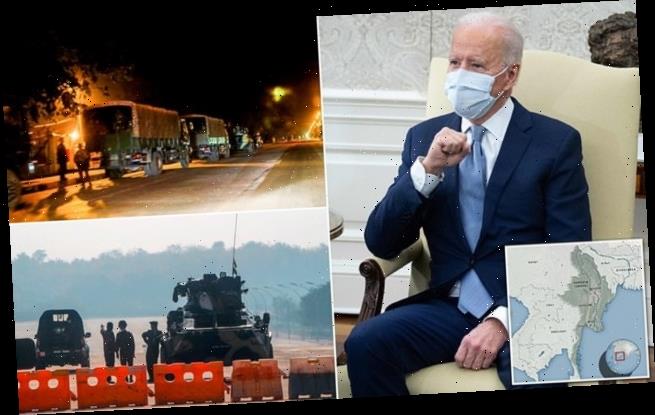 President Joe Biden threatened to reimpose sanctions on Myanmar on Monday as his administration debates whether to call the military takeover a ‘coup.’

Insiders familiar with the back-and-forth described the discussions as ‘chaos’ as officials fear that the White House calling the military takeover a coup could anger China and force the United States to withdraw foreign aid, Politico reported.

Myanmar’s army took power of the country early on Monday and declared a state of emergency after detaining de facto leader Aung San Suu Kyi along with members of her party. 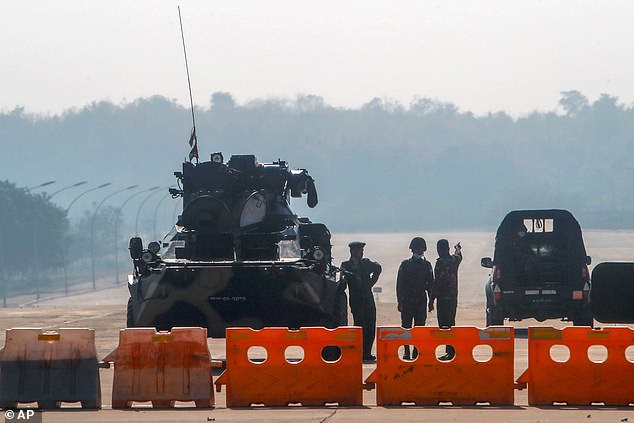 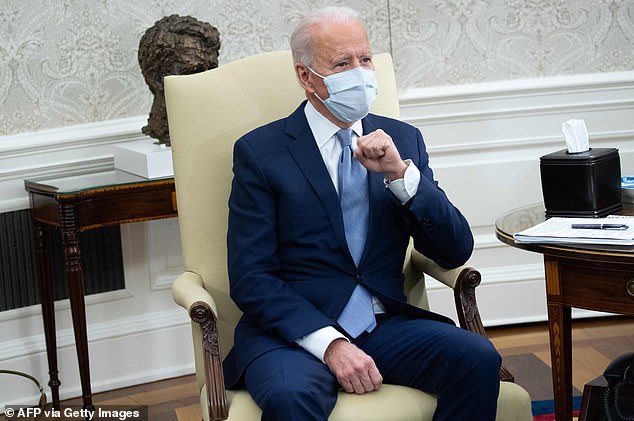 The military, known as the Tatmadaw, has had escalating tensions with the country’s civilian government over alleged election irregularities in November when Aung San Suu Kyi and her National League for Democracy party won in a landslide against the party backed by the military.

Min Aung Hlaing, the country’s commander-in-chief, has been appointed as acting president and said the country will hold elections in one year.

‘Recent events in Burma obviously have the makings of a coup, but the State Department is doing the required legal and factual analysis. We will await the outcome before making an assessment,’ a senior State Department official told ABC News.

The administration has so far refrained from calling the takeover a coup — a term the term would require the U.S. to cut off aid to Myanmar’s government under the Foreign Assistance Act. 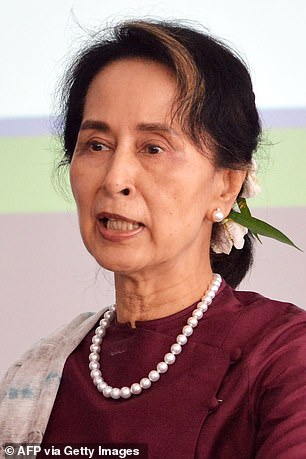 The law states that the U.S. must ‘restrict assistance to the government of any country whose duly elected head of government is deposed by military coup or decree.’

A congressional aide noted to CNN that the US is generous with its humanitarian aid to the nation’s governmental groups and civil society organizations.

However, the country’s government receives little direct assistance from the American government and the the U.S. has previously had sanctions against the country which have been pulled back in recent years.

‘The United States removed sanctions on Burma over the past decade based on progress toward democracy,’ Biden said in a statement on Monday, using another name for Myanmar.

‘The reversal of that progress will necessitate an immediate review of our sanction laws and authorities, followed by appropriate action.’

The Trump administration imposed sanctions against Min Aung Hlaing and blocked him from entering the United States for his role in alleged human rights abuses, CNN reported.

‘The military’s seizure of power in Burma, the detention of Aung San Suu Kyi and other civilian officials, and the declaration of a national state of emergency are a direct assault on the country’s transition to democracy and the rule of law,’ Biden said in his statement. 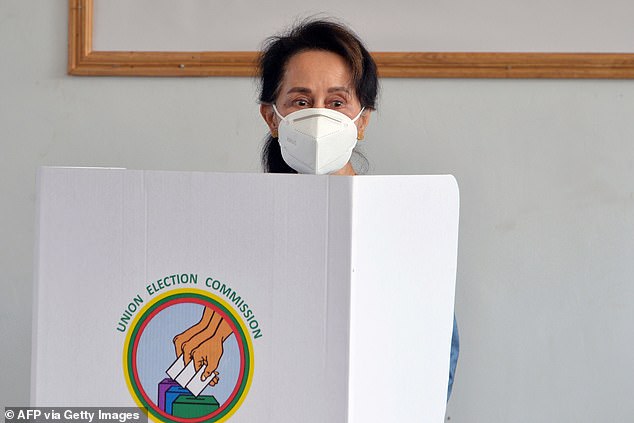 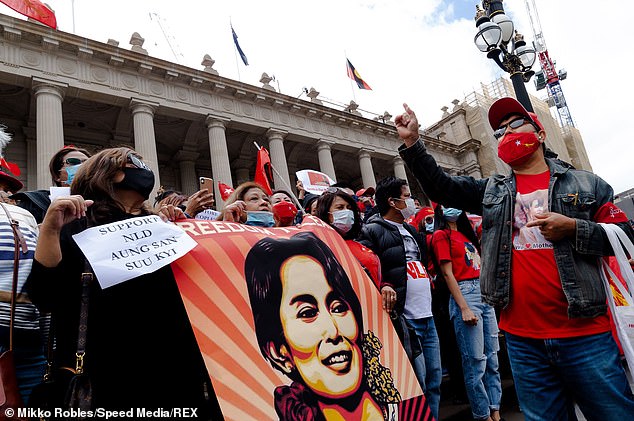 A demonstrator chants as the Burmese community stage a protest rally in front of The Parliament of Victoria in Melbourne, Australia 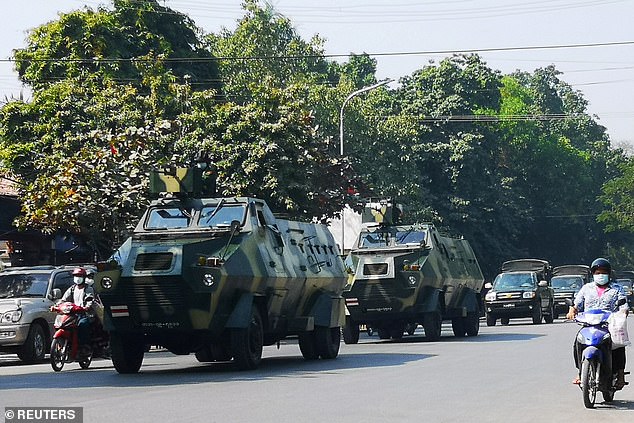 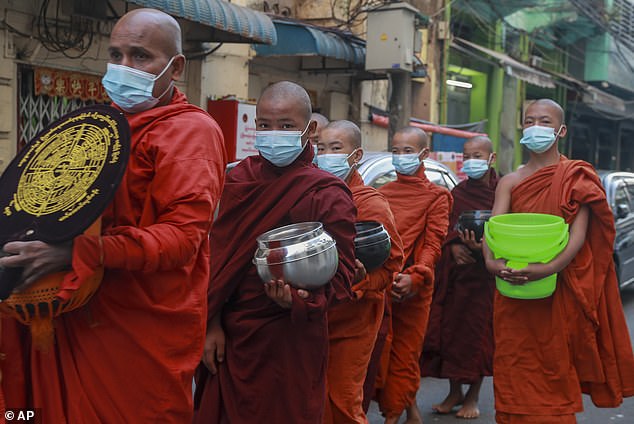 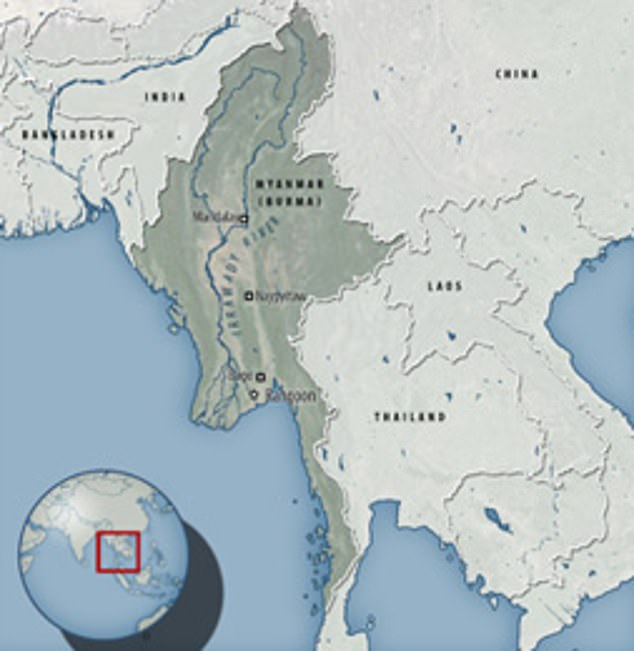 Myanmar’s (pictured) army took power of the country early on Monday and declared a state of emergency after detaining de facto leader Aung San Suu Kyi along with members of her party.

‘In a democracy, force should never seek to overrule the will of the people or attempt to erase the outcome of a credible election. For almost a decade, the people of Burma have been steadily working to establish elections, civilian governance, and the peaceful transfer of power. That progress should be respected.’

Greg Poling and Simon Hudes at Washington’s Center for Strategic and International Studies told Al Jazeera that the Biden administration would almost certainly impose new sanctions against those involved in the coup.

‘But that is unlikely to have much immediate impact on the generals,’ they said.

The U.S. is coordinating a response to the takeover with senior European officials, a source told Politico. The United Nations Security Council is expected to discuss Myanmar in a session Tuesday.

Experts expect China to hinder any serious actions other countries may want to take in the wake of the coup and coordination between the U.S. and its allies in Europe and Asia could pressure  Myanmar’s generals into  a peaceful transition if China stands by the military leadership.

‘The Biden administration must take a strong stand and our partners and all democracies around the world should follow suit in condemning this authoritarian assault on democracy,’ McConnell said.

‘We need to support the people of Burma in their journey toward democracy and impose costs on those who stand in their way.’