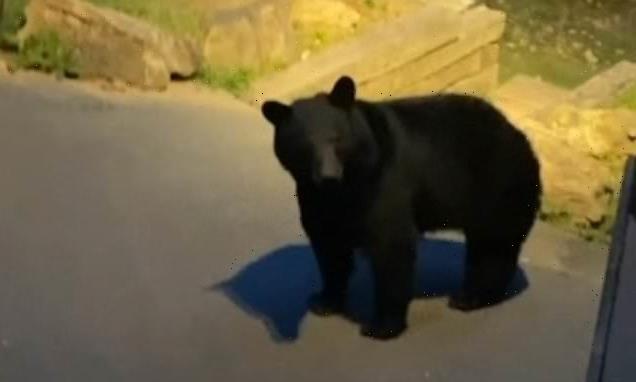 Airbnbear! Terrifying moment growling bear charges towards vacationer when he greets it with a cheery ‘hey’ outside Tennessee cabin

A vacationer was forced to run to safety inside his cabin after he was charged at by a growling bear.

Footage captured in Sevierville, Tennessee, shows the man step outside his Airbnb cabin to investigate a ‘banging noise’ at around 5am on May 20.

After spotting a black bear, the vacationer decides to greet the animal with a friendly: ‘Hey, Mr Bear!’ 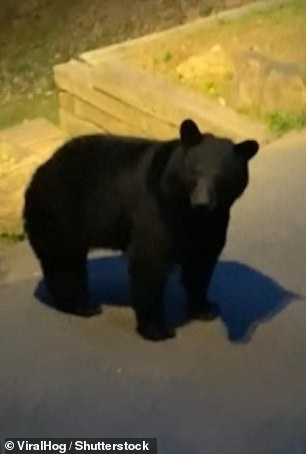 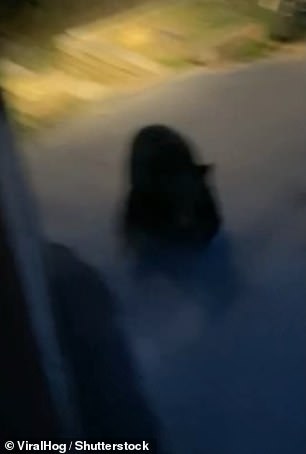 The black bear walks outside the Airbnb cabin in Sevierville, Tennesse, at around 5am on May 20. The vacationer decides to greet the bear but within seconds the animal charges at him

However just moments later the man is forced run inside his cabin as the bear furiously charges at him.

During the clip, the bear stares at the man before running at him and growling loudly.

Once back inside the cabin, the vacationer continues to film the bear as it searches through the garbage.

The bear eventually slowly heads away from the cabin and walks towards woodland in the distance.

The later discovered that ‘Mr Bear’ was in fact a female with three cubs.

A witness inside the cabin told Viral Hog: ‘It was 5am and Kevin heard a banging noise coming from outside our Airbnb cabin in Sevierville.

‘He jumped up and looked outside to see something near our garbage right outside his window.

‘He pulled out his camera to catch it for the family just in case we didn’t wake up in time to see the bear ourselves.

‘He slowly walked out and was face-to-face with the bear. He greeted it excitedly with, ”Hey Mr Bear” and the bear charged and he ran inside as fast as he could.’

The resident added: ‘The bear eventually left our trash alone and perched on the hill just over our driveway. We noticed Mr Bear is actually mama bear and she has three tiny cubs with her! 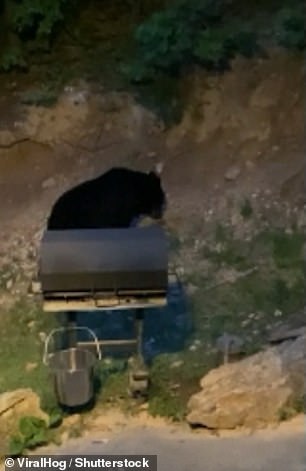 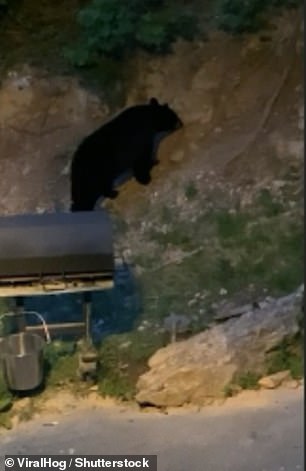 The lone bear slowly walks away from the property and heads towards the woodland area. It later turned out that ‘Mr Bear’ was in fact a female with three cubs

‘We had a deck higher up so we gathered up high to watch an amazing moment between a mama bear and her cubs!’

Black bears are solitary creatures that typically live in forests but can also be found in mountains and swamps across North America, Canada and Mexico.

They have small rounded ears, fur that can vary from blue-gray, blue-black, brown, cinnamon, or even on rare occasions white, and short non-retractable claws which aid them in climbing trees.

The creatures will spend the winter months dormant in their dens and will feed on the body fat they have built up over the summer and autumn months.