Sole traders say the Victorian government's newest relief payments are insufficient to carry them through the paralysing and lengthy lockdown.

The $100 million sole trader support fund announced on Monday, which the state government says will provide grants of up to $3000 to about 30,000 sole traders out of the total of approximately 400,000, is only available to those who operate from commercial premises or a location leased by the trader. The criteria appears to exclude mobile sole traders including outdoor personal trainers, tutors and tradespeople. 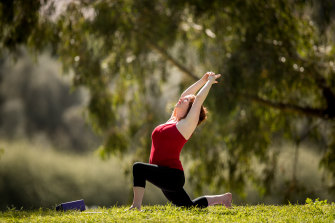 The funding drew a backlash from some sole traders, including Teresa Batten, a yoga instructor from Parkville who said the new package was no help to her.

Ms Batten urged the federal government not to cut the amount of the JobKeeper and JobSeeker wage supplements. She conducts classes for community groups including seniors and neighbourhood homes but hasn't taught a class since March.

"It's a very narrow definition of what someone's business might be," she said.

"It's extremely short-sighted and exclusionary."

"Many personal trainers, gardeners, coffee van operators, mobile pet groomers and electricians will get nothing," he said in a statement.

"Sole traders are on their knees with the Andrews Labor government's strict lockdowns forcing many to stop operating and without state government assistance."

The peak retailers association says grants and tax deferrals announced on Sunday will not prevent an "avalanche" of closures and many sole traders – those who do not operate out of bricks and mortar premises – are ineligible for the $3000 grants.

Paul Zahra, the chief executive of the Australian Retailers Association, welcomed the $3 billion business relief package but said those grants, worth between $10,000 and $30,000 depending on the firm's payroll, would not be sufficient in many cases.

While small retailers would be well supported, Mr Zahra warned that many medium to large retailers would still suffer, especially as many will be unable to access the revised JobKeeper scheme at the end of the month.

"Grants of $10,000 to $20,000 only represent a tiny percentage of the losses retailers are now carrying," Mr Zahra said, adding there could be an "avalanche" of business closures.

The retail industry group estimates the current lockdown will cause the permanent loss of 50 per cent of Victoria's small retailers and is calling on the state government to bring forward its reopening dates for low-risk retailers and reassess its case-load targets for reopening.

The package will provide minimal benefit for Mark Mezrani, who operates national toy retailer Kidstuff. The company has 14 stores in metropolitan Melbourne and derives about 35 per cent of its revenue in Victoria.

The retailer is eligible for a $20,000 grant under the new package, however, Mr Mezrani said this amount was "nothing" compared with the broader losses weathered by the business since March.

"JobKeeper is about to come down a bit and landlords are getting more and more narky," Mr Mezrani said. "It's looking pretty ugly to me."

Mr Mezrani would have preferred the government offer a discount on payroll tax rather than a postponement until 2021, saying deferrals were "probably the worst thing you can get".

"It's just hanging over your head, so if there's a downturn again you're just building debt on debt," he said.

Nic Bolto, 52, opened a premium bed and breakfast in Buxton, near Eildon, in July. He was forced to close the business, which cost about $2 million, within a week of its opening due to public health restrictions.

Mr Bolto had planned to open on Monday when the state was set to come out of stage four rules before the state government revised reopening dates.

"We've had to push more cancellations," he said.

The business has been losing about $15,000 a month for what will be four months by the time the regional accommodation sector is likely to resume. The business will likely be eligible for a $10,000 grant.

"Nothing beats cash, but more would be better," he said.

Our weekly newsletter will deliver expert analysis of the race to the White House from our US correspondent Matthew Knott. Sign up for The Sydney Morning Herald‘s newsletter here, The Age‘s here, Brisbane Times‘ here and WAtoday‘s here.

Has economy de-linked from coronavirus?