Greece has reported its first novel coronavirus infection in one of its overcrowded asylum seeker camps.

A 35-year-old man from Yemen living at the camp of Vial on the island of Chios tested positive late on Wednesday, a migration ministry official said on Thursday.

‘The man has been quarantined at the local hospital. Another 30 people are undergoing tests,’ the official said. 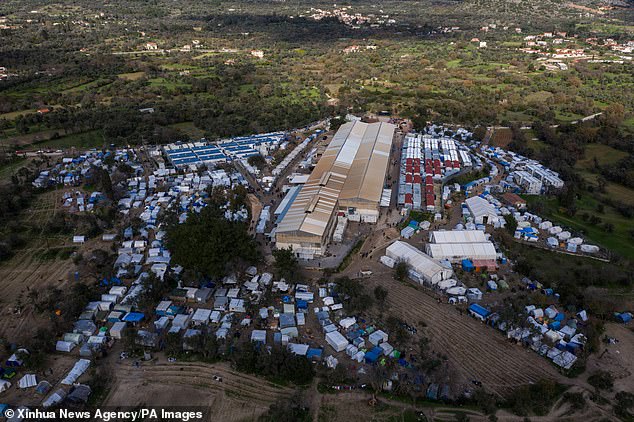 Greece has reported its first novel coronavirus infection in one of its overcrowded asylum seeker camps. Above, a view of the Vial refugee camp on the Greek island of Chios (File image)

There are over 3,800 people living inside the Vial camp, over three times its nominal capacity.

Several non-fatal coronavirus cases have surfaced in Greek camps on the mainland – including 150 infections at a migrant hotel in the Peloponnese in April.

But this is the first case involving an island camp, where the worst overcrowding occurs.

Camps on the islands are nominally under lockdown until August 31, with access severely restricted.

Rights groups including the UN refugee agency had repeatedly urged Greece to reduce congestion at the camps, where there is poor hygiene and social distancing is impossible to enforce.

Earlier this week, nearly 20 asylum seekers tested positive shortly after landing at the island of Lesbos, and were quarantined for two weeks. 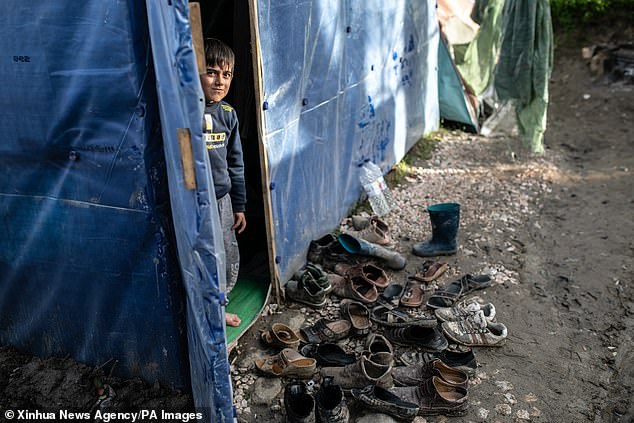 Camps on the islands are nominally under lockdown until August 31, with access severely restricted. Above, a boy pictured inside his tent at the Vial refugee camp last year (File image)

On Lesbos, medical charity Doctors Without Borders (MSF) last month said it had been forced to shut down a coronavirus isolation centre serving the local camp over a planning dispute.

The group in June had criticised the camp lockdown, which has been repeatedly renewed since March, as ‘discriminatory’ and ‘counter-productive’.

‘The extension of movement restrictions imposed on asylum seekers who are living in the Greek reception centres will further reduce their already limited access to basic services and medical care,’ the group’s field coordinator on Lesbos, Marco Sandrone, said in a statement.

The Greek migration ministry has ferried hundreds of asylum-seekers to the mainland in past months, while others have been granted refugee status and allowed to travel off the islands.

The news from Vial came a day after Greece registered its highest-ever daily number of new infections at 262. 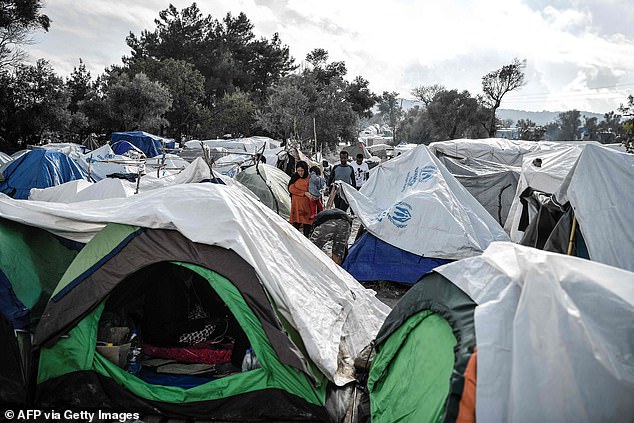 There are over 3,800 people living inside the Vial camp, over three times its nominal capacity (File image of Vial refugee camp)

Authorities have blamed the spike in infections to the flouting of social distancing rules in restaurants, bars and public gatherings.

The civil protection agency has made masks compulsory in all indoor public areas.

The government this week announced a night curfew for restaurants and bars in some of its top tourist destinations, and new restrictions for incoming travellers required to furnish negative tests up to 72 hours before entry.

The government has ruled out a general lockdown after gradually reopening the economy in May and starting to accept foreign arrivals in June to salvage part of the tourism season which is vital to the economy.