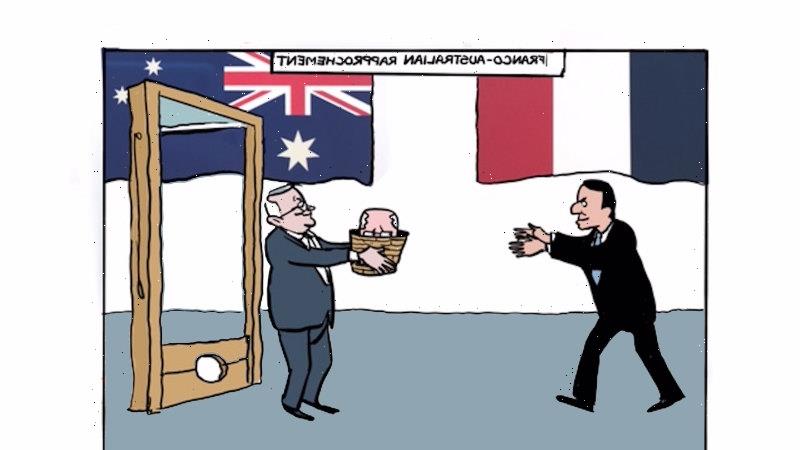 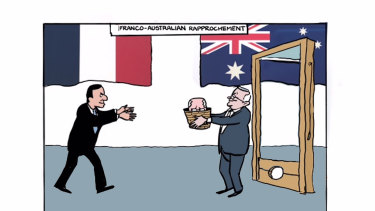 Today’s media has normalised ultraviolence and turbocharged gun culture. America idolises individualism – with the gun as the go-to solution for the loner seeking “justice” against a chosen “enemy”. In 2020, there were more than 45,000 firearm deaths in the US, so are mass shootings really out of the ordinary? Gun culture is so embedded, so aggressively defended, that if legislation was ever passed, there’d be another civil war.
John Laurie, Riddells Creek

This is not what ‘Founding Fathers’ meant
Of the 10 amendments to the US Constitution that make up the Bill of Rights, it is inconceivable that the ″⁣Founding Fathers″⁣ would approve of the way that the Republican Party and the gun lobby in the US have abused the Second Amendment for their own political advantage. No reading of ″⁣the right to bear arms″⁣ by anyone with an ounce of moral fibre can justify the almost daily mass shooting horrors in the name of ″⁣liberty″⁣. It’s the continued proliferation of guns and ease of access that lies at the toxic heart of the issue, not the excuse of mental illness as proffered by cowardly Republicans and the gun lobby. Gun reform must become a bipartisan issue in the US.
Nick Toovey, Beaumaris

The problem is in the nation’s core
Texas governor greg Abbott says there is no gun problem, it’s a mental health problem. He’s right. Any nation that, mass shooting after mass shooting, continues to cling tenaciously to a “right to keep and bear arms” which allows practically anyone to buy multiple, military-grade, assault weapons, definitely has a mental health problem.
Deborah Morrison, Malvern East

The door to unbelievable logic
Unbelievable. Texan senator Ted Cruz’s solution is that each school has only one entrance guarded by heavily armed security. The tragic irony is watching him, and others like him, standing hand on heart singing ″⁣God bless America the land of the free!″⁣
Marilyn Brown, Point Lonsdale

The insanity at work to stop shootings
The Republican plan to stop school shootings in the US is to turn schools into fortresses so 18-year-olds can continue to buy weapons of war unfettered. Insanity.
Pete Sands, Monbulk

Beefing up security is immediate answer
The most immediate solution to stop schoolchildren being shot in schools in the US is for their schools to beef up security. It will be costly with infrastructure changes and security personnel but a cost that doesn’t compare to the slaughter of innocent children.
Larry Hermann, South Yarra

VCE anguish
After two years of disrupted learning and extended remote schooling, the dire shortage of teachers and prolonged pattern of absences is making an already difficult year immeasurably worse for this year’s VCE students.
We are almost at the end of the semester and my daughter has as many as five classes cancelled week after week. No teacher, no substitute, and we are told that students must just do ″⁣self-directed learning″⁣. So they are meant to teach themselves.
I know this is an impossible situation for the schools and the entire system when there are severe teacher shortages and so many absences due to sickness. Expectations and assessments were modified for the 2020 year 12s, and there was special consideration for the 2021 class, but the situation is compounded and even worse for this year’s cohort. Sure, the schools are open and students are there, but the gaps are almost worse now.
We need a response from the Education Department as to how these students will have their assessment modified this year. Students are stressed out, sad and worried and some supportive response from the system would make a huge difference.
Sara Webb, Thornbury

Horse sanctuary
It seems Racing Victoria has pots of money to splash on land three times the size of Flemington racecourse for its ″⁣Project X″⁣ development (″⁣Racing plans new hub with land purchase″⁣, 27/5). To improve its horse welfare image, a better use of the land would be a horse sanctuary – called ″⁣Project C″⁣ for compassion – for all the racehorses injured and maimed on the track and as an alternative for those unfortunates who are sent to knackeries because they can’t run fast enough.
Charles Davis, Hawthorn

Demise is their Joyce …
Most Australians will welcome a new leader of the National Party, especially if that leader pushes climate policy forward (“Nationals leadership spill is yet another battle in climate wars”, 26/5). Should Barnaby Joyce remain at the helm, the disparity between the Nationals’ laggard stance, and their constituents’ desire to tackle climate change, could well lead to the party’s demise. The election result has provided social licence for our nation to prioritise our environment. Now is the time for Australia to end ″⁣the climate wars″⁣, achieve full support for net zero by 2050, and ramp up our 2030 targets. Let’s get on with it.
Amy Hiller, Kew

… Or perhaps not
Despite the Nationals retaining all their seats and gaining an extra senator, left-wing Nationals MP Darren Chester now intends to challenge Barnaby Joyce for the Nationals leadership because Mr Chester thinks Joyce is to blame for the Liberals losing wealthy inner-city electorates to the ″⁣teal″⁣ independents. This amounts to pitching for the party leadership with a vision of turning the Nationals into a wholly owned subsidiary of the Liberal Party, more interested in appeasing the woke of Wentworth. That is a recipe for political oblivion because, as John Anderson and Mark Vaile learnt in the 2000s, product differentiation from the Liberal Party is key to the Nationals’ survival.
If the Nationals know what’s good for them, they will keep Barnaby as leader.
Matt Tudor, Morwell

Libs might peter out
Both the editorial and cartoonist Cathy Wilcox (27/5) have shone the light on the traits of Peter Dutton, and what we see does not augur well for the Liberal Party. It will take two terms for the Liberals to decide to change leaders and again become competitive at elections.
Alan Inchley, Frankston

Disappointing action
It was very disappointing to read that legal action has forced the Melbourne University Student Union to rescind a motion that called for an academic boycott of Israeli institutions and academics ″⁣that support the oppression of Palestinians″⁣ (27/5). What we need now is more political debate not less, especially among educated, young people. And we should not allow accusations such as ″⁣anti-Semitic propaganda″⁣ and ″⁣unsafe and vilified″⁣ to detract from the fact that this motion was about the treatment of Palestinians by the state of Israel, not an attack on the culture and religion of Jewish people.
Judith Crotty, Dandenong North

Frydenberg legacy
It seems to be generally accepted by the Liberal Party and certain scribes that Josh Frydenberg was the most talented and capable member of the Coalition government. As former treasurer he has bequeathed the largest budget deficit in history and the highest inflation rate in 24 years to the Labor Party. He also had the political acumen to fully back Scott Morrison. Doesn’t really say a lot about those who remain and now find themselves in opposition.
Phil Alexander, Eltham

Let’s talk with China
It is time for the new government to reset the relationship with China, whose offer to talk is a small olive branch we should accept; its declaration of no desire for a military base in the Solomons should be taken at face value. We can maintain a proud independent Australian position and negotiate with China to mend the relationship to our mutual benefit. Much better than continuing in the old way.
Bernie Chandler, Donvale

Electors not consumers
By equating electors with consumers in search of products, Dave Sharma (26/5) reveals a main limitation of the Liberal Party mindset. The concept ″⁣consumer″⁣ is about a specific transaction between a person and a product for sale. The word “people” conjures up such a wide range of diversity – life experience, age, gender, cultural background, education, geographic location, personal fulfilment opportunities, and most importantly, inalienable universal human rights wherever we are.
As the devastating outcomes of climate change show us, at a profound level people are organically interconnected to everything. When a political party views its policies as merely products they need to sell to a sufficient number of consumers for them to be re-elected, a decent caring democratic society can easily disintegrate into an autocracy run by entitled elites, and a hugely diminished standard of living for all.
Jennifer Gerrand, Carlton North

No sense to destruction
The Victorian Agricultural Minister Mary-Anne Thomas is determined to increase deforestation by threatening in a proposed bill to jail people who want to preserve what’s left of our native forests by entering a logging site. In a world where forests are being depleted at an alarming rate, it surely makes no sense to participate in this destruction. Trees apart from providing homes for creatures also are important in reducing global warming.
Don Owen, Hawthorn

Dutton’s carp diem
Clearly Peter Dutton still believes in magic pudding economics. He predicts ″⁣higher interest rates, cost of living, inflation and electricity prices” under Labor. Which of these is controlled by federal government? How would he reduce them if he was still in government? The negative carping has already begun.
Raymond Snyder, St Kilda West

Pardon me, what?
On a stop in Chattanooga we decided to dine in the family restaurant next to our motel. I asked for the drinks menu but was politely told it was a family restaurant so they didn’t serve alcohol. I looked across at the next table and the elderly gentleman had a pistol in a holster strapped to him. On that road trip through the south we were regularly confronted with the bizarre sights of guns being openly carried.
Anne Maki, Alphington

Peter Dutton walked out on the apology to the stolen generation. It was a character-defining moment that no amount of recasting as caring and compassionate can change.
Susan Ball, Carlton North

I think I’ve heard more from our current foreign affairs minister in one day than I’d heard from her predecessor in 2 years.
Tim Douglas, Blairgowrie

Guns
Driving through Nebraska several years ago, I noted a large billboard advertising memberships in a new gym. The bonus offer included a “free hand gun to all members over 18”. Only in America.
Joyce Butcher, Williamstown

We don’t have maternity beds for new mothers in public hospitals (The Age, 27/5) but we can give the rich an $18 billion tax cut. Where are our priorities?
Jeff Moran, Bacchus Marsh