The NSW Treasurer this week announced a major reform of that state's tax system: the
replacement of stamp duties on property transfers with a new land tax. While
feedback from community consultation may change details, the proposed opt-in system ticks many boxes.

First, a highly distortionary tax that is responsible for more than a quarter of NSW tax revenue is replaced with an efficient, stable long-term revenue stream. Second, the proposal addresses the concerns of asset-rich but income-poor home owners, who will only begin to pay the new land tax when they purchase a new or existing property, and only if they choose not to pay the property transfer duty. 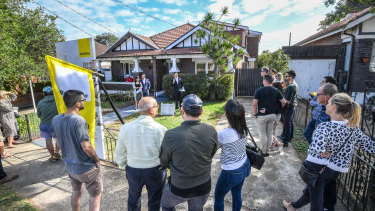 Upgraders are paying stamp duty of $100,000 in Sydney and Melbourne.Credit:Peter Rae

There are compelling reasons to believe a similar proposal would sit comfortably alongside other economic stimulus measures to be announced by the Andrews government as part of next week's Victorian budget.

Why is property transfer duty widely regarded as public enemy number one when it comes to
Australian state taxes? Firstly, moving house is a lot of trouble. There’s decluttering, packing
and unpacking, the compulsion to refurnish and redecorate, and many families must also
navigate school transitions.

The choice to purchase a property also sets in motion a chain of other economic transactions: we contract legal experts to navigate the transfer process, real estate agents to manage the sale of the property, and property inspectors to check for structural defects. All this makes moving house off-putting to a degree. 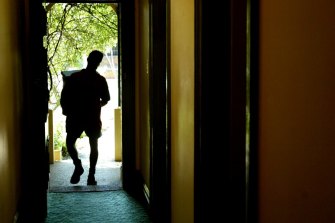 The effort needed and costs involved in moving house is compounded by large transfer fees.Credit:Steven Siewert

Because economic agents such as households are sensitive to price signals, stamp duty significantly reduces our propensity to relocate to a more suitable house when faced with changes in personal or professional circumstance. The tax system therefore incentivises households to wear the cost of congestion and a long commute (and impose those costs on others). The cost of this tax is therefore significant, and so too then is the dividend from transfer duty reform.

Can these kinds of effects be quantified? To answer this, economists at Victoria University’s
Centre of Policy Studies analysed the economic impacts of the ACT Tax Reform Package.

This package began in 2012, and a key element of it involved the phasing out of
property transfer duty in the ACT over a 20-year time horizon, with the revenue replaced by
an increase in ACT general rates. This system in the ACT acts in a similar
way to local council rates in NSW.

Each year, the general rates revenue target is achieved by calculating the value of land parcels in the territory. Households then pay a share of the annual target, which is proportional to the value of their residential land plot relative to the value of the total land stock in the ACT.

Land taxes of this kind are attractive because taxation of foreign landowners means that each dollar of land tax raised costs the economy less than $1. That is, land taxes carry an economic benefit.

Based on what we’ve seen from the ACT’s experience, the economic dividend of replacing
transfer duty with a land tax is compelling.

Rather than damping the enthusiasm for generational change in the way state governments finance their economic activity, COVID-19 has reinforced the political appetite for reform, as the NSW proposal demonstrates. The policy package put forward by NSW appears to strike a balance between efficiency and feasibility, but this comes at a cost: for each transaction opting into the new system, tax revenue from that transaction will fall because the land tax paid in the year a property is transacted will be much less than the stamp duty that would otherwise have been raised.

With interest rates at historic lows, the servicing costs on the resulting public deficits are expected to remain low for many years to come. Getting Victorians moving house could play an
important role in getting the state's economy moving once again.

Jason Nassios is a senior research fellow at the Centre of Policy Studies, Victoria University