A family of firsts: Kamala Harris’ husband Doug Emhoff will be the first-ever second gentleman 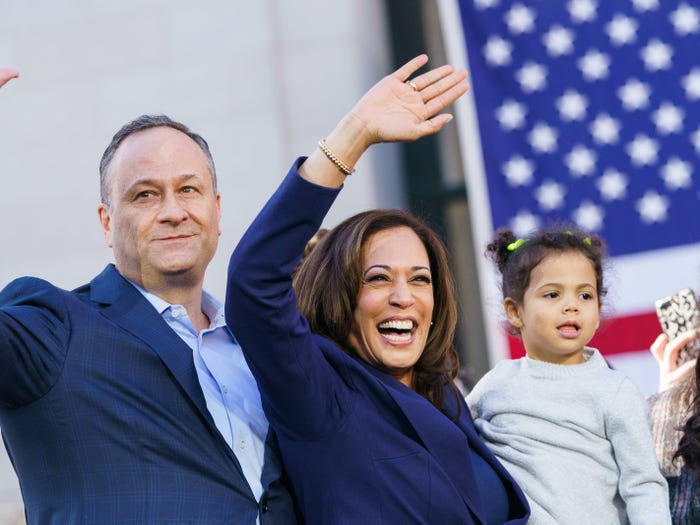 That victory means that Emhoff will become the first male spouse of a vice president.

Emhoff, who is an entertainment lawyer, has played an active role throughout the Harris' campaign.

Who is Doug Emhoff?

After finishing law school in 1990 at the University of Southern California's Gould School of Law, Emhoff became an entertainment lawyer.

Since graduating, he has worked on major cases, like the Taco Bell chihuahua lawsuit.

Emhoff is a partner at DLA Piper and works in business, real estate, and intellectual property law.

In August, he took a leave of absence from his legal firm and has played an active role in Harris' campaign since.

Now that he's set to be the first gentleman, Emhoff plans to focus on "access to justice" when he's the second gentleman, according to USA Today.

How Harris and Emhoff's relationship began

Emhoff met Harris on a blind date planned by one of Harris' friends. The two quickly clicked.

"The morning after our first date, @DouglasEmhoff emailed me a list of his available dates for the next couple of months," Harris wrote on Instagram on Emhoff's birthday in 2020. "He said, 'I want to see if we can make this work.' We've been making it work ever since."

Less than a year later, Emhoff had proposed, and in 2014, the couple was married in a courthouse in Santa Barbara, California.

Emhoff had a former marriage with film producer Kerstin Emhoff. In that marriage, he had two children, Cole, 26, and Ella, 21.

Harris has a positive relationship with both of the children, who refer to Harris as "Momala" instead of stepmom.

According to The Wall Street Journal, the couple owns homes in Los Angeles, San Francisco, and Washington, DC.

From senate races to presidential races, Emhoff has been by Harris' side. He has played an active role in Harris' campaign for the vice presidency by joining the campaign trail and leading fundraisers.

On Saturday, Emhoff tweeted a photo of him hugging Harris to celebrate the victory

Emhoff celebrated Harris' win by tweeting out a photo of him hugging Harris. The photo's caption read, "So proud of you."

The post went viral as people took to the streets to celebrate Harris and Biden's win.

In January, Harris will be sworn into office, thus giving Emhoff his title as the first-ever second gentleman.

White House officials were aware of chief of staff Mark Meadows' COVID-19 diagnosis earlier this week, despite him being seen without a mask
Technology