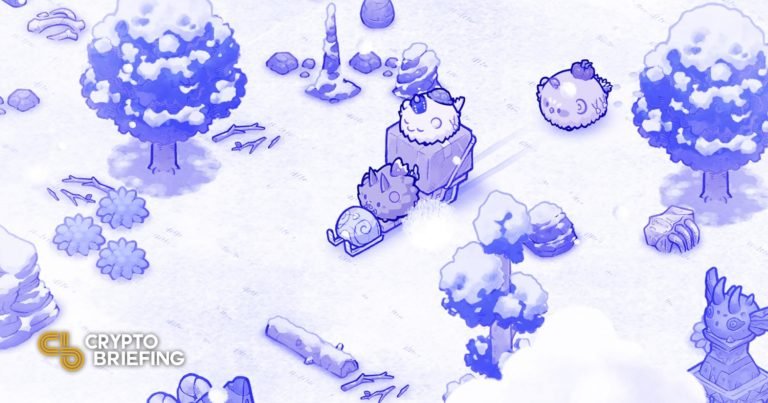 What is Causing Axie Infinity’s Boom in Popularity?

Axie Infinity has experienced a rapid rise in recent weeks, with the game’s native token AXS surging 469% this month. However, the boom may be the start of a larger trend for the game.

To say the Axie Infinity economy is booming is becoming somewhat of an understatement.

Just one week into July, Axie Infinity surpassed the $12 million in revenue the game made in the entire month of June. According to data from Token Terminal, the game has earned $102 million in revenue over the last 30 days, which is higher than every DeFi protocol combined.

Additionally, the AXS token, which plays an integral role in the game’s economy, has skyrocketed. The token began July trading at $5.66 and has risen around 469%, hitting a record high of $32.19. Aside from its use in-game, AXS token holders receive a portion of the revenue the protocol generates, making AXS an even more lucrative investment.

The story doesn’t end there, as Axies, the cute NFT creatures needed to play the game, are also soaring in value. On the game’s marketplace, rare Mystic Axies sell for upwards of $56,000, outpacing the current floor price of around $42,000 for NFT progenitor CryptoPunks. Prices for plots of virtual land and ultra-rare Axies are also increasing. On Jul. 4, one of only 19 Triple-mystic Axies sold for an eye-watering $820,000. Even the prices for the cheapest Axies have risen, with a set of three needed to play the game now averaging $1,300. Back In June, the same Axies cost less than half the current price.

One of the biggest catalysts for Axie Infinity’s growth was migrating the game from Ethereum mainnet to an Ethereum-linked sidechain.

Known as “Ronin,” the sidechain is made specifically for Axie Infinity and handles all in-game and marketplace transactions of Axies, land, and items. Launching a dedicated sidechain has drastically reduced gas fees and improved transaction speeds. Additionally, Ronin has simplified the onboarding process for new players, allowing those with little experience using blockchains to start playing.

While the Ronin sidechain has helped improve Axie Infinity’s in-game experience, attracting players who were not already interested in blockchain technology has also been key to the game’s growth. Axie Infinity works on a “play-to-earn” model, where players are rewarded with the SLP (“Smooth Love Potion”) token for the time and effort spent playing the game and growing the ecosystem. The model has been particularly effective in the Phillippines, where the game has exploded in popularity in recent months. Using current SLP prices, playing the game every day can net over $1,200 a month for the average player. While this rate may not be competitive in most western countries, in the Philippines, it amounts to more than five times the minimum wage in some regions. 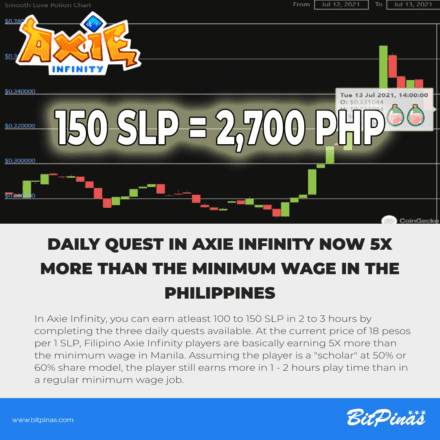 With the ability to earn money through the game, many of Axie Infinity’s new players have come from economically disadvantaged countries. Over 40% of all traffic to axieinfinity.com comes from the Philippines, with a further 6% logging in from Venezuela. Traffic from the U.S sits at just over 5%; however, if the game’s popularity and in-game earnings keep increasing, more U.S players may start playing.

As the amount of money earned playing Axie Infinity increases, so does the number of people who want to start playing. With Axies in high demand, the cost barrier to entry has increased substantially since the game began. While many people in countries like the Philippines want to start playing and earning, few have the $1300 needed to buy a set of three Axies. This is where scholarship programs come into play.

In response to players not being able to afford the Axies needed to play the game, players and guilds have started offering scholarships. An Axie scholarship is where a manager or guild (the scholar) lends out three Axies that a player (student) will use to play the game and earn Small Love Potions (SLP). The amount of SLP earned by the player is split with the manager or guild at a predetermined ratio. With large organizations such as Yield Guild Games benefiting by providing scholarships, the Axie Infinity player base has continuously grown despite the rise in Axie prices.

As of Jul. 5, the daily active user count for Axie Infinity crossed 350,000, with no signs of slowing down. The game still has a lot of growth potential, with an increasing number of players still looking for scholarships. However, the biggest challenge the game will face is attracting more western players. If Axie Infinity can achieve the same level of success in the U.S as it has done in the Philippines, the current trend of exponential growth could last a lot longer.