Uniswap v3 Is the Perfect Market Maker for Venture Capitalists

Uniswap’s key feature increases the gamification of the most popular DEX. But this is a game retail doesn’t have the tools to win.

Everyone’s a Market Maker on Uniswap

After announcements of announcements, the world was finally able to see Uniswap’s plans for its third version. Given that the project’s second version was one of the catalysts for DeFi’s meteoric rise in 2020, the anticipation for this release has been met with similar excitement. Indeed, Uniswap has regularly been at the forefront of innovation, especially for automated market makers (AMMs).

Automated market makers are the cornerstone of decentralized finance. To understand how revolutionary these are, one must first understand market-making functions in traditional finance.

Market makers offer assets at two prices, one for sellers and one for buyers. It profits from the spread between these two numbers. The real business of market makers is not price; it’s volume. The higher the volume, the higher the profit.

Due to the sheer amount of any singular asset needed, only institutions can be market makers in traditional finance. Even popular brokers like Robinhood rely on market makers to provide sufficient liquidity. This allows financial institutions to ever-so-slightly bend the rules of the game, if not directly change them for their own interests or those of their business partners.

Since January, this has been a highly debated topic when retail investors accused Robinhood and market makers of market manipulation.

Being the market maker confers undeniable advantages, and the invention of AMMs in DeFi has been a game-changer. Suddenly, everyone could be the market maker. Any liquidity provided to facilitate trades decreased the ask-bid spread, reduced slippage, and earned fees for the liquidity providers (LPs). The best part was that the liquidity pool is liquidity-agnostic; it doesn’t matter if one LP has invested millions in the pool or just a couple thousand dollars.

LPs are rewarded proportionally to their participation, but no one is excluded from market-making.

By automating the process of market-making, AMMs provided equitable opportunities to all market participants. With v3, however, this has changed dramatically.

This means that Bob’s capital, as it is concentrated in just that range, will be more efficiently used in any trades between these two values.

In essence, if Alice and Bob have the same amount of capital but Bob concentrates his capital in a  certain range around the current price, he will earn more in fees than Alice. The narrower the range at which Bob sets his liquidity, the more he will earn from fees than Alice as long as the price trades in that range. Alice’s strategy will shine if the price leaves that range as she will then earn all of the fees while Bob’s liquidity sits idle.

This also has a very positive effect on slippage, which effectively decreases as more capital is available around the current price rather than idle at both ends of the price curve. This decreases the price impact of any single transaction, so users effectively have a better rate than they would if there was less liquidity close to the current price.

Uniswap argues that in using concentrated liquidity, users can increase their capital efficiency by up to 4,000x when adding liquidity to a 0.10% price range, effectively increasing their fees while necessitating much less capital.

What Uniswap hopes will happen is that different liquidity providers will choose different strategies.

Alice, for example, might concentrate all of her liquidity close to the current price, a highly crowded area but one in which most trades will happen, increasing her share of the pool’s fees.

Bob might provide his liquidity to the entire price range to receive fees on any single trade (albeit much fewer fees), which might pay off if the price is particularly volatile.

Max might think that the price of ETH/DAI will explode in the following days and concentrate all of his liquidity at a higher range. Max hopes that when the price arrives at this higher range, he will be in a prime position to earn more fees from trades in this less crowded range.

In reality, this is not how this will likely play out. To get a better understanding of the dynamics of liquidity provision in Uniswap’s v3, Crypto Briefing spoke with  Nate Hindman and Mark Richardson from the Bancor team, one of Defi’s very first AMM projects.

“There is no advantage to being the early bird. As soon as the price moves, nothing is stopping other participants to change the price range at which they provide liquidity,” said Richardson.

In the above example, Max’s successful prediction of future price movement will not be rewarded. There is no reason to believe that actively managed liquidity will not be moved at the new price dynamically. Alice can easily and dynamically change the price range at which she’s providing liquidity and, as soon as the price reaches the range Max predicted, add her capital on top of Max’s and enjoy the same fees.

She could even provide it in a much narrower range than Max, effectively earning much more fees with a similar amount of capital.

“Uniswap v3 is brilliant, academically speaking,” adds Richardson.“But in practice, the laws of game theory predict that whales will compete to provide liquidity to the narrowest range possible around the current price and dynamically update their liquidity provision range to follow price.”

The only limit to how many times a day users could move their provision range is the gas fees necessary.

Imagine Alice and Bob are competing for the fees from the DAI/USDC pool. In v2, they would receive equal fees for equal capital in the pool. In v3, Alice decides she wants to provide her liquidity between 0.95-1.05 USDC/DAI. As most trades happen in that range, Alice immediately starts to receive more fees while Bob’s “wasted” capital on both extremities of the price range remains unused. Seeing his share of the fees go down, Bob decides to provide capital between 0.99-1.01 USDC/DAI.

In the case of a stablecoin pool, this range does not move, but in a pool between uncorrelated assets, things get trickier.

As soon as market players understand the new rules of Uniswap v3, everything changes. Institutions or larger whales will compete to provide capital in the narrowest range around the current price and use the fastest price oracles to update their positions every block. Smaller LPs would quickly fall behind as they are more hampered by gas prices and do not have the same access to formidable trading bots and price oracles.

This leads to what Richardson calls a race to the bottom. By setting a very small range for their liquidity, users effectively increase the risk of impermanent loss to hazardous levels.

When LPs provide liquidity to the ETH/DAI pair on Uniswap v2, they risk incurring impermanent loss on their stake. When the price of ETH decreases, they end up with more ETH and less DAI than they started with.

When the price of ETH rises, some of it is converted to DAI to keep a 50/50 split. Users may, in that case, make less on fees than they would have done had they just held their ETH. Users concentrating their liquidity to a very narrow range essentially enter a limit order.

If Alice provides liquidity to ETH/DAI in the 1,750-1,800 DAI/ETH range and the price of ETH moons, essentially all of her ETH will be sold to DAI at 1,800. If the ETH price continues to moon, too bad for Alice because she doesn’t hold any.

The other proposition is even more worrisome: Imagine Alice provides funds to the liquidity pool of a small DeFi project (called “RUG” for the sake of example) against ETH. She’s providing from 13-17 RUG/ETH. She began with 15 RUG and 1 ETH. But, hypothetically, a problem comes up in the development, which leads to a devaluation of the RUG token. As soon as the price of RUG drops below 13, Alice will be left only holding RUG. As Uniswap sells Alice’s ETH for RUG, the price continues to drop, causing chain liquidations of users’ concentrated liquidity positions.

Alice is soon left with a bag of worthless RUG and nothing else.

Entities handling huge amounts of capital may fare very well in Uniswap v3, but there may be hardly any rewards for retail investors trying to play the game.

The game favors whales, institutions, and investment funds with three key advantages at their service.

First, very high capital so that the fees associated with the constant on-chain movement of liquidity don’t represent too much of an investment. Second, swift price oracles can pinpoint exactly the price of an asset and the range it’s most likely to stay in until the next block of Ethereum is mined. Third, very advanced AI trading bots with human oversight to accurately predict the direction of price movement to best capture fees.

This is not a game humans alone can win.

Uniswap is the flagship of DeFi. At the time of writing, the DEX has $4.41 million in Total Value Locked (TVL), according to DeFi Pulse. Its native token, UNI, enjoys a total market cap of more than $15 billion. The release of v3, however, didn’t include elements characteristic of DeFi releases, such as community involvement or voting on the proposed changes. 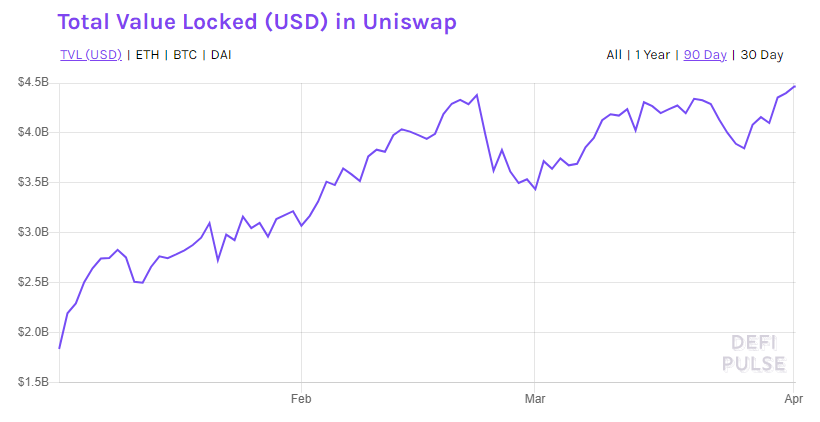 While this did bring a lot of attention to v3, it also showed how centralized the protocol’s governance had become.

The community was never involved in the making of v3. There was no opportunity for anyone to raise any legitimate concerns around the new system. Nor was there a vote among UNI token holders on whether to implement these changes.

Additionally, Uniswap announced no fees would be redistributed to UNI holders but that the fee switch could still, theoretically, be turned on at any moment. This fee switch would distribute part of the protocol’s fees to UNI token holders.

It’s also important to note that Uniswap received major investments from some of the biggest investors in Silicon Valley. Andreessen Horowitz was the lead investor in Uniswap’s Series A, but they’re certainly not the only ones: Union Square Ventures, Paradigm, and many others are all major stakeholders in Uniswap.

These investors represent a sizable part of all UNI tokens and, as such, hold the keys to the governance of one of the most valuable DeFi projects.

If Uniswap were any Silicon Valley startup, judging v3 would be very different. The latest version of Uniswap is extremely capital efficient and, technically speaking, represents incredible innovations in the domain of AMMs.

But it raises an important question that DeFi would always eventually reach.

At what point does progress in the efficiency of protocols outweigh the importance of bottom-up governance, community building, and protecting regular users’ interests?

Uniswap’s v3 business license is the most obvious sign of this change in direction. While anyone can still see the code used by Uniswap, it is now protected by copyright for the next two years. Open-source code has been one reason behind the exponential growth of DeFi, but for Uniswap, this phase is over.

Uniswap Labs was asked for comments on Mar. 26. but has not yet responded to Crypto Briefing.

Disclosure: The author held ETH, DAI, BNT, and a number of other cryptocurrencies at the time of writing.