TechFinancials, a UK-based trading technology provider, has reported a year-on-year revenue loss of 70.5 percent to $0.61 million in the first half of 2020, down from $2.07 million in the similar half of the previous year, the company announced on Wednesday.

The company’s losses for the period stood at $0.55 million, down from $1.09 million in the first half of 2019, primarily as it wrote off $0.75 in investment losses in its two subsidiaries – DragonFinancials Ltd and B.O. TradeFinancials Ltd. 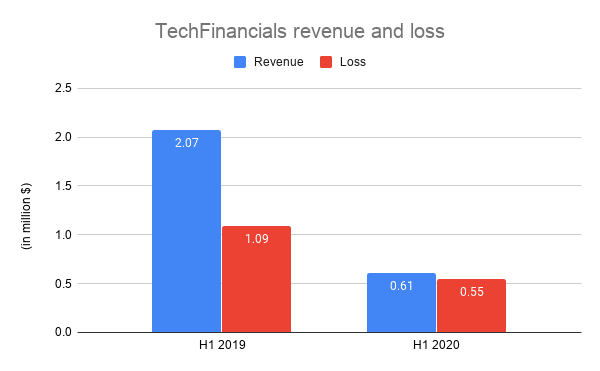 “In the first half of the year, we have gained full control of Footies, following a conversion of a convertible loan in March 2020 and the signing of a separation agreement with Footies partners which led to holdings of 100% of Footies by the Group,” Asaf Lahav, Group CEO of TechFinancials, said.

Can it survive the COVID-19 impact?

He also pointed out the impact of COVID-19 on the business of the company and also on its subsidiaries.

“Footies’ plan to complete the development of its ticketing solution and launching the product in 2020 was put on hold,” he added.

The company is now considering to completely scrap this initiative with the uncertainty in the event market with the ongoing pandemic. Furthermore, it will cease its core software licensing business by the end of this October.

“The Company’s plans to sell all or part of its interest in Cedex to a third party were also slowed down as a result of the new business atmosphere,” Lahav added. “It is still uncertain how long the Covid-19 disruption will continue and what ongoing effect it will have on the remaining business of the Group.”

BNB Staking is Now Available on the Binance Chain Testnet