Finance Magnates has learned that SpotOption is ceasing its FX and contracts for differences (CFDs) business lines. The move comes just six months after the trading software provider shut down its binary options business. The white label solution will not be available after August. 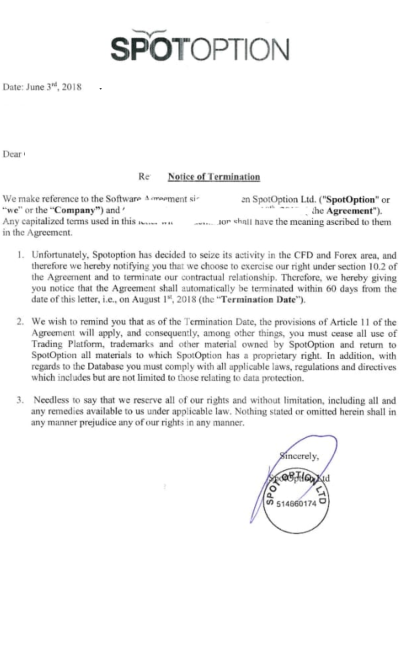 The legislation, which went live in January, was enacted after the Israeli government stated the industry was causing significant damage to the country’s reputation. As a result, SpotOption, which is based in Israel, stopped providing software that supported binary options trading.

The firm may have seen the writing on the wall with regard to the binary options business some time before the Israeli legislation was passed. The firm launched a CFDs trading platform in November of 2016.

A month after Israeli legislation was passed, the firm launched a subsidiary, OTC Book, a liquidity provider for the CFD, FX and cryptocurrency markets. It appears that this division of the business will be shutting down too.

The precise reasons behind SpotOption’s decision to cease its CFD and FX activities remain unclear. It seems possible that it is a result of the European Securities and Markets Authority’s recent clamp down on the retail trading industry.

A large number of firms within the retail industry are closing down or moving offshore as a result of the legislation that bans binary options and puts heavy restrictions on leveraged CFD and FX trading. Whether or not ESMA’s legislation is the key reason for SpotOption stopping its CFD and FX activities is uncertain. However, it is reasonable to think it certainly have had an impact on their business.