MIST, the native token of the MEV protection project Alchemist, has rallied after rumors of a partnership with the decentralized exchange Uniswap circulated online.

Alchemist Rumored To Partner With Uniswap

Alchemist’s native token has rallied on rumors of a new partnership with Uniswap.

According to social media reports, Uniswap may soon be deploying Alchemist’s mistX product, a popular solution for protection against Miner Extractable Value (MEV). MEV is a phenomenon where by reordering transactions in the next on-chain block, miners can front-run trades on Ethereum’s decentralized exchanges (DEXs).

The price rally followed a video posted to Reddit that showed a privately hosted Uniswap v3 interface with a front-running protection feature that read “powered by Flashbots and mistX.”

By serving as an effective solution against MEV, the Alchemist’s mistX product has hit over $311 million in volume traded over the course of five months since it went live in May 2021.

The Uniswap partnership reports coupled with the protocol’s growing use of has driven a strong rally for Alchemist’s MIST token, which is up 68% since Oct. 1 and is currently trading at about $130. 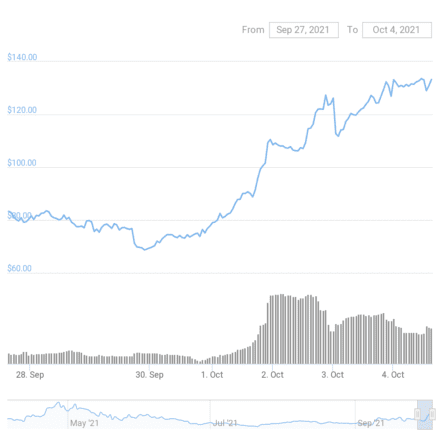 While nothing has been made official as of now, the team at Alchemist and Don Vincenzo, a core team member, have further stoked the rumors surrounding the partnership by hinting that a major announcement is soon to follow.

mistX, one of Alchemist’s flagship products, uses Flashbots technology to protect DEX traders from Miner Extractable Value (MEV). MEV has become a major concern for the Ethereum blockchain, allowing miners to practically “steal” millions of dollars each day. With rising instances of front-running, the need for MEV protection has grown proportionally.

Simply put, mistX works as a layer on top of DEXs and routes transactions through Flashbots, a type of private communication protocol between DEXs and miners that aims to protect against MEV attacks.

If the rumors are true, a partnership with Alchemist could improve trades for Uniswap users, the largest DEX by daily trading volume. As per reports, Uniswap traders are vulnerable to MEV attacks as no solution is currently in place.

Other projects such as Gnosis’ CowSwap and Eden Network have also deployed MEV protection solutions, but with different approaches. For example, another leading DEX, Sushi, has already integrated Eden Network to protect its users from MEV. A partnership with a large DEX like Uniswap could give a further boost to the fees Alchemist generates.

Crypto Exchange KuCoin Launches “Crypto Friday” to Give Away 1,000,000 USDT in Prizes
Technology