According to Vin Armani, the founder of CoinText, CoinGeek and Craig Wright have a sinister plan for Bitcoin Cash ABC and other proof of work public blockchains as Ethereum. He claims that Craig and Calvin plan to launch a 51 percent attack of the Bitcoin Cash ABC network.

Though it would be the “ultimate sacrifice” as it is cost intensive, their main objective is to discourage full nodes from connecting to Bitcoin Cash ABC client.

As if that is not enough on Nov 17, together with their supporters, he revealed plans of stress testing ABC by broadcasting millions of small transactions causing a clog with the intention of keeping the network in complete disarray. Should this be successful, their next target would be Ethereum and other proof of work networks. It’s clear that they are willing to take massive losses as long as there is a massive sell-off and even capitulation of Bitcoin Cash. Should there goal be attained then it won’t be easy for full nodes to migrate to their client which they have full control of.

While this is happening, Ethereum is inching closer towards Serenity as Constantinople hard fork could re-launch its test net on Jan 16, 2019. However, the date is tentative and could be put off depending on if there are hurdles along the way or not. Remember, before the software upgrade is complete network participants should first agree on difficulty bombs and introduction of ASIC resistance capabilities in ProgPow protocol. 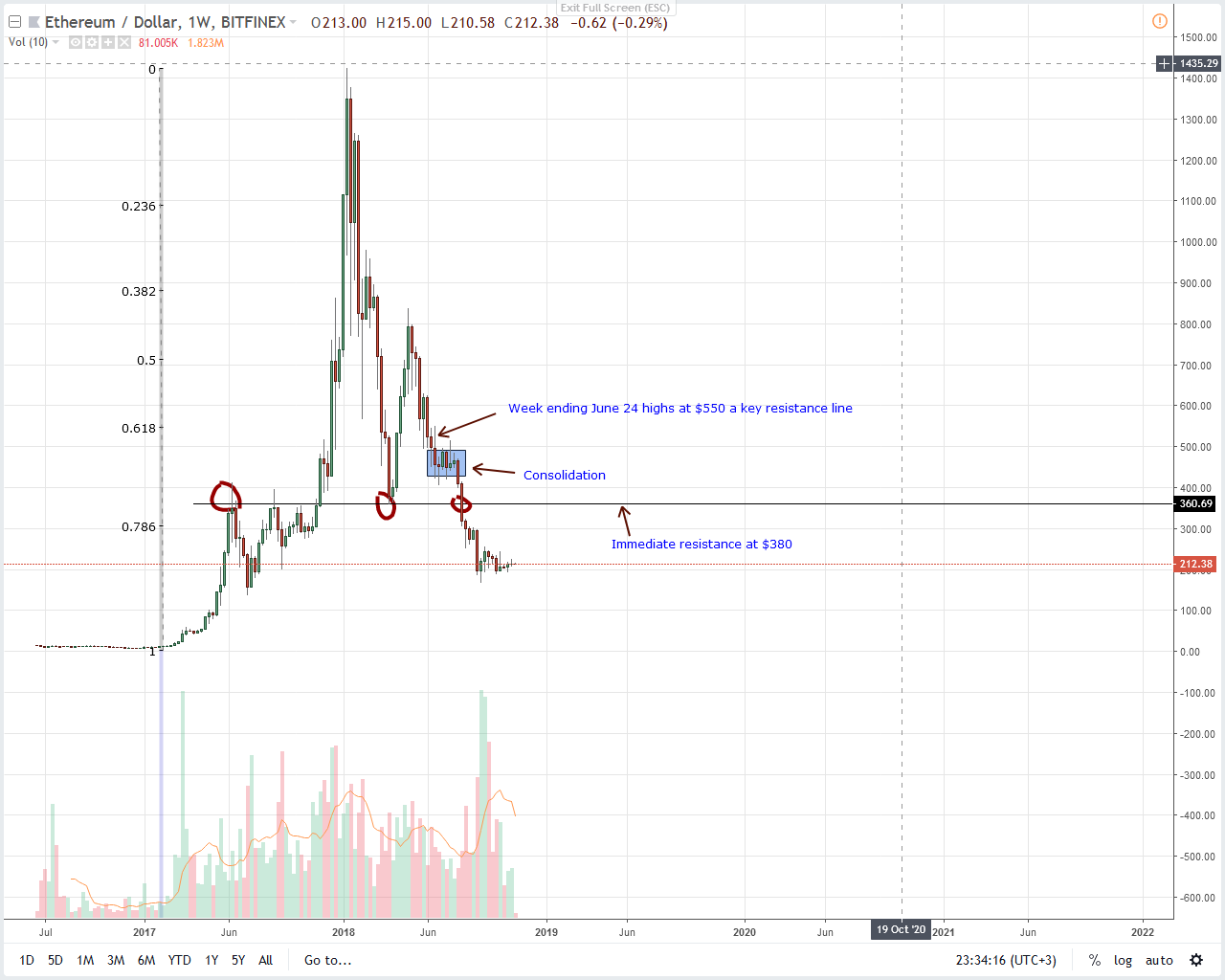 Though grappling against sellers, ETH/USD is in profit making territory and up two percent in the last week. Regardless, it will take a lot of convincing until we recommend taking longs at spot. Like in our last Ethereum trade plan, all we need are strong gains above the resistance zone at $250-$300 or discouraging losses below Sep lows at $160. Either way it shall be a break out pattern but it would be ideal if prices rise above $250 now that it has been 11 months of relentless bear pressure. Currently, it’s clear that ETH/USD is consolidating inside a $30 range with psychological minor support at $200. 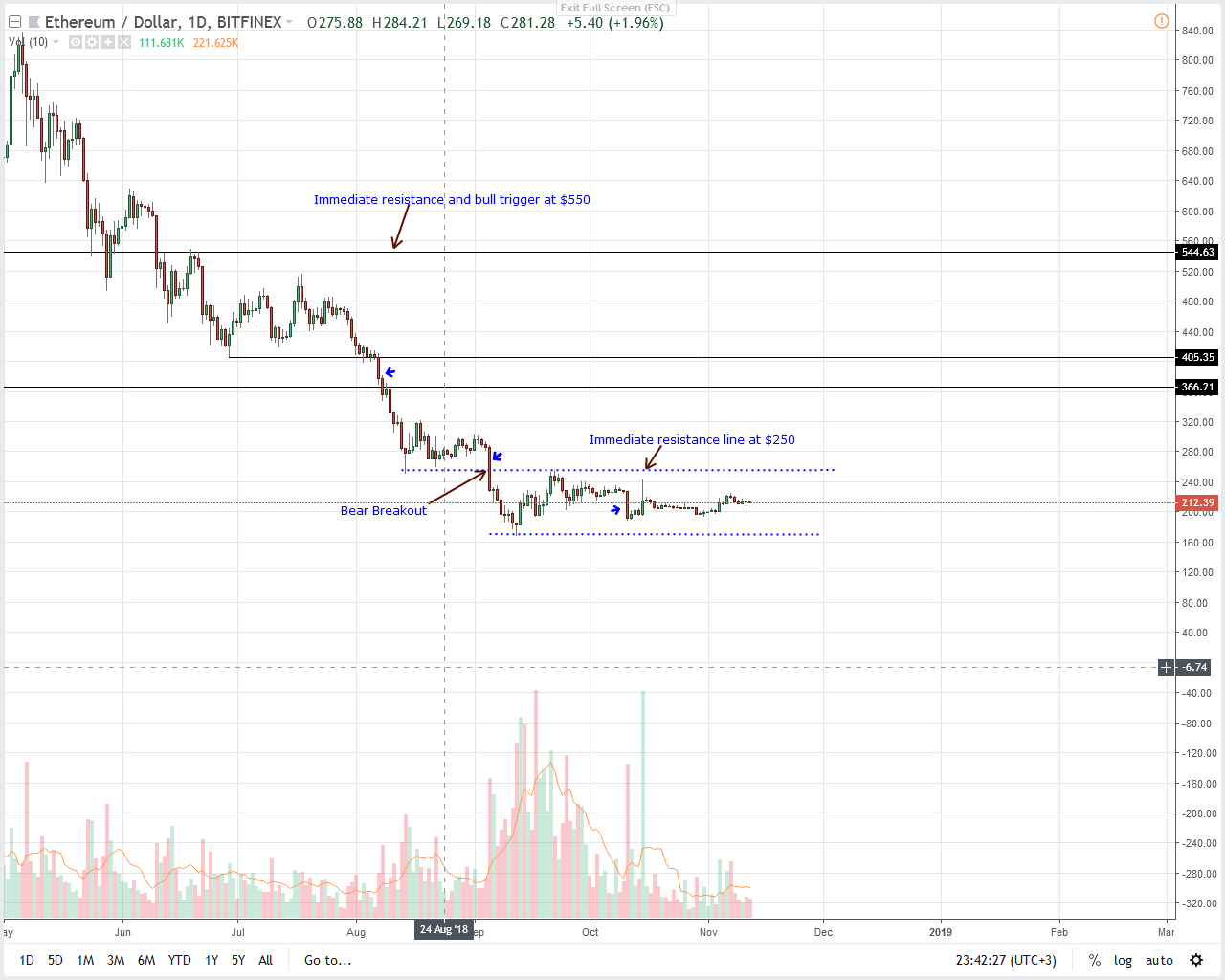 The range mode of the weekly chart is clear in this time frame and so are the reasons for refraining from executing trades. As it is, ETH/USD is moving horizontally as they accumulate but as they do, Sep 5, Oct 11 and 15 bars are a stand out. Nonetheless, considering the dominant trend, we shall focus on Sep 5 lower lows.

As a clear bear break out pattern closing below $300, it appears as if sellers could end up in control more so if bulls fail to build momentum and close above $250.

That would definitely cancel this bullish outlook but confirm the same ushering in another wave of lower lows if there are losses below $160. From candlestick formation, we suggest taking a neutral condition only waiting for fitting break outs with first target either at $300 or at $250.

All Charts Courtesy of Trading View

Disclaimer: Views and opinions expressed are those of the author and aren’t investment advice. Trading of any form involves risk and so do your due diligence before making a trading decision.