Orion Money is aiming to become a cross-chain stablecoin bank based on an innovative suite of DeFi products providing seamless and frictionless access to stablecoin saving, lending, and spending. Its flagship product is Orion Saver, which allows users to access Anchor’s attractive and stable yield on stablecoin deposits across multiple blockchains.

Orion Money is a suite of cross-chain DeFi products providing users with seamless access to some of the highest yield rates on stablecoin deposits on the market.

In order to understand how Orion works, we need to look into Anchor Protocol on Terra. Anchor is a decentralized money market and savings protocol offering a fixed 20% yield on UST deposits. It generates a high stable yield on UST deposits by lending out deposits to borrowers who have secured collateral in yield-bearing assets.

These assets, which Anchor calls “liquid-staked assets” or “bonded assets” (bAssets), represent native staked tokens of Proof-of-Stake-based chains. For example, instead of requiring collateral in Ethereum, Anchor asks borrowers to secure collateral in staked Ethereum on Lido (bEth), which currently yields around 5% APR.

Anchor effectively reallocates the on-chain yield earned from the borrower’s overcollateralized bAssets to depositors. The minimum collateral ratio is set to 2:1, so a user borrowing $1,000 in UST would need to secure $2,000 collateral in bEth or bLuna, which would generate $100 or 10% yield for the lender from a 5% APR. The remaining 10% is covered by the interest borrowers pay on the loans. The rate the borrowers pay fluctuates depending on market conditions.

Anchor’s process for offering a stable 20% interest rate is simple. When it earns more than 20% or the real yield is higher than the Anchor rate, the protocol allocates the excess yield in a UST denominated “yield reserve,” whereas when the real yield is lower than the Anchor rate, the protocol draws down from the reserve to make up for the yield shortfall.

However, Anchor’s attractive and low volatile lending yields are exclusive to UST depositors on the Terra network, which is where Orion comes into play. Orion leverages Anchor to bring the same high stablecoin yield to Ethereum, Polygon, and Binance Smart Chain, amongst others, and to depositors of different stablecoins, including DAI, USDT, USDC, FRAX, and BUSD. Explaining why the project chose to build Orion, co-founder Vol Pigrukh says that it wanted to help a wider user base leverage Anchor. “We wanted to democratize the protocol and bring it to all massive chains and provide access to Anchor’s high stable interest rate to any stablecoin holders on their native blockchains,” he explains.

With Orion, users don’t need to bridge their stablecoins to Terra. Instead, they can deposit to Orion Saver from Ethereum or another supported chain to start earning a fixed yield on their stablecoins.

Vol and Kos Chernysh are the co-founders of Orion. They previously founded the eCommerce analytics startup Profitero before selling the company in April 2020. The pair enrolled in Terra’s first hackathon with three former Profitero employees and developed Orion’s first minimum viable product after two days of coding. They won first place.

Orion Saver Under the Hood

Orion’s current interest rates on stablecoin deposits are lower than the 20% target. For example, Orion is paying 16.5% APY on UST, and 13.5% on other supported stablecoins. This is because Orion Saver is currently in beta, and the team is experimenting with different rates to study how the system performs. Pigrukh explains:

“When a user deposits USDT, we swap this USDT into wrapped UST, bridge it to Terra protocol, and deposit into Anchor for the Anchor rate. This process includes bridge fees, swap fees, and so on, which the protocol is covering. So we want to ensure that the system works effectively without getting too much into the negative margin on the revenues before we bring the rates higher.” 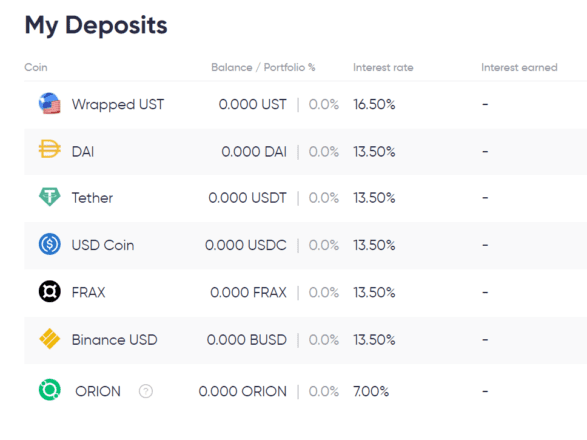 Orion’s ultimate goal is to bring the interest rates across all stablecoins up to the Anchor rate of 20%. In fact, the team says that Orion plans to level and raise the rates across every supported stablecoin to 15% by the end of the month.

In the background, Orion uses EthAnchor—a set of smart contracts developed by Orion in collaboration with Anchor—to deposit Ethereum-based stablecoins into Anchor on Terra. The process of bridging stablecoins to Terra and depositing them in Anchor involves several smart contract interactions. With the internal stablecoin pools, users only need to pay for one smart contract transaction, so they are less exposed to Ethereum’s high gas fees.

Orion Money is currently in the process of launching its native token, ORION, through an initial decentralized offering (IDO) on Polkastarter and DaoMaker, with over 100,000 users on the waitlist. The ORION token will be minted on Ethereum, and a portion of the supply will be bridged to Terra, Polygon, Binance Smart Chain, and other networks as required to enable the protocol to function more efficiently across multiple ecosystems. 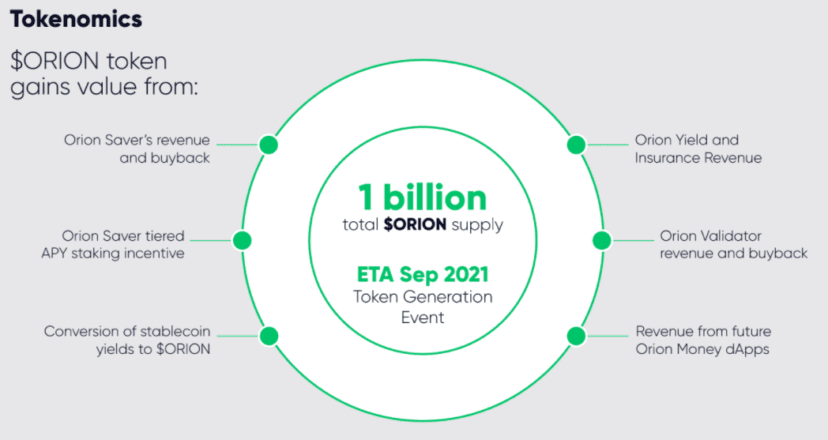 “There are two big reasons to hold and stake ORION tokens. The first is to boost the yields on stablecoin deposits, which will depend on the number of tokens staked, and the second is to get a percentage of the protocol’s revenue share through staking. We want to develop a number of revenue streams that will all converge on the ORION token as the value capture mechanism for the protocol.”

Orion plans to leverage a variety of revenue streams and dedicate them towards staking rewards. For example, Orion currently operates the largest Proof-of-Stake validator on the Terra network and plans to allocate 100% of the validator’s profits towards the Orion “staking fund” to be distributed to ORION stakers once the token is live. Additionally, Orion Money will siphon the profits from future Orion Money products towards the staking fund, which brings us to our next point.

Besides the Orion Saver product, which is already live on Ethereum, the Orion team also plans on launching several other products, including Orion Yield and Insurance, Orion Pay, tokenized derivatives, self-paying and no-liquidation loans, and protocol-specific optimizers.

First on the roadmap is the Yield and Insurance product, which will offer provide high-yield savings to users and use the liquidity to invest in diversified strategies. Explaining the product, Pigrukh says:

“The Orion Yield and Insurance product will come from the collaboration with other money markets on Terra such as Mars Protocol. It will provide guaranteed higher savings rates to Orion Saver depositors by implementing asset-neutral investing strategies via Mars Protocol with higher but variable yield of say 30%. Then we’ll work with stakers to underwrite the insurance for the interest to make it stable in exchange for the revenue share.”

For Orion Pay, the team is planning to develop fiat on-off ramps, crypto-to-fiat direct payments, and launch a crypto debit card to allow users to pay for “real-world” goods with high-yield-earning stablecoins. Orion Pay is due in Q2 or Q3 of next year, while no release dates have been set for the remaining products.

When it comes to competition, Orion sees itself in a class of its own. For now, the team says it isn’t concerned about other projects offering similar products. The project’s growth philosophy is to increase the size of the crypto savings market rather than fighting to capture a larger share of the current one. Commenting on the project’s plans to attract new users, Pigrukh says:

“Orion Money brings a better and much higher level value proposition than any savings product on the market. We’re already experiencing some flow of users from centralized lending protocols like Celsius, Nexo, and BlockFi, and also from decentralized ones like Aave and Compound. Once the Orion Pay product comes out, we want to really go mass market and bring new users into crypto.”

Orion also says it’s considered the potential risks. The team has addressed the typical smart contract security concerns associated with DeFi protocols by hiring three reputable security firms to conduct audits. However, secure smart contracts wouldn’t protect the ecosystem from regulatory attacks. Orion uses stablecoins, which have recently become a point of focus for regulators in the U.S. and around the world. In July, the Treasury Secretary Janet Yellen urged regulators to “act quickly” to deal with stablecoins. Earlier this month, Treasury officials expressed concerns about the rapid growth of pegged assets and their potential to cause financial instability. Still, Pigrukh says that the team is “not worried” about the heightened attention from regulators. He adds:

“We’re monitoring the [regulatory] developments very closely. I do think that UST has a big advantage by being a decentralized and algorithmic stablecoin. As for Orion Money, we’re planning to implement a DAO in order to truly decentralize. This is the only way to operate in crypto, and I think the increased scrutiny from regulators will only make crypto more decentralized, which is probably a good thing.”

In conclusion, Orion Money is an ambitious project developed by an experienced team with a proven product-market fit. The team’s biggest challenges are building the on-chain infrastructure required to bring Anchor’s yield rates across as many blockchains and stablecoins as possible, as well as the on and off-ramp infrastructure to help usher in mass crypto adoption.

Mayorkas says as many as 12K out of 17K migrants have been released into U.S., and ‘it could be higher’
Technology