As the last quarter of the year progresses, the cryptocurrencies have been noting a brief recovery on the charts. Although in the case of most cryptos, the price was still faltering, a few others were witnessing strong gains currently.

Major cryptocurrency like Cardano [ADA] noted a good price swing, whereas, Basic Attention Token [BAT] has been stuck at its low price level. Whereas, Monero [XMR] has been hitting its annual high at the current price and has not been showing signs of bearishness.

The daily chart of Cardano [ADA] highlighted the price of the asset had recently witnessed a strong upward push from the support at $0.0744. The price of the coin was trending lower ever since the end of July and reached $0.0744 at the end of September to note a change in price movement. Despite the strong effort, the digital asset has been in a bearish zone with absolutely low momentum among traders since the beginning of October.

The 50 daily moving average was aligned above the price bars on the verge of a price trend reversal if the price of ADA surpasses the resistance at $0.1072. Currently the IOHK CEO, Charles Hoskinson noted that Cardano’s next era Goguen was on schedule, just the publication of the roadmap with final dates was delayed.

Among the mid-level cryptos, Monero has always stood out for its privacy-centric approach. Also one of the things that the Internal Reserve Service [IRS] announced bounty worth $625,000 has been awarded to Chainalysis and Integra FEC. Despite the coin’s bid to maintain privacy, the competition was to break purportedly untraceable privacy coins, Monero (XMR).

Meanwhile, the crypto asset unlike many other cryptocurrencies has been witnessing an escalation in its value after the early-September fall. The rising value within an ascending channel has led the asset to market an annual peak at $115.08 on 5 October, while it was valued at $112.20, at press time. Even though the peak was witnessed for the first time this year, the resistance was weak at $117.65. However, supports at $97.66 and $84.90 were notably strong.

Given the boost in price, the trend in the market has remained bullish with great volatility. 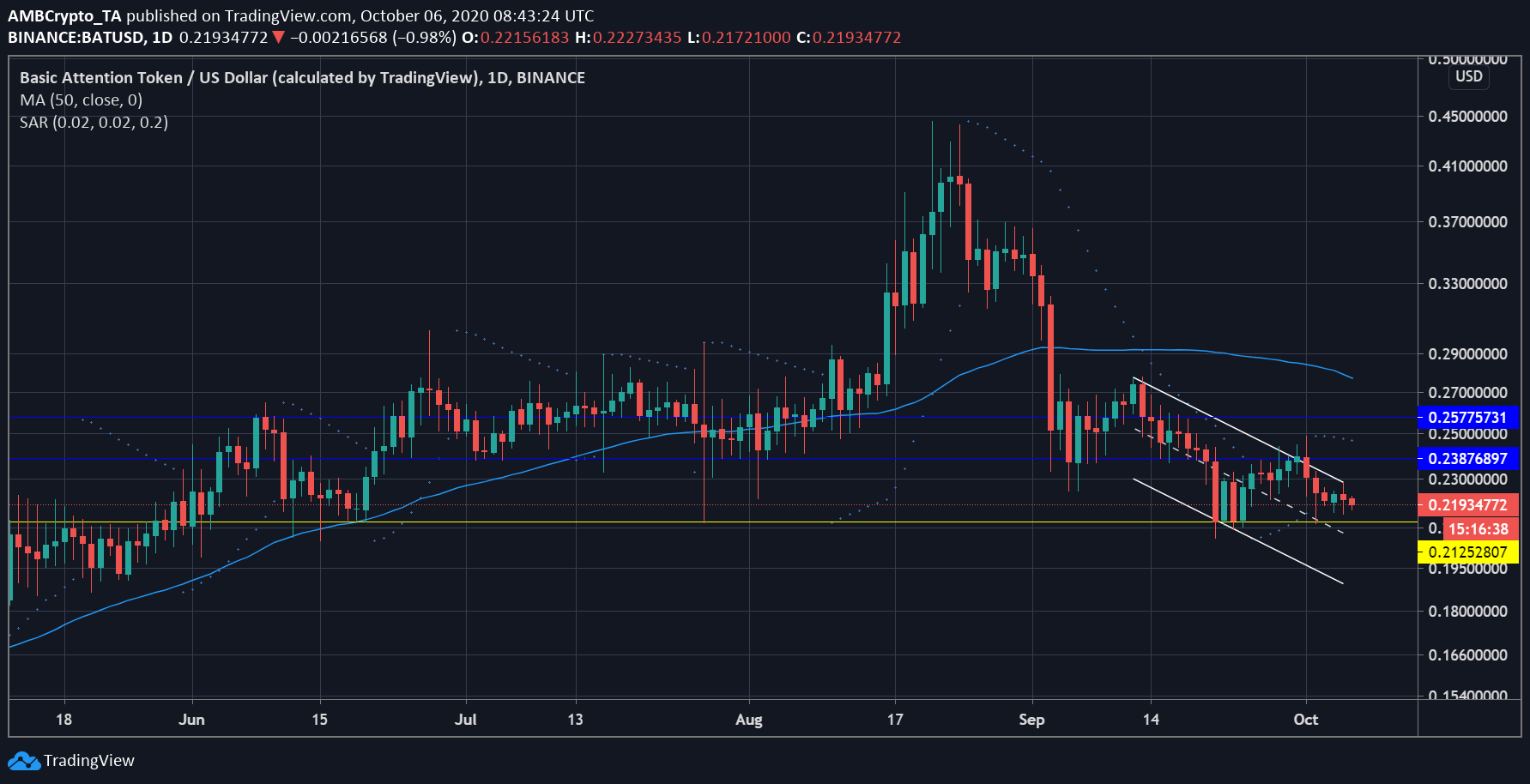 Basic Attention Token [BAT] was consolidating between $0.2387 and $0.2125 for quite some time. The asset has tried to break out of the resistance but it only retracted. The current value of BAT was $0.2194, while the trend in the market suggests a further lowering of prices.

The Parabolic SAR indicator suggested the price facing more downward pressure as the markers aligned higher over the price bars. While the 50 daily moving average affirmed this trend as it remained way above the candlesticks.