Bitcoin Dominance was dropping, and stood at 59.63, down from 60.14. In the same period of time, Bitcoin rose from $11,354 to $11,491. This combination of falling dominance and rising Bitcoin can herald a green season for altcoins. Cardano looked bullish, although a minor correction of a few percentage points might be seen in the coming days. It was a similar situation for Cosmos, while Synthetix continued to toil under a long-term downtrend but had some room for near-term gains. 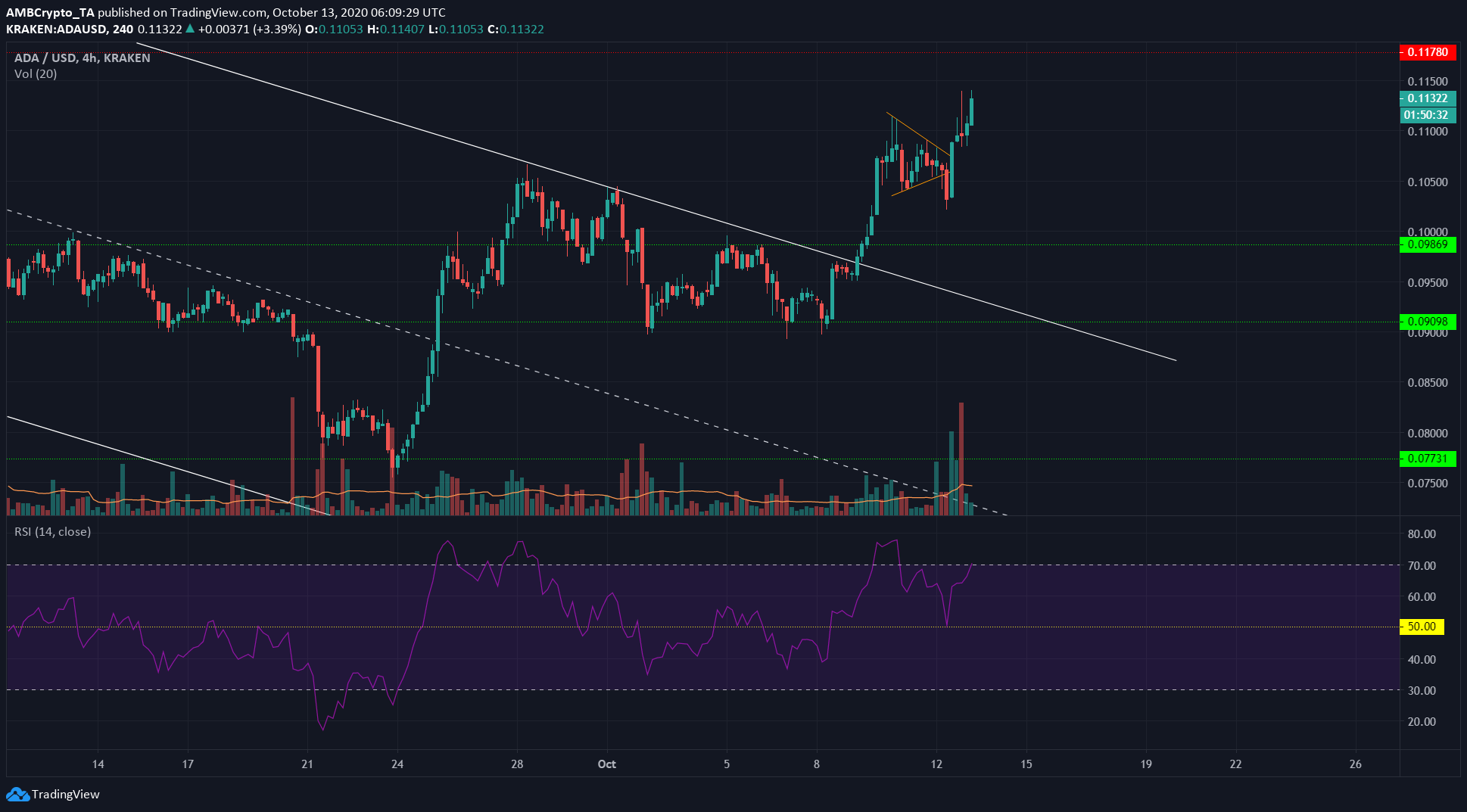 The symmetrical triangle formed by ADA (orange) is a formation that generally signals a trend continuation. Here, that would be an uptrend. However, the price invalidated the setup with a strong red candle to beneath the pennant before a stronger candle to the upside.

This was an example of stop-loss hunting and showed that some textbook setups will still have to be carefully managed.

RSI for the asset stayed above 50 and was headed into the overbought territory. It could form a bearish divergence soon. However, divergences formed in oversold/overbought generally carry less weight than those formed within the 30-70 range.

Cardano can be expected to see a minor pullback before another surge to resistance at $0.117.

In other news, Cardano’s Goguen development was touched upon by Charles Hoskinson at the end of a recent AMA. 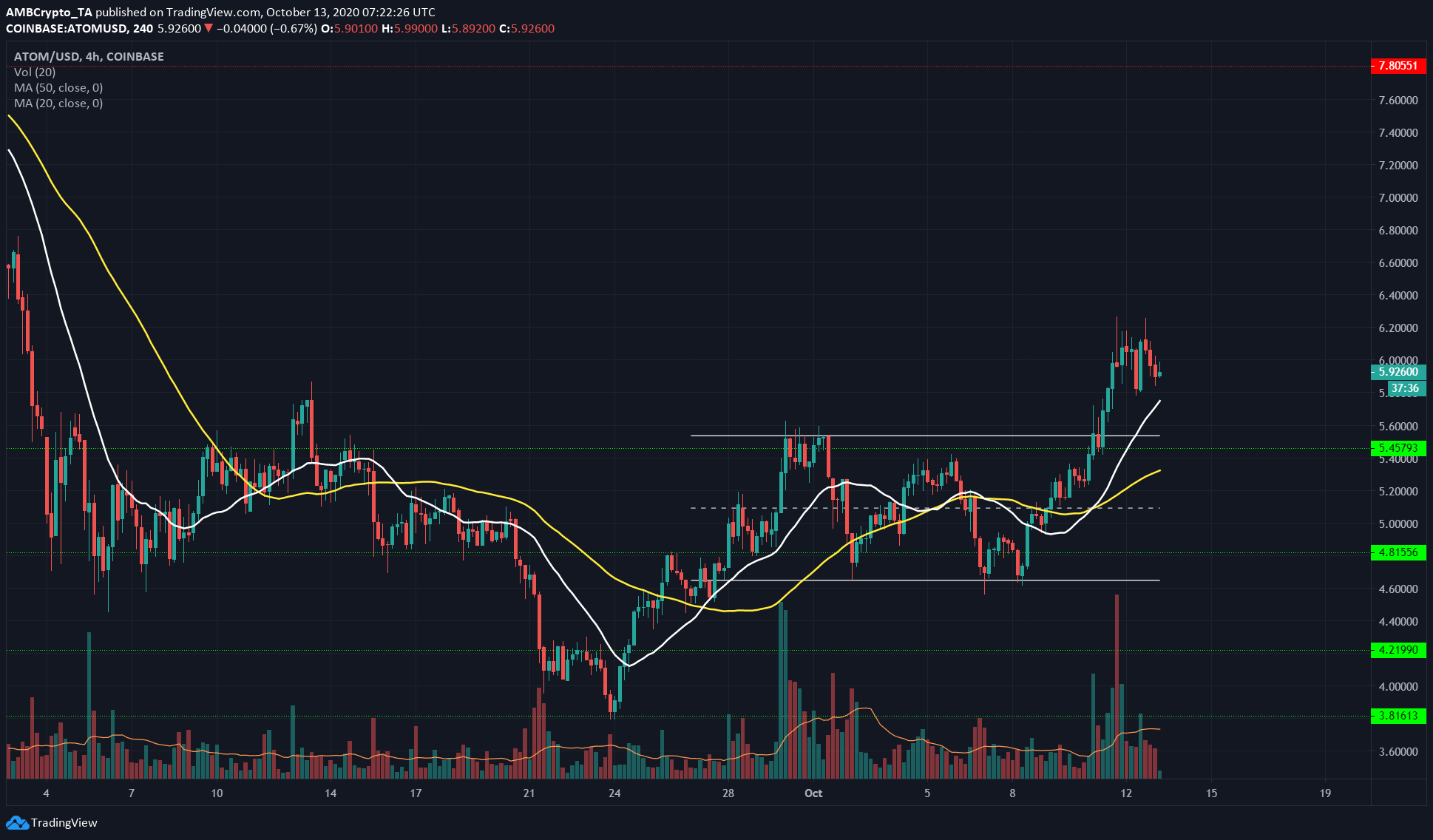 ATOM formed a rectangle top pattern and broke out to the upside to reach a local high of $6.25. The breakout was on good trading volume and saw near 13% gains.

The 20 SMA (white) was well above the 50 SMA (yellow), and alongside the recent price action, highlighted the heavy bullish momentum the asset carried with it.

It was possible that the asset would pull back to the region of $5.75 before another leg upward, but the momentum was definitely bullish in the short-term. 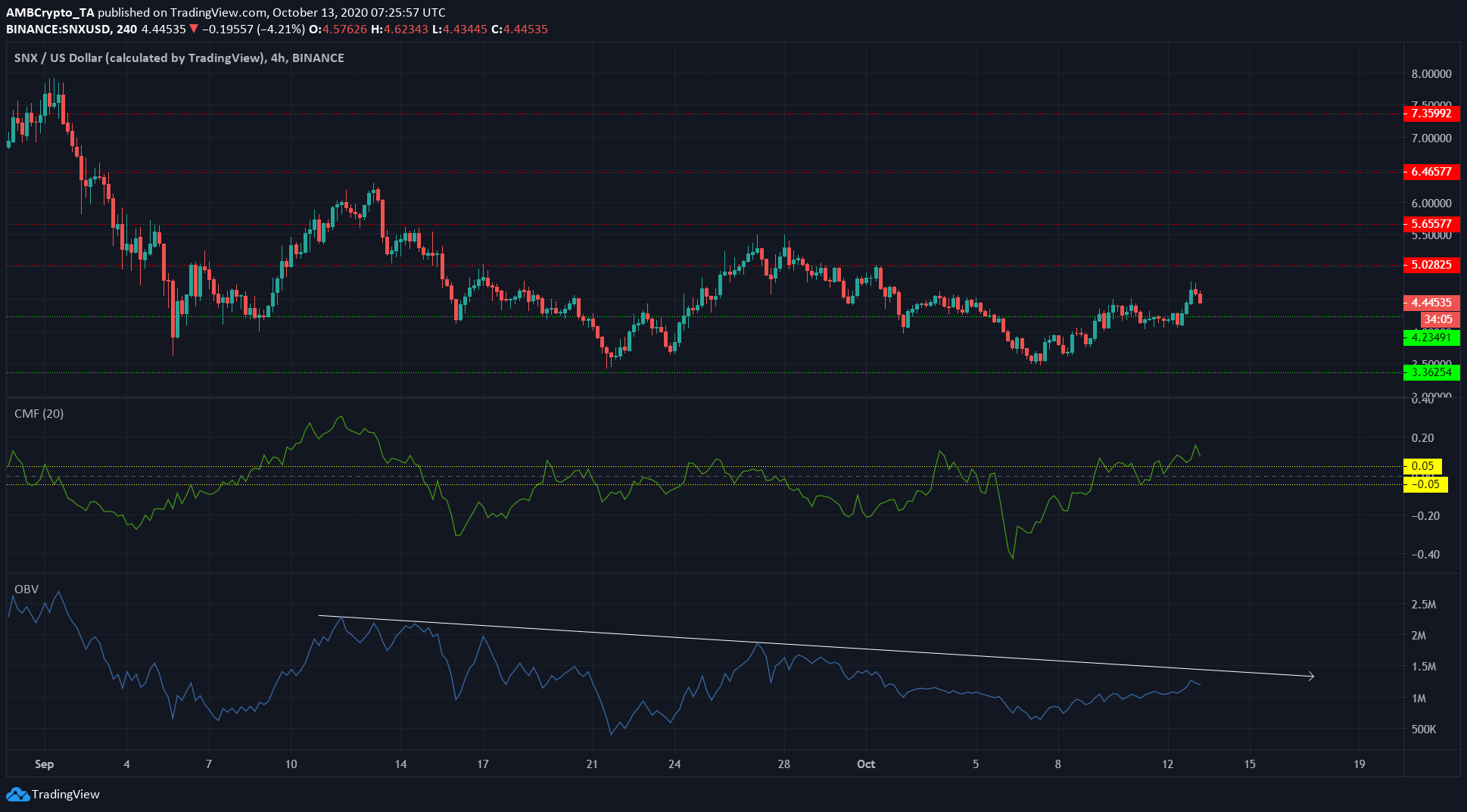 Synthetix was in a downtrend since early September and had not yet been able to reverse the trend. SNX bulls would be looking to defend $4.2, and eventually, sally toward $5. A reclamation of that level was vital to validate a bullish stance in the near-term.

The OBV captured how the buying volume has been decreasing for over a month. There was no sign yet of reversal, but the past few days saw a steady buying volume.

The CMF agreed with that assessment, as it went from a sharply negative value to slightly positive. This showed that the bulls wrested control of the market from the sellers with an overwhelming wave of buying pressure, but it remained to be seen if the wave could continue.

Trump's 'harm' may be 'even more profound' with a second term, John Bolton says