The top two cryptocurrencies by market capitalization, Bitcoin and Ethereum, have enjoyed significant gains over the past 48 hours. The assets rose after Elon Musk revealed allocations in

Bitcoin and Ethereum are back in the green after weeks of losses.

It appears that Tesla and SpaceX CEO Elon Musk’s appearance at “The B Word” virtual conference helped push the price of both cryptocurrencies up.

Musk appeared in a panel alongside Twitter CEO Jack Dorsey and ARK Invest CEO Cathie Wood at the Bitcoin event. He affirmed that Tesla would accept Bitcoin payments once the asset is mined from more renewable energy sources, and revealed that he owned some ETH. Markets quickly responded, with speculators rushing to re-enter long positions.

Despite the renewed sense of optimism in the cryptocurrency markets, Bitcoin could face a downturn if sentiment changes. BTC’s price is currently contained within a descending triangle on its daily chart that will determine where it heads next.

To continue the bearish trend, Bitcoin would have to close decisively below the triangle’s x-axis at $29,600. The downswing could send investors back into “extreme fear,” leading to a potential 40% price drop toward $17,650.

But if the bulls are encouraged by Musk’s remarks to get back into the market, the leading cryptocurrency could make a comeback. 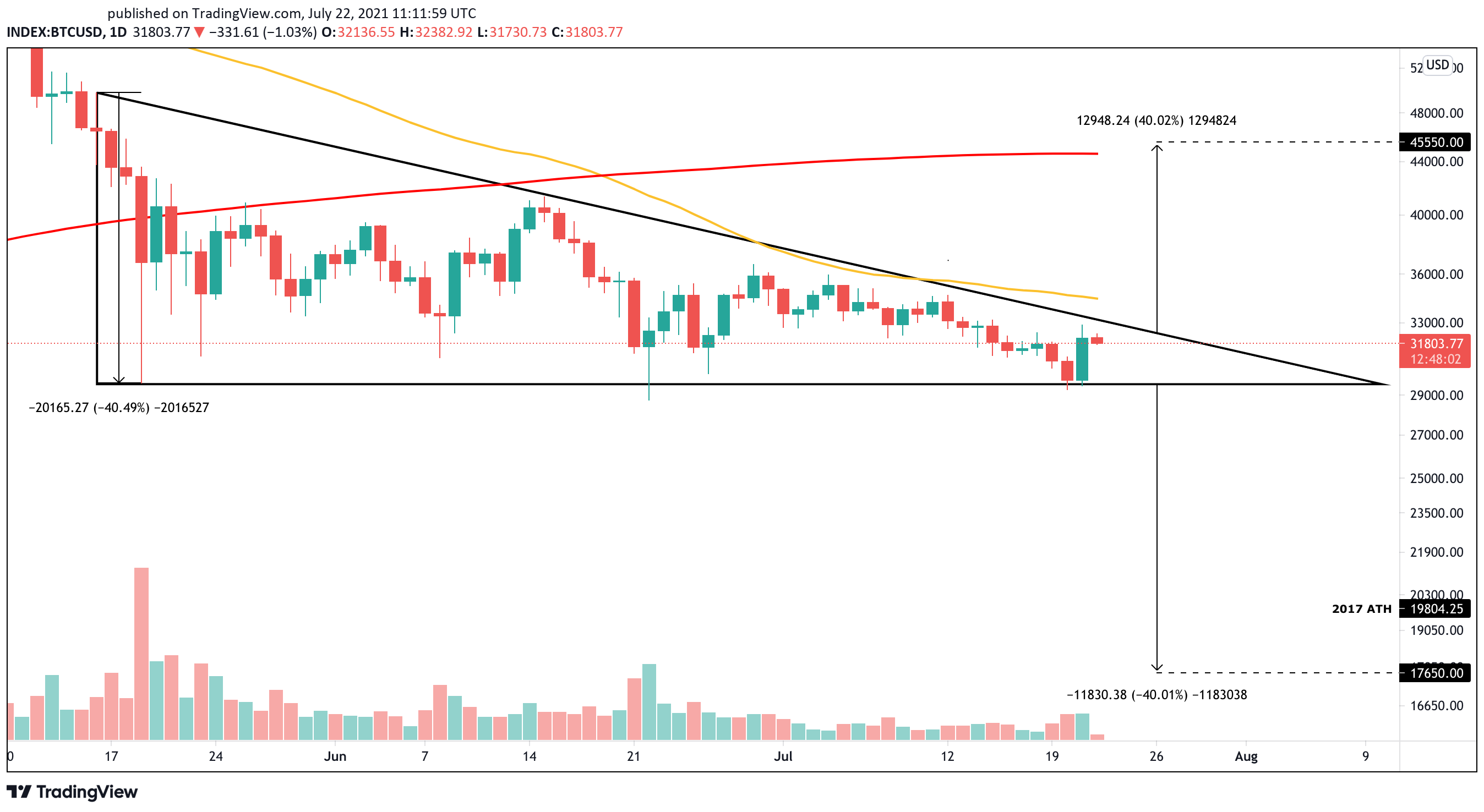 Ethereum has also enjoyed significant gains after Musk said he owns “a bit” of ETH. The second-largest cryptocurrency by market capitalization rebounded from the $1,700 support level to hit a high of $2,035 following the discussion.

Transaction history shows that ETH now needs to sustain a daily candlestick close above $2,080 to advance further. IntoTheBlock’s In/Out of the Money Around Price (IOMAP) reveals that upon breaking the $2,080 resistance, there is no opposition on the way to $2,300.

Nonetheless, this price point may absorb some of the buying pressure seen recently as 3.5 million addresses had previously purchased nearly 10.5 million ETH around that range. As underwater investors try to break even in their long positions, they could prevent ETH from reaching higher highs.

Although the odds seem to favor the bulls, investors must be aware that the $1,700 support level is weakening over time. If bears were to gain back control of the price action and push ETH below this critical demand barrier, the optimistic outlook would get invalidated.

Under such unique circumstances, ETH would likely drop to the next support area between around $1,400, where over 4.5 million addresses hold roughly 19 million ETH.