Bitcoin [BTC]: Post-bull run BTC transactions on a decline, signs of slowing down?

Since Bitcoin began its touted bull run on the back of a massive April ascendance over $5,000, positive signs for the entire market began sprouting. Altcoins saw a massive rise as the king coin’s market dominance rose above 60 percent and the transaction fees grew over eight times compared to its peers.

With these buoyant signs, collective swings and imminent catalysts, the number of Bitcoin transactions has not fared so well. The frequency of transactions increased prior to the beginning of the bullish swing in April, up from a low of under 250,000 to close to 400,000, which maintained till the close of the month.

At the beginning of May, the transactions spiked to over 452,000, albeit for a couple of days only following a drop to under 350,000. The flatline formed around the 400,000-mark following the transactions count of April has not been breached in the past two months, not considering the May rise to 452,000.

The same was pointed out earlier by Longhash, the cryptocurrency research and analytics hub, which alluded to the ‘flatline’ placed at 400,000 and the early May exception. A chart added to the research referred to the transactions as having “stagnated”. 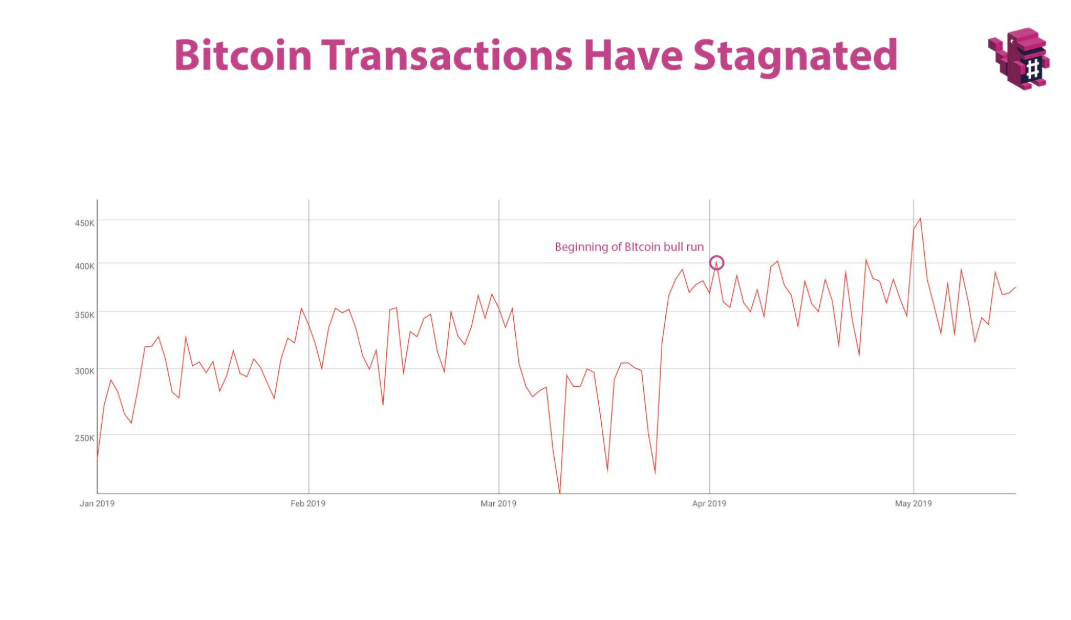 On the flipside, confirmed Bitcoin transactions in late-April, when the price was below $6,000, hit levels not seen since January 2018, when the recorded BTC price was well over $10,000. A Longhash report detailing the same drew a correlation between the price and confirmed transactions, stating:

“Bitcoin’s confirmed transaction count often spikes at roughly the same time that prices spike, although there isn’t always a direct relationship between what the price is doing and what how many daily transactions are processed.”

With the Bitcoin pullback, caused by a host of factors, market correction, the close of Consensus 2019 and even a large sell order on Japanese crypto-exchange Bitstamp, the number of transactions dropped from 390,000 to 360,000 on May 17. However, the lowest transaction count for this month was at 322,000, recorded on May 10.

Hans von Spakovsky, Charles Stimson: The Trump administration can bring justice to Iran for its role in 1983 Beirut bombing

'I've got a plan': Elizabeth Warren's running as the policy wonk candidate and her poll numbers keep going up
Technology