Despite developments that could have had a strong bearish impact on Bitcoin such as the Kucoin hack, BitMEX co-founders being charged by the CFTC, or the stock market drop following the U.S President’s positive coronavirus test, Bitcoin stayed strong above $10,500. However, the Crypto Fear and Greed Index stood at 40, suggesting fear in the market.

Binance Coin’s markets appeared to be in favor of the buyers, although in the short-term, some downside could be seen. NEM had a bearish market, while Enjin‘s charts pointed to strong bearish sentiment, but could find support around the region of demand. 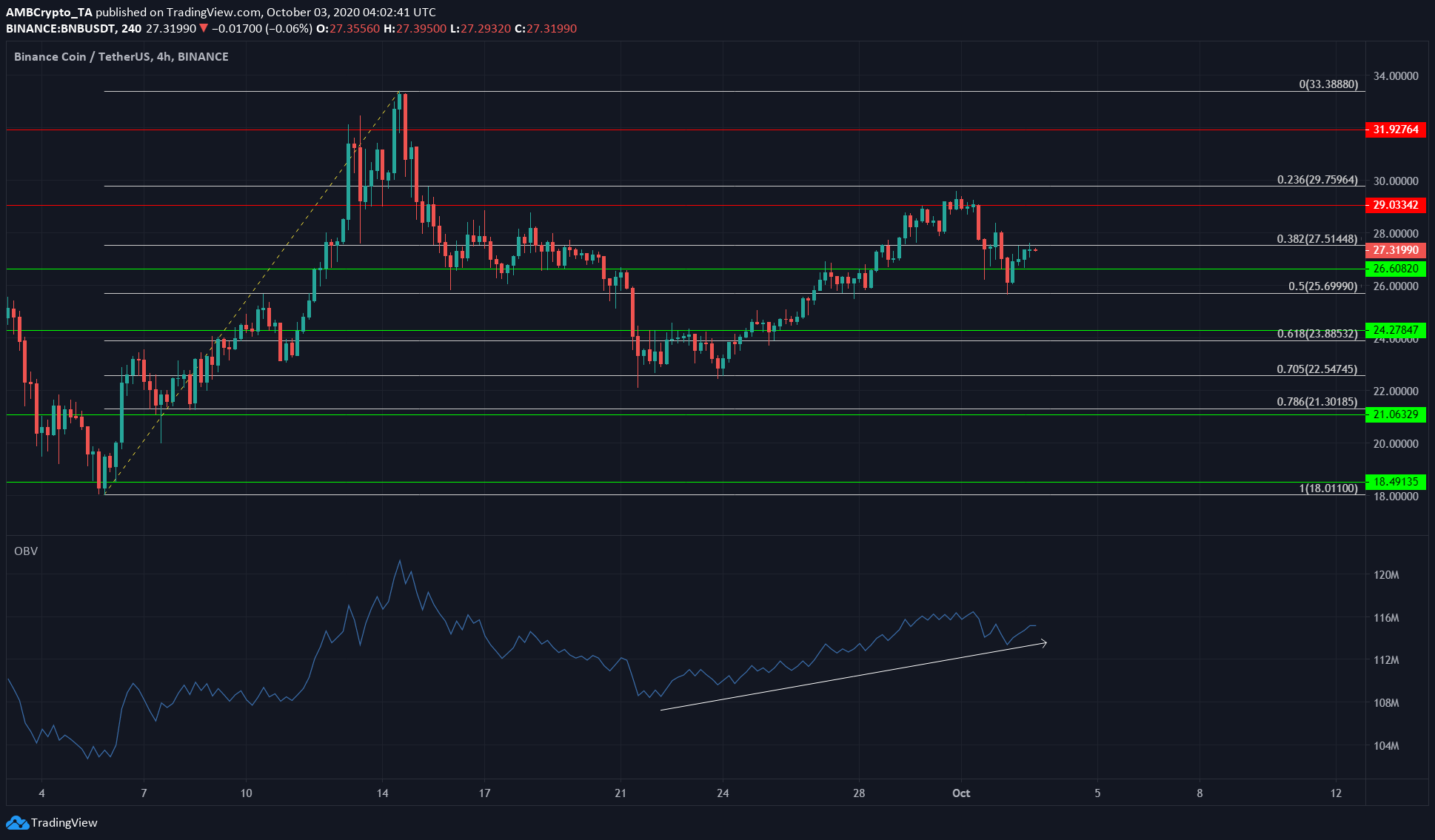 BNB found resistance at $29 and was forced to drop to $25.7 to find support. This was the 50% retracement level highlighted by the Fibonacci Retracement tool. At the time of writing, BNB was valued at $27.3.

The 38.2% retracement level, $27.5, loomed right above BNB, where it could face stiff resistance. It also had $29 as another zone of resistance beyond the aforementioned level.

However, the steady rise of BNB since the early-September lows of $18 appeared to be backed by buyer interest. The surge from $18 to $33 was followed by a 70.5% retracement of the move, to a level sometimes called optimal trade entry, OTE.

The OBV showed that recovery from the retracement was validated by buying volume as the OBV formed higher lows and trended upwards. This suggested that BNB could continue moving north on the charts. 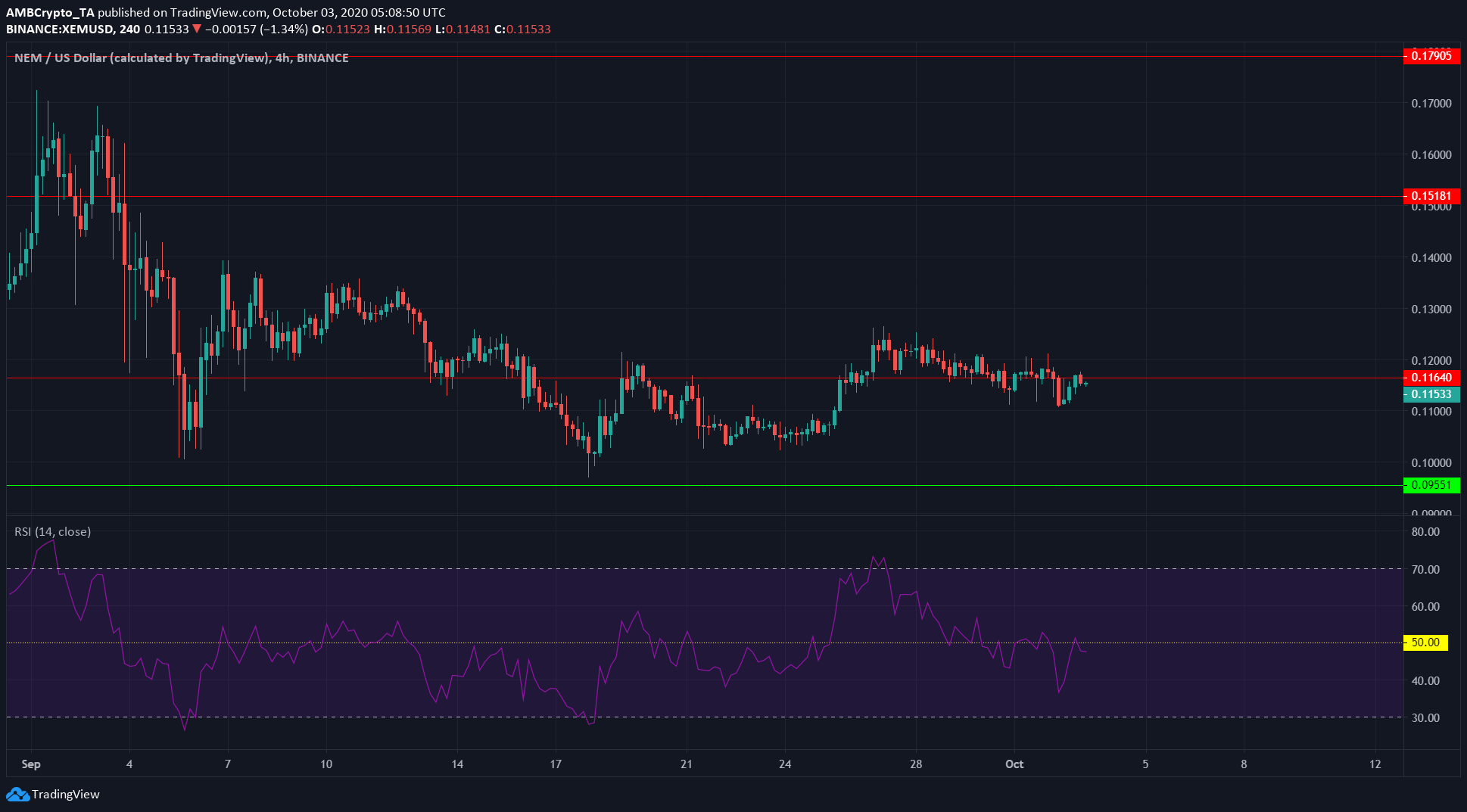 NEM noted a lack of momentum in the market. However, its outlook remained bearish. XEM was rejected at the zone of resistance at $0.116.

In fact, NEM’s price closed above the level and retested it as support, but the bears were strong and pushed the price back under the level.

The RSI, along with the price, was forming lower highs and lower lows. It wavered around the neutral 50-zone for a few days, following which, it dipped significantly before rising again. 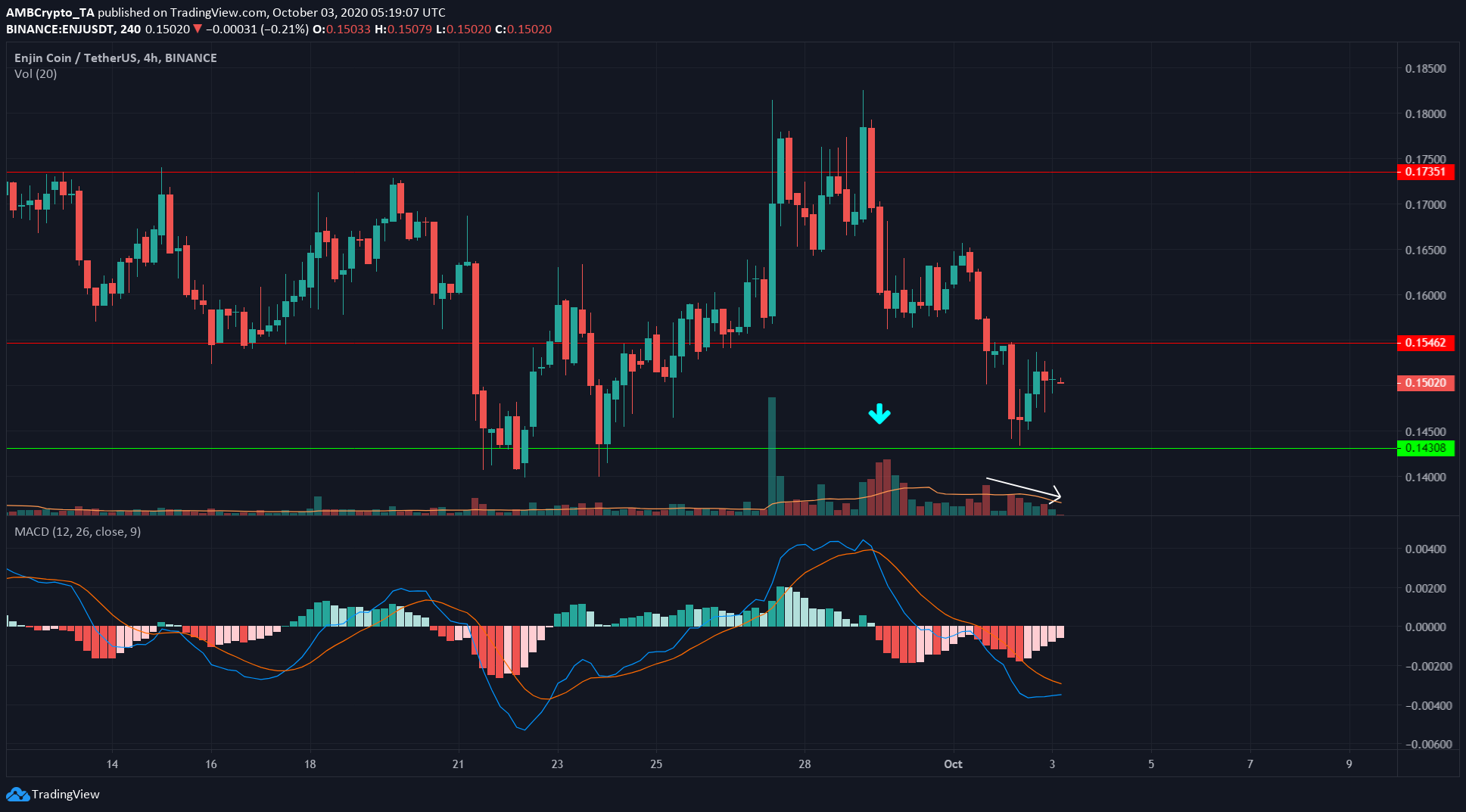 Enjin last traded beneath $0.143 in May of this year. Its attempt to scale the $0.173 resistance was met with strong opposition, as shown by the spike in trading volume (cyan arrow).

However, over the past few days, the decreasing trading volume showed that the wave of selling pressure might be at its end. MACD had formed a bearish crossover and moved beneath zero as well, indicating strong bearishness in the market.

The strength of support at $0.143, combined with falling trading volume, was evidence that $0.143 could be a floor for ENJ prices to bounce off of.