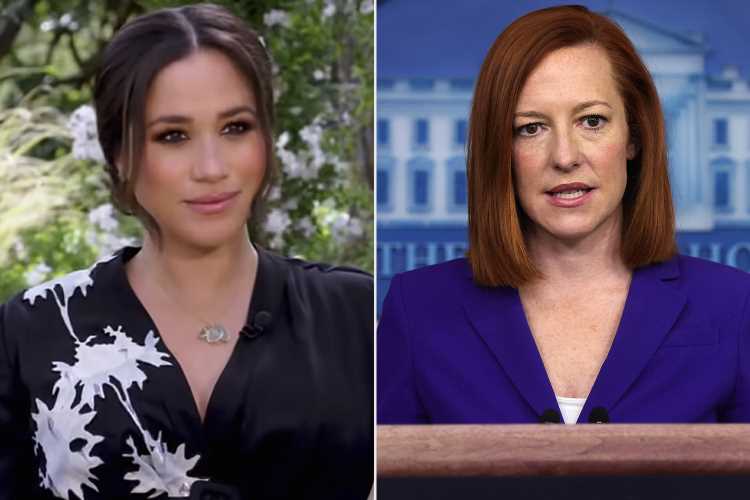 White House Lauds Meghan Markle for Opening Up About Her Mental Health: 'That Takes Courage'

Everyone, including the White House, is talking about Meghan Markle and Prince Harry's sit-down with Oprah Winfrey on Sunday night.

"Obviously many of us caught the interview, as many Americans did and many people around the world," White House Press Secretary Jen Psaki told reporters on Monday, after being asked if the administration had comment on Winfrey's revealing conversation with the Duke and Duchess of Sussex.

In the Sunday primetime special, Meghan opened up about her and husband Harry's tumultuous break from royal life.

She also discussed how life in the global spotlight of the monarchy, scrutinized by a tabloid press while her choices were simultaneously restricted, had impacted her own mental health.

"I was ashamed to say it at the time and ashamed to have to admit it to Harry. But I knew that if I didn't say it — then I would do it," Meghan told Winfrey. "I just didn't want to be alive anymore."

She continued that "[what's] so important for people to remember is you have no idea what's going on for someone behind closed doors. No idea. Even the people that smile and shine the brightest lights. You need to have compassion for what it actually potentially going on."

On Monday, Psaki, 42, commended Meghan for her candor.

"For anyone to come forward and speak about their own struggles with mental health and tell their own personal story, that takes courage," Psaki said. "That's certainly something the president [Joe Biden] believes."

Psaki added that Biden has "talked about the importance of investing in a lot of these areas," referencing funding for mental health. Meghan, 39, received support from both friends and viewers for opening up about her struggle to Winfrey.

"Meghan Markle, my selfless friend, lives her life – and leads by example – with empathy and compassion," Serena Williams wrote on Instagram.

"She teaches me every day what it means to be truly noble," Willliams added. "Her words illustrate the pain and cruelty she's experienced."

Elsewhere in the interview, Meghan revealed that there were "concerns and conversations about how dark [son Archie's] skin might be when he [was] born," though she declined to say who in the family had made those remarks.

Meghan, who is biracial, has opened up about racism she and her mother have faced, most notably in a 2012 anti-racism video campaign that resurfaced last year. On Sunday, she and Harry also spoke candidly about being financially cut off from the royal family and how Prince Charles "stopped taking" Harry's calls after he informed Charles and Queen Elizabeth that he would be moving to the United States.

After praising Meghan for talking about her mental health, Psaki told reporters on Monday that the White House would not comment further, given that she and Harry are now private citizens living in California.

But the press secretary did make a point to note the close relationship between the U.S. and the U.K. (where the Winfrey interview drew a different kind of reaction from some).

"Let me just reiterate," Psaki said, "We have a strong and abiding relationship with the British people and a special partnership with the government of the United Kingdom on a range of issues and that will continue."

If you or someone you know need mental health help, text "STRENGTH" to the Crisis Text Line at 741-741 to be connected to a certified crisis counselor.