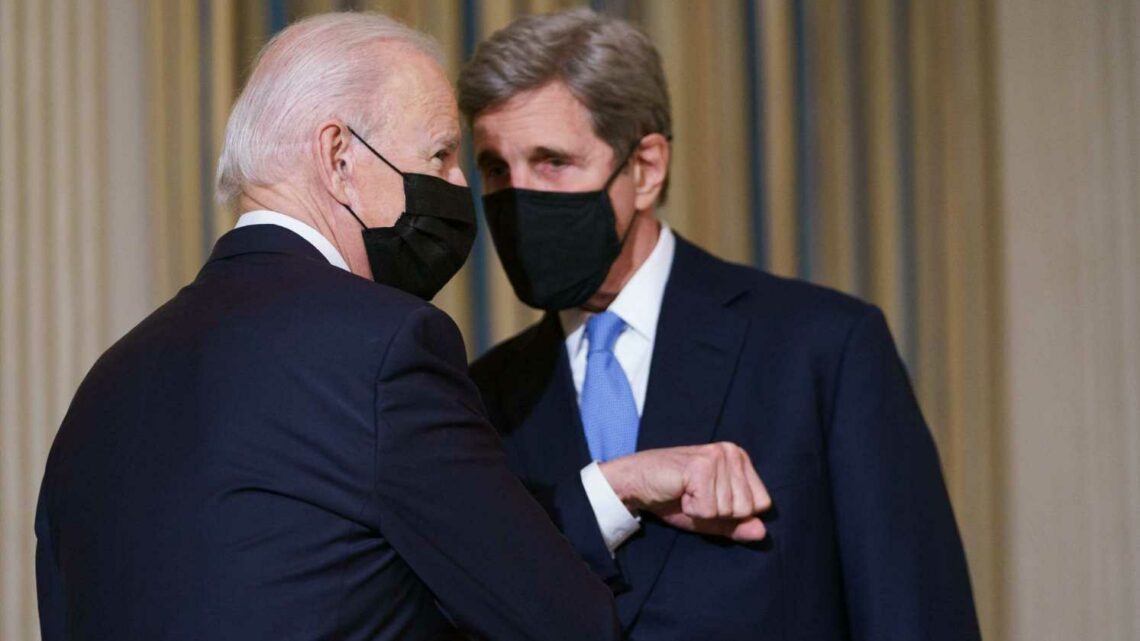 What to expect ahead of Biden's global climate change summit

President Joe Biden will host a closely watched global leaders climate summit on Thursday and Friday, during which the U.S. is expected to unveil an updated carbon emission reduction target and urge cooperation with other nations to combat the climate crisis.

The president has invited 40 world leaders to the virtual summit and is hoping to reach deals with some of the world's largest greenhouse gas emitters. John Kerry, Biden's climate envoy, has been meeting with officials in China and elsewhere to garner support for the summit.

The summit is an opportunity for the U.S. to rejoin global efforts to address climate change after the Trump administration pulled the country from the Paris climate accord and dismantled environmental regulations. The U.S. is the world's second-biggest carbon emitter, behind China.

One of the expected actions from the White House is a new emissions reduction target for the Paris climate accord, the landmark agreement among 200 nations to reduce their emissions.

Biden is expected to unveil the new target before or during the summit and pledge money to help less-wealthy countries combat climate change.

Environmental groups and businesses have urged the president to set an emissions reduction target of at least 50% by 2030, which would double the country's previous commitment and help limit global temperature rise to no more than 1.5 degrees Celsius below pre-industrial levels.

The Obama administration made a goal to cut emissions 26% to 28% below 2005 levels by 2025, but former President Donald Trump halted federal efforts to meet that target, pulled the U.S. from the Paris accord and implemented policies favoring fossil fuel producers.

The Natural Resources Defense Council said in March that a 50% reduction target would "help pull the country out of the pandemic-induced recession by putting millions of Americans to work every year, avoid tens of thousands of premature deaths, and inspire more ambitious global climate action."

And more than 300 executives last week urged Biden to nearly double U.S. targets to reduce emissions ahead of the summit, a push signaling the private sector's goals align with the administration's climate policies.

Biden's climate agenda includes a major infrastructure package that invests in a clean energy transition, one of the country's largest federal efforts to curb greenhouse gas emissions that would be paid for largely by raising corporate tax rates.

The president has also vowed new regulations on fossil fuel producers and executive orders to reverse Trump's climate policy rollbacks on issues like clean water, air, chemicals and protection of land and wildlife.

Still, a 50% reduction target would fall behind commitments by the U.K. and European Union, which have pledged to reduce emissions by 68% and 55% by 2030.

The U.S. and China, the world's two biggest carbon polluters, have agreed to cooperate on climate change but remain rivals on issues like trade, human rights, intellectual property and technology. Biden has invited Chinese President Xi Jinping to the summit, though it's unclear if Xi leader will join in.

Kerry and his Chinese counterpart, Xie Zhenhua, said in a joint statement recently that the countries "are committed to cooperating with each other and with other countries to tackle the climate crisis, which must be addressed with the seriousness and urgency that it demands."

Kerry also told CNBC earlier this month that the U.S., China and Europe, which account for about half of global emissions, must work together with other countries to deeply reduce emissions.

"I think that this is a huge economic opportunity, not just for the United States, for people all around the world," Kerry said.

China announced last year a commitment to reach peak emissions by 2030 and be carbon neutral by 2060. Biden has pledged to put the U.S. on a track to reach a zero-emissions electricity sector by 2035 and a net-zero economy by 2050.

The April summit comes before the next major U.N. climate summit in Glasgow, Scotland, in November, where countries in the Paris agreement will provide updated emissions targets for the next decade.

This Is the State Where Doctors Make the Most Money