A militant Donald Trump supporter whose photo is featured on an FBI wanted list because he was caught on video battling with police officers at the U.S. Capitol on Jan. 6 attended a political event last week for a Trump-loving Pennsylvania politician who backed the former president’s efforts to overturn the 2020 election.

The event’s headliner: Trump lawyer Rudy Giuliani, who called for “trial by combat” during his speech on Jan. 6 and whose phones and computers were seized in a Justice Department investigation last month.

Samuel Lazar, who is Capitol suspect No. 275 on the FBI website, posed for photos alongside right-wing Pennsylvania state Sen. Doug Mastriano (R) at the May 15 event headlined by Giuliani. A tipster sent the photos to HuffPost after spotting them on Facebook.

Both Mastriano and Lazar were at the U.S. Capitol on Jan. 6, though Mastriano claimed he left when he realized the protest was no longer peaceful. Mastriano, whose campaign spent thousands of dollars on buses to bring people to D.C. on Jan. 6, later issued a statement saying those who violated the law must be prosecuted. Mastriano’s office did not immediately respond to a request for comment. 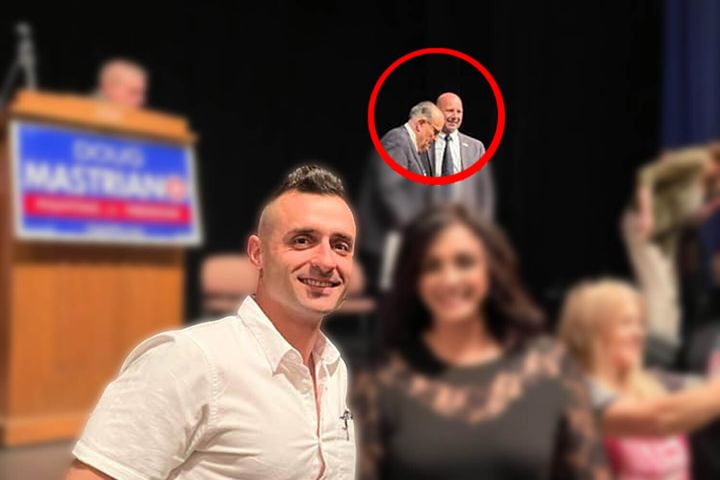 Lazar was photographed with a number of other Republicans at the May 15 event, including Teddy Daniels, a right-wing former police officer running for Congress in Pennsylvania’s 8th District; failed GOP House candidate and Senate hopeful Kathy Barnette; and state Rep. Stephanie Borowicz.

Politicians, of course, take photos with people they don’t vet all the time. Yet it illustrates how, even as some conservatives attempt to rewrite the history of Jan. 6 and spread new conspiracy theories about who was really behind the insurrection, the people who actually violently participated in the attack ― and in fact instructed the mob with a bullhorn ― are still deeply ingrained in the Trump coalition.

Online sleuths know Lazar as #FacePaintBlowhard, and circulated images and videos of him as they traced his actions during the assault on police outside the Capitol. The FBI eventually posted an image of him online, looking for tips about his identity. What the bureau apparently didn’t realize at the time was that the suspect’s name was already public information: Lazar was featured in his local paper days after the Capitol attack after making extensive posts about his activities on Facebook.

A Jan. 10 story on Lancaster Online chronicled some of Lazar’s trip in D.C., sometimes relying on the videos he posted. The story highlighted his military-style outfit and his patch, which read “Blessed be the LORD, my rock, who trains my hands for war, and my fingers for battle.” In a Facebook post after the Capitol attack, the news outlet reported, Lazar wrote that there was “a time for peace and there’s a time for war. Our constitution allows us to abolish our [government] and install a new one in [its] place.”

Members of an online community working to identify Capitol offenders spotted the man they knew as #FacePaintBlowhard as being among the first to storm through the barricades, yelling in an officer’s face, trying to grab a bike rack away from an officer, using a megaphone to direct the mob to push forward, holding a can of what looks like pepper spray, and then spraying the can at a police line. He also helped the mob use a giant Trump sign as a battering ram against a police line.

In a video shot down the street from the Capitol, Lazar told onlookers that they “maced ’em [law enforcement officers] right the fuck back.”

“Fuck the tyrants,” Lazar said. “We need to hang these motherfuckers.”

A tipster identified Lazar to HuffPost after the FBI circulated his photo, and Lancaster Online ran a story reporting his identity days later, in early April. When a Lancaster Online reporter spotted Lazar outside of his apartment last month, he reportedly ignored the reporter and then hung up when they called.

Reached by HuffPost on Tuesday morning, Lazar claimed he “wasn’t able to make it” to the Mastriano event he was photographed at, and then hung up.

It’s unclear why the FBI hasn’t yet moved on Lazar more than a month after the Lancaster Online story that mentioned his presence on the FBI list. The bureau is still overwhelmed with the number of tips it has received about Jan. 6, and federal investigations can take a long time to come to fruition. Still, Lazar’s posture is unusual. People on the FBI’s wanted list tend to lay low, and while Lazar renamed his Facebook page and curtailed his public social media presence, he’s still attending political events with people who are telling him that the election was stolen. A FBI official did not immediately respond to a request for comment.

The same day that Lazar attended the event with Trump conspiracy theorists who believe the election was stolen, Trump issued a series of diatribes calling the 2020 election “THE CRIME OF THE CENTURY!” and the “greatest Election Fraud in the history of our Country.” In addition to inspiring more attacks on officials, Trump’s words will make it more difficult for Capitol defendants seeking pretrial release to argue that they don’t pose a continuing threat.