Trump Sets The Stage For Mayhem At Tulsa Rally

President Donald Trump is all but cheering for violence in Tulsa, Oklahoma, on Saturday.

A day ahead of his big rally in the Sooner State, his first since COVID-19 and protests against racism gripped the nation, Trump took to Twitter to pick a fight with American citizens.

“Any protesters, anarchists, agitators, looters or lowlifes who are going to Oklahoma please understand, you will not be treated like you have been in New York, Seattle, or Minneapolis,” he wrote. “It will be a much different scene!”

The threat against protesters, most of whom will be out demonstrating against systemic racism and police brutality, is another indication of Trump’s stance on the First Amendment. While he has claimed he’s being censored by social media companies, he has also advocated against free expression. He’s presided over federal forces shutting down protests. He’s said some journalists should be executed, according to an upcoming book by former aide John Bolton. And In 2016, Trump said he’d like to punch a protester in the face and told supporters to knock out anyone that tried to throw tomatoes. Meanwhile, his supporters have repeatedly indicated that they’re listening and ready to follow orders.

His tweet indicated that Saturday’s rally, which will have 19,000 attendees indoors and numerous protesters, could be the scene of a violent confrontation. And he’s fanning the flames.

Tensions were always going to be high at the rally, given the nationwide movement against racism and the particular date and place the Trump campaign picked for his return to mass events.

Trump rescheduled the campaign event “out of respect” for Juneteenth, the day commemorating Black emancipation from slavery. He’s faced fierce criticism for holding the rally, originally slated for Juneteenth, in Tulsa, the site of a racist massacre in 1921 when white mobs torched a prosperous Black neighborhood and killed as many as 300 Black residents.

But moving the rally forward a day doesn’t remove the threat, and Tulsa is preparing for potential conflict. G.T. Bynum, the city’s mayor, issued an executive order Thursday declaring a civil emergency ahead of the rally and said law enforcement had information “that shows that individuals from organized groups who have been involved in destructive and violent behavior in other States are planning to travel to the City of Tulsa for purposes of causing unrest in and around the rally.” Some 250 soldiers with the Oklahoma Army National Guard have been activated to provide security at the event, The Associated Press reported. 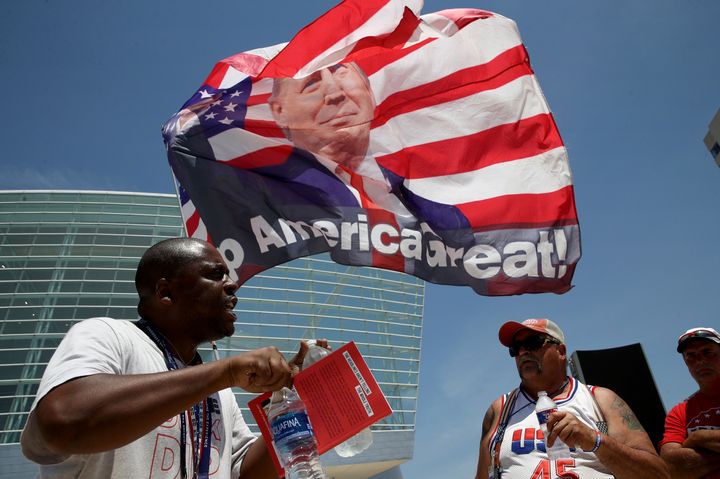 In recent weeks, Trump has repeatedly railed against what he calls “lowlifes,” “thugs” and “hoodlums” ― escalating tensions at a time when much of the nation is crying out for racial justice and suffering from the economic fallout of a pandemic made far worse by the Trump administration’s botched response. That Trump took to Twitter on Juneteenth to specifically call out “protesters,” who have overwhelmingly remained peaceful in the face of violent police crackdowns, shines a clear light on how he views the ongoing unrest: not as a growing movement for equality but rather some Democratic plot to take him down.

It is unclear how the scene Trump is warning of Saturday in Tulsa would be different from what has played out across the country since George Floyd, a Black man, was killed by Minneapolis police late last month. In many American cities, including those the president mentioned in his Friday tweet, police have responded to anti-racism protesters with tear gas, rubber bullets, violence and arrests.

The crackdowns haven’t been enough to satisfy Trump, who has a long history of inciting violence and making racist comments. In a June 1 video call with the nation’s governors, Trump dismissed state leaders as “weak” and called for greater use of force.

“You have to dominate,” he said. “If you don’t dominate, you’re wasting your time. They’re going to run over you, you’re going to look like a bunch of jerks.” 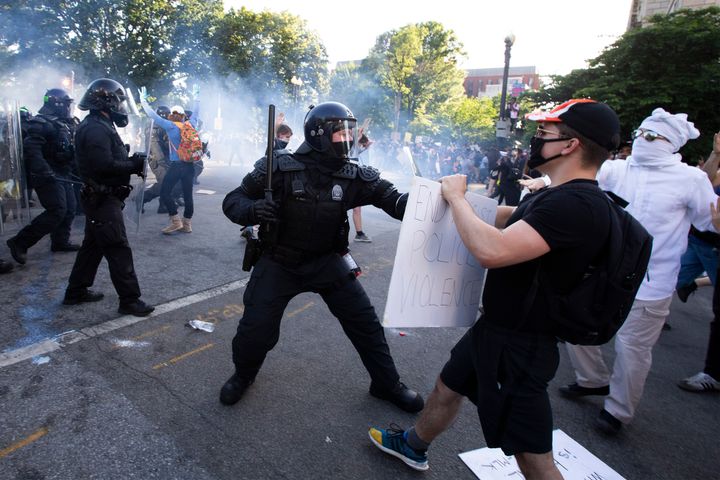 Later that day, law enforcement officers ― at the Trump administration’s direction ― violently cleared protesters from in front of the White House using tear gas so that Trump could walk to a nearby church and pose for a photo while awkwardly holding up a Bible. The crackdown came a day after media reports that Trump had been rushed to an underground bunker at the White House over the weekend to ensure his safety as protests raged outside. Apparently outraged by coverage depicting him in hiding, Trump told aides he wanted to be seen outside, a source told CNN after the violent episode.

Along with condemning Trump’s appearance in Tulsa during the Juneteenth celebration, Black community leaders have voiced fears that it will end with violence. “We’re all terribly concerned,” the Rev. Ray Owens, pastor of the historically black Metropolitan Baptist Church, told The Associated Press.

“What he was meaning is violent protesters, anarchists, looters ― the kind of lawlessness that we saw play out before President Trump came in with the National Guard and calmed our streets with law and order,” White House press secretary Kayleigh McEnany said during a briefing.

McEnany’s response ignores Trump’s use of “any protesters” in his tweet, not to mention his ongoing support for aggressive military action to quash demonstration, and advocacy for violence among his supporters.

“The Trump rally this weekend is going to be a massive, angry gathering, a response to the protests, and from what I’ve seen covering the rallies there’s a real, real opportunity for violence and bloodshed,” Jared Yates Sexton, an author and  associate professor of writing at Georgia Southern University, wrote in a Twitter post Friday.

The American Civil Liberties Union responded to Trump’s hostile post by promising to take legal action against him or any mayor or police department that attacks protesters.

“You WILL be held accountable,” the civil rights organization wrote on Twitter.

Andy Campbell contributed to this report.