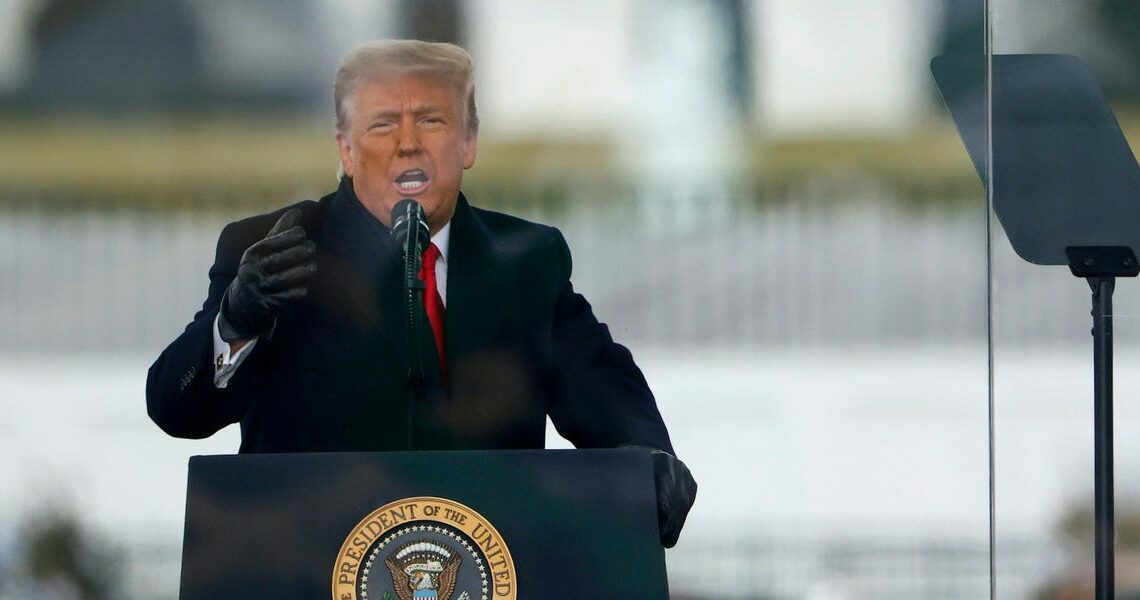 Trump didn't testify on day 2 of his Senate impeachment trial, but he still did all the talking

Former President Donald Trump’s lawyers rejected a request this month from Democratic House impeachment managers for him to testify at his Senate impeachment trial. But on Wednesday, as oral arguments in the trial kicked off, the managers still made sure Trump did most of the talking via tweets, rally speeches, news conferences, and other public statements.

The former president is barred from social media and has largely stayed out of the public spotlight since the deadly Capitol insurrection on January 6. On Wednesday, however, it was like he was in the room as the House managers pieced together a damning portrait of how his own words paved the way for the siege.

“You will see during this trial a man who praised and encouraged and cultivated violence” weeks before the insurrection, lead impeachment manager Rep. Jamie Raskin said.

It was a stark contrast to Trump’s first impeachment, when the public heard testimony from a dozen witnesses who painted a broad picture of the extent to which the then president went to pressure a foreign government into meddling in a domestic election.

This time, the impeachment managers emphasized that they would rely solely on “cold, hard facts” and footage of the siege to draw a straight line between Trump’s rhetoric and the violence at the Capitol.

Raskin opened Wednesday’s proceedings by laying out a timeline of Trump’s public efforts to overturn the election results, pointing to a December 12 Trump tweet in which he wrote, “WE HAVE JUST BEGUN TO FIGHT!!!”

A week later, on December 19, Trump told his followers to show up to a “big protest” in Washington, DC, on January 6. “Be there, will be wild!” Trump tweeted.

Raskin emphasized that in addition to social media posts and news stories, there were also “credible reports” from the FBI and US Capitol Police warning of potential violence at the January 6 rally.

‘He wanted to make sure that his supporters were angry’

Castro pointed to specific statements Trump made on Twitter, during news conferences, and at political rallies in the run-up to the election:

“He didn’t care if the claims were true,” Castro said after running through the montage. “He wanted to make sure that his supporters were angry, like the election was being ripped away from them.”

The insurrection ‘never would’ve happened but for Donald Trump’

Rep. Madeleine Dean went next, laying out how after losing the election, Trump tried to strongarm election officials into doing his bidding.

She pointed to his tweets and public statements attacking Georgia’s secretary of state, Brad Raffensperger, and a January 2 phone call in which Trump ordered Raffensperger to “find” enough votes to flip the state’s results in his favor.

Dean said Trump’s conduct with respect to Georgia was “the most egregious” and said he went on a “relentless attack” against officials in the state. She then threw up four different Trump tweets in which he described Georgia Gov. Brian Kemp as “hapless” and called him and Raffensperger “fools” and a “disaster” who “don’t have a clue.”

As a result of those attacks, Dean noted, Raffensperger and his family received death threats and feared for their safety. Georgia’s chief election official, Gabriel Sterling, also publicly called on Trump to “stop inspiring people to commit potential acts of violence” and warned that “someone’s going to get killed.”

The threats against Raffensperger were public knowledge. But in the days after, Dean said, instead of condemning the attacks, Trump “doubled down.”

She then played a video montage of Trump claiming there was “massive fraud” in Georgia and saying Raffensperger was “an enemy of the people.”

“This was attack after attack in the face of clear threats of violence,” Dean said.

The Pennsylvania lawmaker later choked up as she recalled what it was like being trapped in the Capitol while Trump’s supporters stormed the building to hunt down members of Congress and then-Vice President Mike Pence. The attack “never would’ve happened but for Donald Trump,” she said.

“And so they came, draped in Trump’s flag, and used our flag, the American flag to batter and to bludgeon,” Dean said. “And at 2:30 [on January 6], I heard that terrifying banging on House chamber doors. For the first time in more than 200 years, the seat of our government was ransacked on our watch.”

TA: Bitcoin Corrects Lower, Why 100 SMA Is The Key For Fresh Increase
Technology