Town hall debate to be replaced by dueling town halls

(CNN Business)Dueling town hall events, with Democratic presidential nominee Joe Biden on ABC and President Donald Trump on NBC, may be on the air this Thursday, since the town hall-style debate between the two men is off.

As with almost everything involving Trump, though, his plans are subject to change.
Trump’s team is in talks with NBC about a town hall, according to multiple sources familiar with the planning. “Today” show co-host Savannah Guthrie would be the likely moderator. But the event is conditioned on the president testing negative for the coronavirus, the sources said.

The town hall will likely be in an outdoor setting in Miami, just like the one NBC recently hosted with Biden, the sources added.
So far there has been no announcement by NBC — a network where Trump used to work, but with a news division he routinely assails, whose parent company Comcast he calls “Concast” — or the campaign.

Biden’s plan is more concrete. He is set to participate in a town hall on ABC, moderated by George Stephanopoulos, Thursday at 8 p.m. Eastern.
ABC and the Biden campaign announced the event on October 8, the same hectic day that the debate commission shifted the long-scheduled debate to a “virtual” format, in light of Trump’s coronavirus illness. Trump hastily said he would not attend, and his campaign aides lashed out at the Commission on Presidential Debates for changing the format without any consultation.
So the Biden camp called up ABC, which produced a town hall with Trump in September and had been wanting to do the same with Biden.
“He, Donald Trump, refused to participate in a virtual town hall so we instead scheduled a national network town hall so Joe Biden can take questions from voters,” Biden’s deputy campaign manager Kate Bedingfield said on CNN’s “State of the Union.”
The Trump campaign, which is lagging badly in the polls, maneuvered to get the debate back on the calendar and in-person. At one point the campaign proposed moving the two remaining debates back one week each, to October 22 and 29.
But the bipartisan commission has not publicly entertained that proposal. And the Biden campaign has rejected it, with Bedingfield arguing that “we all agreed to these dates back in June, and we’re not going to let him try to rewrite the rules at the last second.”
On October 9, the commission called off the town hall debate. “Both candidates have agreed to participate in the October 22 debate,” the commission noted.
Commission member Newton Minow, sometimes described as the father of TV debates, told The New York Times: “In seven decades of televised presidential debates, this is the first debate to be cancelled. The loser is the American voter.” 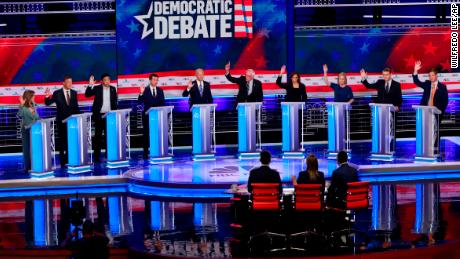 Republican party officials and Fox commentators have bashed the commission in recent days. Republican National Committee chairman Ronna McDaniel said on CBS that the “corrupt” commission “interfered with our ability to see these two candidates debate.”
“There are Republicans on that commission,” moderator Margaret Brennan said, “and that decision was made in due in part to health concerns.”
“Well, they’re not nonpartisan Republicans,” McDaniel claimed. “Those Republicans have been very critical of this president.”
The messaging from Trump allies has been all over the place, with White House deputy communications director Brian Morgenstern saying on Sunday that the commission should reschedule the debate that was scrapped due to Trump’s decision to withdraw.
“The President is ready to debate and his doctors have cleared him for participating in public engagements,” Morgenstern told reporters Sunday. “They’ve said he’s no longer a risk for transmission so it would be nice if the commission would get the debate back on the schedule.”
Otherwise, Morgenstern said, Trump will hold a town hall — an allusion to the NBC event.
Trump campaign senior adviser Jason Miller said Friday on Fox that “we’re actually going to be on multiple networks at the same time” as Biden.
That’s because NBC will simulcast the Trump town hall on its cable properties MSNBC and CNBC, the same way it aired its October 5 event with Biden. That event totaled 6.7 million viewers on TV and was also shown on NBC and Telemundo’s digital platforms.
“We’re gonna have a much bigger audience than Joe for next Thursday,” Miller added.
The planned town hall-type debate would have reached at least 60 million viewers, judging by the ratings for September’s debate and past election cycles.

Both Biden and Trump will be settling for much smaller audiences by having their town halls on Thursday.
– CNN’s Kaitlan Collins, Jason Hoffman, and Arlette Saenz contributed reporting
Source: Read Full Article