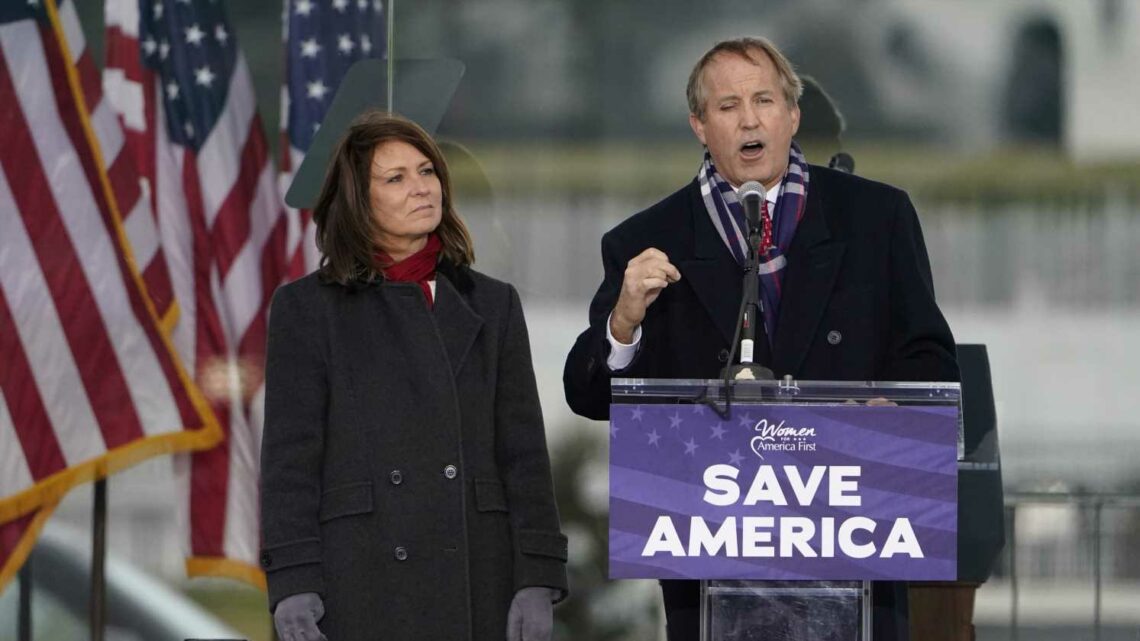 Texas Attorney General Ken Paxton, with his wife state Sen. Angela Paxton at his side, speaks Wednesday in Washington at "Save America Rally" in support of President Donald Trump. (Photo: Jacquelyn Martin, AP)

DALLAS — The Texas bar association is investigating whether state Attorney General Ken Paxton’s failed efforts to overturn the 2020 presidential election based on bogus claims of fraud amounted to professional misconduct.

The State Bar of Texas initially declined to take up a Democratic Party activist’s complaint that Paxton’s petitioning of the U.S. Supreme Court to block Joe Biden’s victory was frivolous and unethical. But a tribunal that oversees grievances against lawyers overturned that decision late last month and ordered the bar to look into the accusations against the Republican official.

The investigation is yet another liability for the embattled attorney general, who is facing a years-old criminal case, a separate, newer FBI investigation, and a Republican primary opponent who is seeking to make electoral hay of the various controversies. It also makes Paxton one of the highest profile lawyers to face professional blowback over their roles in Donald Trump’s effort to delegitimize his defeat.

A spokesman for the attorney general’s office did not respond to requests for comment. Paxton’s defense lawyer, Philip Hilder, declined to comment.

Kevin Moran, the 71-year-old president of the Galveston Island Democrats, shared his complaint with The Associated Press along with letters from the State Bar of Texas and the Board of Disciplinary Appeals that confirm the investigation. He said Paxton’s efforts to dismiss other states’ election results was a wasteful embarrassment for which the attorney general should lose his law license.

“He wanted to disenfranchise the voters in four other states,” said Moran. “It’s just crazy.”

Texas’ top appeals lawyer, who would usually argue the state’s cases before the U.S. Supreme Court, notably did not join Paxton in bringing the election suit. The high court threw it out.

Paxton has less than a month to reply to Moran’s claim that the lawsuit to overturn the results in Georgia, Michigan, Pennsylvania and Wisconsin was misleading and brought in bad faith, according to a June 3 letter from the bar. All four of the battleground states voted for Biden in November.

From there, bar staff will take up the case in a proceeding that resembles the grand jury stage of a criminal investigation. Bar investigators are empowered to question witnesses, hold hearings and issue subpoenas to determine whether a lawyer likely committed misconduct. That finding then launches a disciplinary process that could ultimately result in disbarment, suspension or a lesser punishment. A lawyer also could be found to have done nothing wrong.

The bar dismisses thousands of grievances each year and the Board of Disciplinary Appeals, 12 independent lawyers appointed by the Texas Supreme Court, overwhelmingly uphold those decisions. Reversals like that of Moran’s complaint happened less than 7% of the time last year, according to the bar’s annual report.

Claire Reynolds, a spokeswoman and lawyer for the bar, said state law prohibits the agency from commenting on complaints unless they result in public sanctions or a court action.

The bar’s investigation is confidential and likely to take months. But it draws renewed attention to Paxton’s divisive defense of Trump as he and Texas Land Commissioner George P. Bush vie for the former president’s endorsement in the Republican primary to run for attorney general in 2022.

On the Democratic side, Joe Jaworski, the former mayor of Galveston, has said he’ll run. Moran said Jaworski is a friend but that he played no role in the complaint against Paxton.

President Joe Biden delivers his inaugural address after he was sworn-in as the 46th President of the United States on the West Front of the U.S. Capitol in Washington, Wednesday, Jan. 20, 2021. (Photo: Erin Schaff/The New York Times via AP, Pool)

Paxton’s election challenge was filled with claims that failed to withstand basic scrutiny. A succession of other judges and state elections officials have refuted claims of widespread voter fraud, and Trump’s own Justice Department found no evidence of fraud that could have changed the election’s outcome.

Nonetheless, Paxton’s lawsuit won him political and financial support from Trump loyalists at a time when fresh allegations of criminal wrongdoing led many in the state GOP to keep their distance from the attorney general.

Last fall, eight of Paxton’s top deputies mounted an extraordinary revolt in which they accused him of abusing his office in the service of a wealthy donor. The FBI is investigating their claims.

Paxton has denied wrongdoing and separately pleaded not guilty in a state securities fraud case that’s languished since 2015. He has also used his office in ways that have benefited allies and other donors.

The new criminal allegations prompted an exodus of the top lawyers from Paxton’s office. But Solicitor General Kyle Hawkins was still serving as Texas’ top appellate lawyer at the time of the election lawsuit.

Although the solicitor general usually handles cases before the U.S. Supreme Court, it was a private Washington, D.C.-based lawyer who brought the election challenge with Paxton. Hawkins has since moved to private practice. A spokesman for his firm said “we can’t help you” with questions about why he didn’t handle the suit.