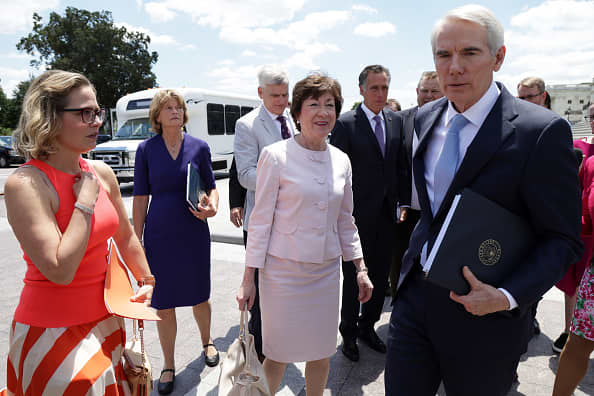 Senators hope to forge ahead with bipartisan infrastructure bill this week

The Senate faces a time crunch to pass President Joe Biden's sweeping agenda, as senators try this week to finalize and advance a bipartisan infrastructure package.

Democratic and Republican lawmakers aim to release as soon as Monday a bill that would put $579 billion in new funds into transportation, broadband and utilities. Disputes over issues including transit funding have prevented senators from finalizing the legislation.

"We're about 90% of the way there," Sen. Rob Portman of Ohio, the lead GOP negotiator, told ABC's "This Week" on Sunday. He added that he feels "good about getting it done this week," and pointed to transit money as the biggest roadblock toward a deal.

Democratic senators and White House officials have sent the GOP side a counteroffer that would address all remaining sticking points, NBC News reported Monday. It is unclear if Republicans will accept the proposal.

Republicans voted against advancing the framework in the Senate last week while the group tried to finish the bill. Senate Majority Leader Chuck Schumer, D-N.Y., can bring up the procedural vote again once senators release the legislation.

Democratic leaders are rushing to pass both the infrastructure plan and a second partisan bill that would invest in child care, education and efforts to curb climate change. Biden views both pieces of his agenda as vital to boosting the economy and creating a stronger social safety net as the U.S. emerges from the wreckage of the coronavirus pandemic.

Schumer aims to make progress on both fronts in the coming weeks. He hopes to pass both the bipartisan bill and a budget resolution — which would allow his party to approve its $3.5 trillion plan without any Republican votes in the Senate split 50-50 by party — before the chamber leaves for its August recess.

The Senate plans to leave Washington from Aug. 9 to Sept. 10. Schumer has said he will keep the chamber in session for as long as it takes to pass the infrastructure bill and budget resolution.

House Speaker Nancy Pelosi, D-Calif., has said she will not take up either proposal until the Senate passes both. The strategy has sparked concerns among Republicans who worry a vote for the bipartisan plan will give Democrats' $3.5 trillion package a better chance of passing, and among centrist Democrats who are not yet comfortable with their party's developing proposal.

Rep. Josh Gottheimer, a New Jersey Democrat who has worked with senators on the infrastructure plan, told CNBC on Monday that he will push for a separate House vote on the bipartisan bill if it gets through the Senate.

"If we get that done, which I think we will and I'm confident we will, I think we should get a stand-alone vote in the House," he said.

Pelosi on Sunday reiterated her strategy to take up both bills together.

"I won't put it on the floor until we have the rest of the initiative," she told "This Week."

With narrow majorities in both chambers, Democrats have to keep their caucuses unified behind two massive spending bills. To get through the Senate, the bipartisan plan would need votes from all 50 Democrats and at least 10 Republicans.

Schumer will need to get every member of his caucus to back the reconciliation bill. Democratic Sen. Joe Manchin of West Virginia, among others, has expressed concerns about the cost of the plan.

Democrats also hold a narrow 220-211 majority in the House.

How To Buy Sol Crypto?