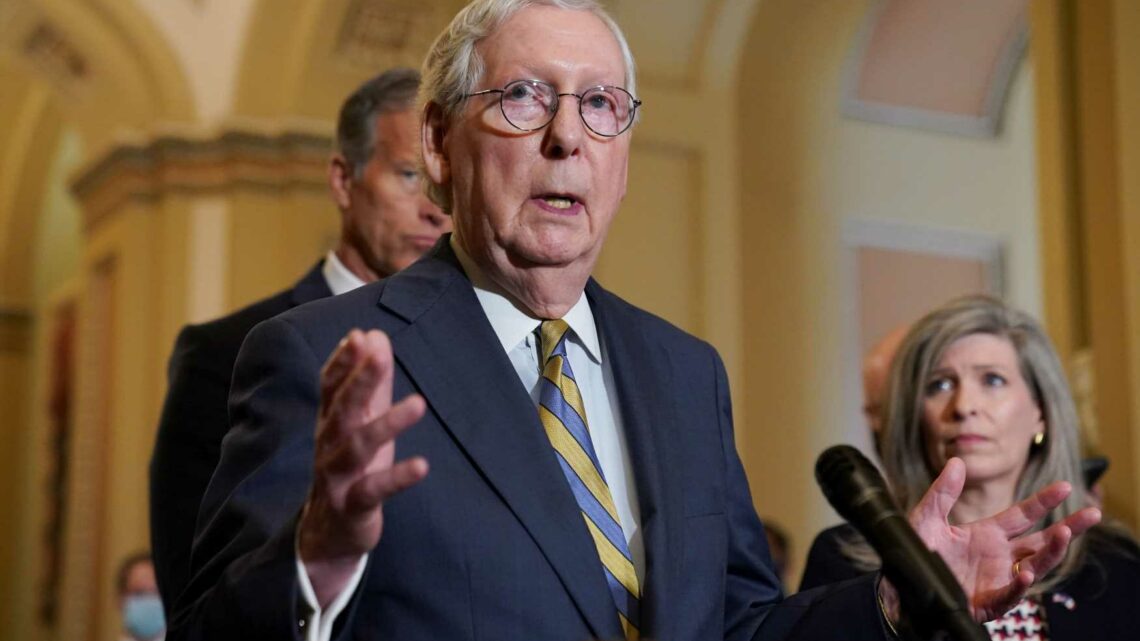 Senate Minority Leader Mitch McConnell on Wednesday offered a short-term suspension of the U.S. debt ceiling to avert a national default and economic crisis until Democrats are able to pass a more permanent solution before the end of the year.

"To protect the American people from a near-term Democrat-created crisis, we will also allow Democrats to use normal procedures to pass an emergency debt limit extension at a fixed dollar amount to cover current spending levels into December," he said in a statement posted to Twitter.

"This will moot Democrats' excuses about the time crunch they created and give the unified Democratic government more than enough time to pass standalone debt limit legislation through reconciliation," the Kentucky Republican added.

The development came as President Joe Biden and Democratic leaders in Congress amped up pressure on Republicans to act on the debt limit.

The stopgap offer from McConnell would take some pressure off both parties to reach a compromise by Oct. 18, when the Treasury Department estimates the U.S. will otherwise exhaust its emergency efforts to pay the government's bills.

Republicans and Democrats have clashed in recent weeks over how best to raise or suspend the federal borrowing limit and it was not immediately clear if House Speaker Nancy Pelosi, D-Calif., or Senate Majority Leader Chuck Schumer, D-N.Y., would be open to McConnell's potential plan.

Representatives for Pelosi and Schumer did not immediately respond to CNBC's request for comment.

McConnell and Schumer are set to meet later Wednesday, according to Texas Republican Sen. John Cornyn, which could lead to greater clarity on a possible agreement.

During the past week, the White House has significantly ratcheted up pressure on Republicans in Congress.

On Monday, Biden said Republicans' refusal to join Democrats in voting to suspend the debt limit was "hypocritical, dangerous and disgraceful," especially after they voted several times to do so during former President Donald Trump's four years in office.

"Not only are Republicans refusing to do their job, but they're threatening to use their power to prevent us from doing our job — saving the economy from a catastrophic event," Biden said.

On Wednesday, Biden said much the same thing during a White House event with Fortune 50 CEOs, focused on the dire consequences of a credit default.

The White House has yet to respond to McConnell's offer, and will likely defer to Schumer and Pelosi to formally accept of reject it.

And while it's unclear exactly how the Republican proposals came together, Biden said on Monday that he planned to speak to McConnell in the coming days.

Biden and McConnell have a longstanding relationship of mutual respect built over decades serving in the Senate. During the Obama administration, Biden served as an informal liaison between the Obama White House and the Republican controlled Senate.

If Democrats accept McConnell's offer, as they are expected to, the GOP leader will have effectively blunted the chief line of attack from Democrats: That Republicans were standing in the way while Democrats worked to avoid a catastrophic default.

If they take the deal, Democrats would also commit to raising — instead of suspending — the debt limit through a reconciliation bill. Suspensions allow the government to float new debt for a certain period of time instead of capping it at a certain dollar figure.

Politicians often prefer to suspend because it looks better ahead of elections.

Democrats would likely have to hike the ceiling to an enormous sum at or north of $30 trillion. And while both Republicans and Democrats are responsible for the total debt, raising the limit makes Democrats vulnerable to accusations of reckless, debt-financed spending in the 2022 midterms.

An ocean full of containers: How toy companies are grappling with shipping delays this holiday season
Technology