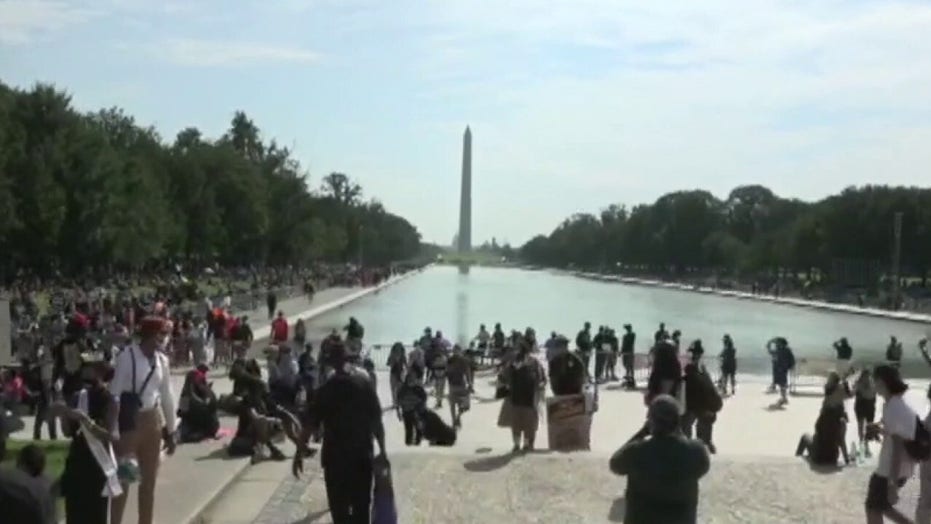 One day after President Trump falsely and absurdly boasted that he has done more for Black Americans than any president except Abraham Lincoln, thousands of protesters gathered in Washington to demonstrate against America’s systemic racism that Trump exploits for political gain.

The aptly named Get Your Knee Off Our Necks March — evoking the brutal murder of handcuffed Black man George Floyd by a White Minneapolis police officer who knelt on the helpless Floyd’s neck for nearly nine minutes on Memorial Day — was held Friday, exactly 57 years after the Rev. Martin Luther King Jr. led a March on Washington on Aug. 28, 1963.

King, like Floyd, was a murder victim — assassinated in 1968 at only 39 years old. On the March on Washington that he led in 1963, he captured America’s imagination with his stirring “I Have a Dream” speech calling on our nation to live up to the words of the Declaration of Independence that “all men are created equal.”

A year later King was instrumental in working with President Lyndon Johnson (who did far more for Black Americans than Trump) to enact the landmark 1964 Civil Rights Act.

Right now, in the age of Trump, America is sharply divided.

On one side, Trump screams about “law and order” but ignores the racial and social inequities impeding America from reaching its promise of being a more perfect union. He seeks to divide Americans against each other — denouncing protests against racism that have sometimes turned violent, and stoking fears of white suburbanites that their communities will be destroyed by low-income housing (code for an invasion of dangerous Black people).

On the other side stands a group of individuals who Dr. King called a Coalition of Conscience — Americans of all races committed to making this nation more just, fair and equitable for everyone living here.

This Coalition of Conscience is what is truly leading the way to Make America Great Again — not the forces of division that Trump seeks to mobilize as he desperately struggles to win reelection.

Trump is faced with a coronavirus pandemic that he has horribly mismanaged and that has claimed the lives of more than 182,000 Americans, and an economy in shambles due to shutdowns to combat the spread of COVID-19. So the president know he needs another issue to mobilize maximum voter turnout by his base

Friday’s March on Washington was about strengthening the continued commitment of the American people to making our country a more just and equitable nation for all of us.

Trump has settled on fearmongering to pave his way to another four years in the White House. His argument to voters — which makes no sense, when you think about it — is that the increased crime and protests that have turned violent under his watch can only be stopped by reelecting him.

The president tells us that absolutely nothing that goes wrong while he is in office is his fault, ridiculously claiming he has accomplished more than any president in American history in his first term. He demonizes Democratic presidential nominee and former vice president Joe Biden as somehow being responsible for all of America’s ills, and predicts disaster if Biden is elected president.

But Donald Trump is not the Great American Hero he pretends to be. The heroes are people like those who showed up for the March on Washington on Friday, marching our nation forward.

These brave Americans are willing to stand up and fight back nonviolently against unjust laws and policies, even if those laws have no bearing on their own lives.

They are the mothers who stood between unidentified law enforcement officers in Portland, Ore., and peaceful protesters.

They are the West Virginia educators who put themselves and their livelihoods on the line when they walked out of their classrooms in 2017 for better school conditions for vulnerable students and families.

Over the past couple of months, we have heard numerous people quote Dr. King and try to bend his words in their favor. However, the truth remains that if King were alive today, he would be in the mighty Coalition of Conscience opposing Trump and fighting for justice.

During his address on that sweltering August day in 1963, King was crystal clear on what was necessary to make America more just: an end to police brutality and racism.

The great civil rights leader told us 57 years ago that “as we walk, we must make the pledge that we shall always march ahead. We cannot turn back. There are those who are asking the devotees of civil rights, ‘When will you be satisfied?’ We can never be satisfied as long as the Negro is the victim of the unspeakable horrors of police brutality…. No, no we are not satisfied, and we will not be satisfied until ‘justice rolls down like waters, and righteousness like a mighty stream.’”

Sadly, despite great progress in the struggle for racial justice since King began his crusade in the 1950s, police brutality and systemic racism still plague America today.

The March on Washington on Friday comes on the heels of the tragic murders by police of Floyd, Breonna Taylor, Rashad Brooks and other Black Americans — and just days after a White policeman in Kenosha, Wis., shot Jacob Blake in the back seven times at point-blank range, paralyzing Blake for life.

Now a majority of Americans question whether we are living up to the dream that Dr. King laid out 57 years ago. This is what drove thousands of protesters to the National Mall on Friday demanding justice, pleading for reforms, and hoping to reunite a divided country by expanding our Constitution’s guarantees to all.

Filled with powerful speeches — including by relatives of Black people unjustly attacked by police — Friday's march should encourage members of Congress and Trump to support reforms that would swiftly end over-policing, excessive use of force, and other forms of injustice.

That is what happened 57 years ago when Dr. King and civil rights giants Bayard Rustin, John Lewis, A. Philip Randolph, and Whitney Young marched on Washington. President John F. Kennedy listened to their call for justice and acted on meaningful civil and human rights reforms. President Johnson followed in Kennedy’s footsteps to make further advances, after Kennedy’s assassination on Nov. 22, 1963.

Today we have a president who is the polar opposite of Kennedy and Johnson, dividing American against American and littering our consciousness with lies, trafficking in baseless conspiracy theories, and unwilling to hear the voices of countless Americans pushing this nation to be better.

And instead of promoting voting rights — as Martin Luther King, Presidents Kennedy and Johnson, and all subsequent Democratic presidents did — Trump is disgracefully seeking to suppress the votes of Black and Brown people and anyone else he fears will vote against his reelection.

Trump and his Republican supporters in state and local governments have shut down election precincts in Black and Brown neighborhoods and created artificial barriers like voter ID requirements, exact signature matching requirements, and purging of voter rolls to keep people voiceless.

And now Trump has done everything in his power to sabotage the U.S. Postal Service to slow mail delivery to make it difficult to conduct mail-in-balloting during the coronavirus pandemic.

Trump has made it clear with his actions that he will do anything and everything in his power to try to make it nearly impossible for Americans other than his supporters to have a say in this country’s democracy.

Friday's March on Washington was about strengthening the continued commitment of the American people to making our country a more just and equitable nation for all of us. The march codified Dr. King's dream of pushing America closer to being a more perfect union.

In the upcoming election, each American will need to choose whose side he or she will be on. The choice should be clear.

America is only great because our people make it so. Instead of holding onto hard and immovable positions, we must listen to today’s Coalition of Conscience and its calls for justice and equity, because these calls will lead our nation toward what we pledge allegiance to — a nation “with liberty and justice for all.”

Ethereum Classic Hit By Third 51% Attack in a Month