Republicans on Capitol Hill aren’t outright saying the 2020 election was stolen. They’re just saying it may have lacked “integrity” and that the people who think it was stolen have a point.

Republicans invited Jan Jones, the speaker pro tempore of the Georgia House of Representatives, to defend the law before the Senate Judiciary Committee.

“We are making it easier to vote, harder to cheat, and ensuring every legal vote counts,” said Jones, a Republican.

Republicans in state legislatures and in Congress have embraced “easier to vote, harder to cheat” as their top slogan on voting policies — a phrase that implies there has been cheating, even though the Trump campaign couldn’t substantiate any of its claims about fraud in the last election.

When committee chair Sen. Dick Durbin (D-Ill.) asked Jones if there had been voter fraud in Georgia as Trump alleged, Jones wouldn’t say.

“I’m here to discuss what’s in Senate Bill 202,” she said, referring to the state’s new law.

“I’m trying to understand the logic behind new voting laws,” Durbin said, asking again why the state would change the law if the election was sound. Jones refused to explain the logic.

That logic is clear. Trump lied about the results of the 2020 election. He claimed there was mass voter fraud — particularly in cities and suburbs with large Black populations — when there was none. The former president lied in the run-up to election day and in the immediate aftermath of the election. He first called for the votes cast in predominantly Black precincts to be invalidated by courts and then pressured elected Republicans to simply change the election results. His lies ultimately led to a violent insurrection at the U.S. Capitol, an attempt to halt the peaceful transfer of power. 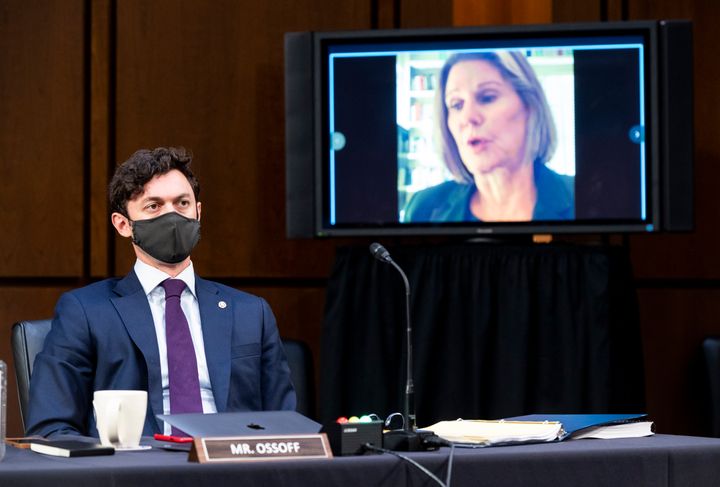 Trump’s lies failed to overturn the 2020 election, but many states run by Republicans responded by advancing and enacting laws to reduce voting access or make it harder for certain communities to vote.

Georgia’s new law expands access to early voting in rural communities, but it reduces early and mail-in voting access in cities and heavily populated suburbs where the majority of Black Georgians reside. It also adds new voter identification requirements for voting by mail, lets a single person object to an unlimited number of ballots cast and allows the partisan legislature to override local election officials, including by removing them and installing preferred replacements.

Georgia isn’t the only state where new restrictions are coming on the heels of Trump’s lies. In Montana, GOP Gov. Greg Gianforte signed a law ending same-day registration and removing student IDs from a list of acceptable identifications, moves clearly aimed at reducing voting access to a group that votes more heavily for Democrats. Republicans in Florida, Michigan and Texas, among other states, are similarly advancing legislation to restrict voter access and hand election administration powers to partisan legislatures.

All of this comes after an election that was held with minimal problems and record voter turnout, despite falling during a once-in-a-century pandemic. The only issues that could justify these new restrictive laws were those fabricated by the former president.

Committee Republicans did not want to talk about the origin of these laws or Trump’s lies. Instead, they focused on the admittedly provocative title of the committee hearing: “Jim Crow 2021: The Latest Assault on the Right to Vote.”

It wasn’t the laws lessening voter access that shocked Republicans, but rather that Democrats would dare compare them to the race-based voter restrictions of the Jim Crow era in the states of the former Confederacy. Sen. Mike Lee (R-Utah) said he was “disappointed … and, frankly, shocked” by the reference.

The hearing comes after weeks of Republican complaints about President Joe Biden calling the Georgia election law worse than Jim Crow. Biden was echoing critiques made by Black politicians in the state, including Democratic Sen. Raphael Warnock, who called the law “Jim Crow in new clothes.”

“Let me concede, at the outset, that Jim Crow, at its worst, was more violent than the situation we face today,” Durbin said earlier in the hearing.

“The bottom line, and the question that we are addressing with this hearing, is whether there is a design or an intent in legislation that is being considered and passed in many states, including the state of Georgia, to limit or restrict the right to vote of minority populations with the intent of having influence on the outcome of the election,” Durbin added. “I think that goes without saying.”

But Lee was intent on arguing Republican innocence on issues of voting rights and race, stating the historically accurate fact that Republican politicians enacted the 13th, 14th and 15th amendments and that Southern Democrats enacted the Jim Crow laws.

Durbin did not disagree with Lee, but added that the parties had each changed their stances on race, civil rights and voting rights during the 20th century. Lee replied that “it’s not fair” to say the Republican Party abandoned its historic positions on civil and voting rights. (One example of the party’s realignment on race: former Republican Sen. Trent Lott saying in 1984 “that a lot of fundamental principles that Jefferson Davis believed in are very important to people all across the country, and they apply to the Republican Party.” )

The Democrats’ expert witnesses said it was fair to view the new voting restrictions through a historical lens. Sherrilyn Ifill of the NAACP Legal Defense Fund drew a line from the Civil War to the voter fraud lies that resulted in a pro-Trump mob marauding through the Capitol in January.

“It has become disturbingly and abundantly clear that this country was brought to the brink of disaster by coddling and nurturing the very forces that nearly destroyed this country more than a century ago,” Ifill said.

Iowa Sen. Chuck Grassley, the committee’s top Republican, said in his opening remarks that Jones, the Georgia lawmaker, would set the record straight about the state’s new law. “Not the made-for-CNN headlines about Jim Crow 2021, but the sensible, fair, and common-sense efforts they have made to increase confidence in their elections,” Grassley said.

After the hearing, HuffPost asked Grassley what he thought of Jones refusing to say whether the 2020 election had been tainted by fraud. “I got nothing to say about that,” he said.

Committee member Lindsey Graham (R-S.C.) told HuffPost he didn’t catch Jones refusing to say the election had been clean. When asked if the Republican Party’s push for “election integrity” itself casts doubt on the last election, Graham would only speak for himself.

“I voted to certify the Georgia elections,” he said. “I think there’s some real concern about signature verification, but I accepted the certification.”