“The protest is causing major disruption to local businesses. At this time, 13 people have been arrested in connection with the incident, and we anticipate more arrests will be made,” Hertfordshire police said in a statement.
Member of Extinction Rebellion, also known as XR, blocked printworks responsible for printing papers such as News Corp’s The Sun and The Times, along with The Daily Mail, published by Associated Newspapers in Broxbourne, greater London and in Liverpool. 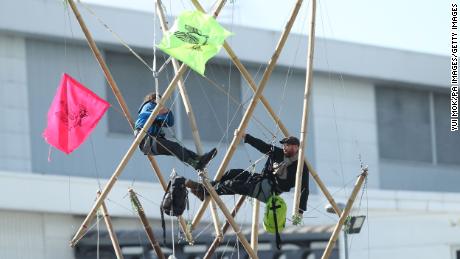 “The groups are using disruption to expose the failure of these corporations to accurately report on the climate and ecological emergency, and their consistent manipulation of the truth to suit their own personal and political agendas,” XR said in a statement.
XR said its activists targeted the newspapers owned by media mogul Rupert Murdoch because “the right-wing media is a barrier to the truth, failing to reflect the scale and urgency” of the climate crisis.

“They distract us with hate and maintain their own power and wealth, profiting from our division. We can’t move forward until this barrier falls,” the group added.
The Times newspapers said on Twitter: “We apologize to readers who may be unable to buy their usual newspaper this morning. Overnight printing of The Times was disrupted by Extinction Rebellion alongside other newspapers. We are working to get newspapers delivered to retailers as soon as possible.”
Prime Minister Boris Johnson also criticized the protests, writing on Twitter: “A free press is vital in holding the government and other powerful institutions to account on issues critical for the future of our country, including the fight against climate change.
“It is completely unacceptable to seek to limit the public’s access to news in this way,” he said.
Murdoch’s son, James, this year lashed out against his father’s sprawling media empire for how it covers the climate crisis. In comments made to The Daily Beast, a spokesperson for James Murdoch and his wife spoke of the couple’s “frustration” with News Corp coverage of climate.
James Murdoch later broke from the family business in July and said he was exiting the company over “disagreements over certain editorial content published” by its news outlets and “certain other strategic decisions.”

Murdoch’s News Corp owns a large chunk of Australia’s media and has been criticized for coverage that suggested recent wildfires were no worse than they’d been in the past or that they are caused by arsonists, not climate change.
The News Corp umbrella includes papers such as The Wall Street Journal and New York Post, a raft of newspapers in the United Kingdom and Australia, and the book publisher HarperCollins.
Source: Read Full Article

Two kids, no support system and $167 in unemployment benefits: One single mom's plight in the age of Covid-19